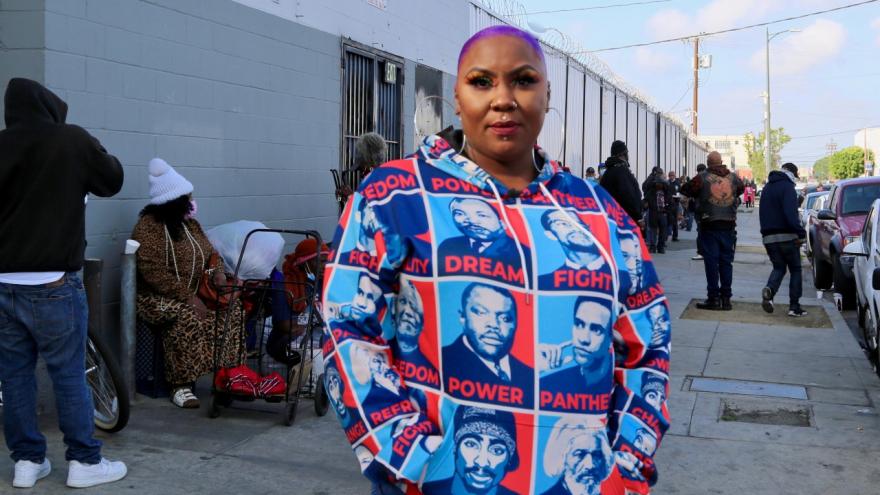 Editor's note: Know someone who inspires you? Click here to nominate them as a CNN Hero.

(CNN) -- Before the Covid-19 health and economic crisis, the nation's homeless population was already on the rise.

Now, more than a year after the last official population count, many of those working with homeless communities believe numbers are much higher.

"I would estimate we've got about 8,000 people who are sleeping out on the streets or in some of the shelters," said Shirley Raines, whose non-profit serves the homeless community on Skid Row in downtown Los Angeles. By the last official count in early 2020, more than 4,500 individuals resided in the roughly 50-block area.

"There are more women on the street than before," Raines said, noting that a women's shelter had closed down amid the pandemic. "The resources had dried up."

Existing data does not reflect the devastating impact of the pandemic. But if Raines's estimate is accurate, that's a Skid Row surge of more than 40 percent since Covid-19 hit.

For the past six years, Raines and her organization, Beauty 2 the Streetz, have been a mainstay on Skid Row, providing food, clothing, hair and makeup services -- and most recently health and hygiene items -- to thousands of people.

Rain or shine, she sets up "shop" weekly at the corner of 5th and Townes to serve those she calls "Kings" and "Queens." Her goal: to make the homeless feel human, whether that means a haircut, a facial, a hearty meal, or a hug.

Raines, who for years struggled with financial insecurity, grief and loss after the death of her first son, says she knows how it feels to be labeled.

"The world looked at me and thought probably the same thing they think about the homeless when they pass them by," she said. "You never know what anyone's going through, you know?"

In 1990, Raines' then 2-year-old son Demetrius was staying with Raines' grandmother when he accidentally ingested medication and was hospitalized.

"I blamed myself for not having stability. If only I'd had my own backyard. If only I'd had my stuff together," Raines said. "The woman who had given me so much in life was also the cause of my greatest loss. And how do you rationalize that as a 20-year-old? You don't. You break inside."

Soon after, Raines also faced the loss of her grandmother and then her son's biological father to cancer.

"I just fell apart. I lived a very unhappy life. I couldn't keep anything together," she said. "I'm telling you, anything that I could do to get myself out of this planet, this world, I tried it. And I'm still here, you know? And I'm like, 'What is this about?'"

After struggling with anxiety and panic disorder for decades, it was Raines' twin sister who stepped in, urging Raines to find a purpose for her pain.

That purpose came in 2017 when Raines joined a church group on a feeding mission.

"I went to Skid Row, I'm like, 'Oh, this is where all the broken people are? Oh, I've been looking for y'all all my life," she said. "I never wanted to leave. It's a place where people have amazing hearts, but nobody can see it because they can't see the forest for the trees."

At first, Raines, who sports brightly colored hair and makeup, passed out clothing, food and water. But when several Skid Row residents complimented her appearance, she offered to do their hair and makeup.

Raines saw the immediate lift in their spirit when their souls were cared for.

"It plants a little bit of self-esteem in them, so they feel like, OK, maybe no one knows I'm homeless because I have a fresh cut," she said.

Early on, Raines teamed up with a community group of motorcycle enthusiasts called 'Fighters for The World MC' who accompany her on Skid Row to provide safety and structure.

"They're like big brothers," Raines said. "A lot of the homeless would get lost. They couldn't find us, but they learned to follow the sounds of the bikes."

As Raines' efforts evolved into a full-scale operation, with music playing and lines forming around the block, she began providing more supplies and essentials: rape whistles, tents, sleeping bags, hygiene items -- and she teamed up with local health officials to offer more services.

Heidi Behforouz, medical director for Housing for Health, a program of the L.A. County Department of Health Services, has worked with Raines on the streets and says "she is giving people hope, a break, dignity, some fun ... just reminding us that we're all human."

"I think Shirley represents the best of us," Behforouz said. "There are common denominators that we all share. And I think it's critical in this moment, when we've all been through relative trauma, to have moments of peace, and happiness, and dignity."

Before the pandemic, Raines was making 400 meals a week in her one-bedroom apartment kitchen in Long Beach and driving three times a week to Downtown Los Angeles to feed and bring supplies to people.

Then, as Covid-19 affected many organizations' efforts, services dried up. But Raines pivoted, opting for bagged lunches and a tweaked schedule -- and she kept going.

"When I went out there, it was like a scene from The Walking Dead," Raines said. "All the resources had stopped. People stopped coming to feed. People were starving. Some people had socks tied around their face, around their nose."

Raines struggled to find enough drinking water and food to purchase, so she appealed to her followers over social media who stepped up with donations and supplies.

In tandem with the health department, which provided masks, sanitizer and PPE, Raines said her group and other L.A. County non-profits and community projects worked tirelessly to serve the unseen community.

"We just had to use our best judgment and figure out some ways to still keep them fed, while keeping them safe, and while keeping us safe," Raines said.

Today, as vaccination rates are on the rise and a sense of normality is returning, Raines is offering help by way of food and supplies twice a week and expanding partnerships with local groups to let this often-overlooked population know there is hope.

"My sun didn't come out for 30 years. It was 30 years' worth of tomorrows before I even saw the break of day. I would be lying if I said I was always completely happy from doing this. It didn't take away the pain of my son dying. But I've certainly gotten better. I can say his name now. He is the reason I do what I do."

Want to get involved? Check out the Beauty 2 the Streetz website and see how to help.

To donate to Beauty 2 the Streetz via GoFundMe, click here