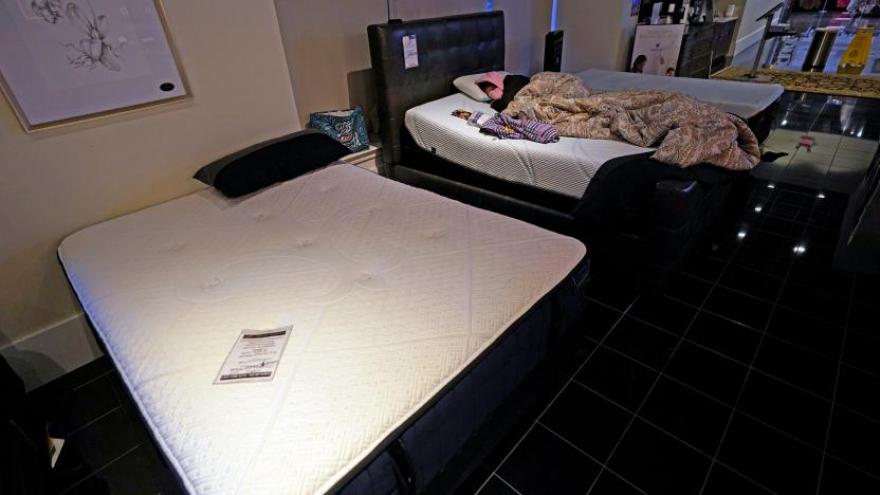 Dialina Gonzalez sleeps on a mattress inside a Gallery Furniture store which opened as a shelter in Houston.

(CNN) -- After two nights of staying in her condo on the southwest side of Houston without power, Felicia Maten had no running water, the food in her refrigerator was spoiling and her fingers and toes hurt from the cold. She huddled under blankets with her 65-year-old mother and 23-year-old daughter, together using their breath to warm themselves against frigid temperatures that weren't letting up.

The devastating week of freezing temperatures and winter storms left 1.3 million customers in Houston without power for days.

"We were in a dire situation," Maten said. "I was so scared, I didn't know what to do."

She drove around the area looking for a hotel. But she couldn't find an available room, and the roads were treacherous, she said.

Finally, a neighbor suggested she go to Gallery Furniture. The owner, Jim "Mattress Mack" McIngvale, opened one of his local stores as a shelter for Texas residents displaced by the winter storms.

Help many people, it turns out. During the three days the makeshift shelter was open this week, thousands of people came in for food and warmth and hundreds slept over, getting shut eye on furniture that his store will later sell at a discount, McIngvale said.

"It meant so much to have somebody who doesn't even know us care that much," Maten said. "That man is full of love."

This isn't the first time McIngvale has opened his doors to people displaced by weather emergencies. He did so during Hurricanes Katrina in 2005 and Harvey in 2017.

"We believe that we all have responsibility for the wel-lbeing of the community and when times get tough we try to open our doors and let Houstonians come in and regroup," McIngvale told Poppy Harlow and Jim Scuitto on CNN on Wednesday.

But until this week, he hadn't sheltered people in such cold temperatures or amid an ongoing pandemic.

McIngvale says he began preparing for the winter storm a week in advance by buying 15,000 gallons of diesel that would power the store's generator for a week or so. He implemented Covid-19 precautions by having security enforce hand sanitization and mask wearing.

McIngvale gets the word out about the shelter through the business' social media following and news coverage, he said. He and his employees made specific accommodations for people, such as those with babies who need bottles warmed or senior citizens who need oxygen tanks plugged in.

"He was serving food, handing out water, going around checking on people just like his employees and just like another person," said Jacy Wadhams, another Texas resident who sheltered at Gallery Furniture. "He really takes pride in what he does. He's an amazing person."

After the South Houston, Texas, hotel that Wadhams was staying at lost power, he and the other residents were asked to leave. With a dead cellphone, no cash to pay for food and clothing unsuitable for snow, he decided to call 211, the Texas hotline for emergencies.

A taxi was sent to take Wadhams to the George R. Brown Convention Center in downtown Houston. But the center was full, and he was soon told to get on a bus with some others, not knowing where it would take them.

"When I looked up out of the bus and saw the sign for Gallery Furniture, it was such a relief," said Wadhams, who knew of "Mattress Mack's" reputation for helping the community after living in the area for 15 years. "Everyone on the bus was like, 'Halleluiah.'"