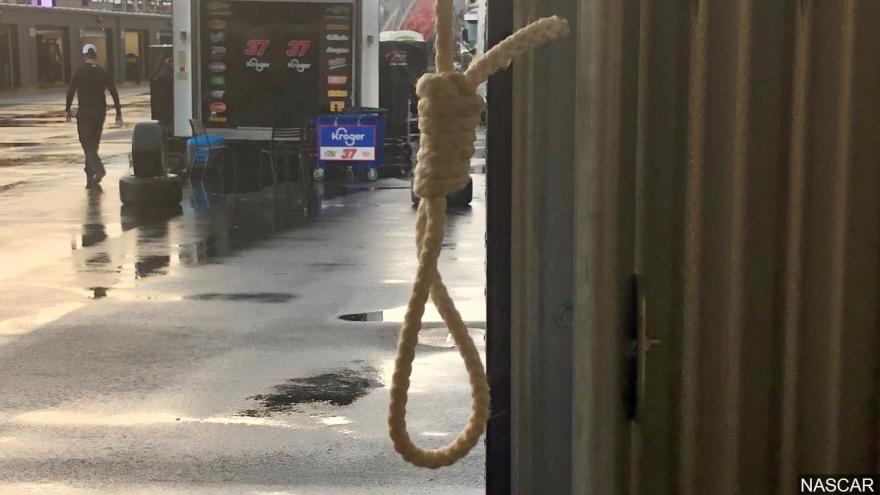 NASCAR has released a photo of the noose that was found hanging in Bubba Wallace's team garage at the Talladega Superspeedway last week.

(CNN) -- NASCAR has released a photo of the noose that was found hanging in Bubba Wallace's team garage at the Talladega Superspeedway last week.

It also said that a thorough sweep of the 29 tracks and 1,684 garage stalls at the speedway, authorities found 11 pull-down ropes tied in a knot -- but only one noose:

"The one discovered on Sunday in Bubba Wallace's garage," NASCAR president Steve Phelps said at a news conference Thursday.

Wallace is the only Black driver in NASCAR's top circuit.

"As you can see from the photo, the noose was real, as was our concern for Bubba," Phelps said.

He added that a just-concluded NASCAR investigation could not determine who tied the noose.

"How did the noose get there? Was anyone an intended target?"

The noose had been fashioned back in 2019. Phelps could not say why no one had reported it until this past weekend.

"We further determined that the noose was not in place when the October 2019 race weekend began but was created at some point during that weekend," Phelps said. "Given that timing and the garage access policies and procedures at the time, we were unfortunately unable to determine with any certainty who tied this rope in this manner or why it was done."

The discovery of the noose last week in Wallace's garage stall at Talladega came as the United States, and NASCAR in particular, more squarely address America's systemic racism in the wake of the police killing of George Floyd.

Wallace has been an outspoken advocate of the Black Lives Matter movement and the corresponding protests against racism and police brutality. The feds were called in to investigate.

On Tuesday, the FBI said the noose has been there since last year and Wallace, therefore, is not a victim of a hate crime.

"The investigation also revealed evidence, including authentic video confirmed by NASCAR, that the noose found in garage number 4 was in that garage as early as October 2019," the FBI said in a statement. "Although the noose is now known to have been in garage number 4 in 2019, nobody could have known Mr. Wallace would be assigned to garage number 4 last week."

On Sunday -- the day the noose was spotted -- NASCAR said it was outraged "by this heinous act" and that the sport has no place for racism. "We have launched an immediate investigation, and will do everything we can to identify the person(s) responsible and eliminate them from the sport," it said in a statement.

In his conference Thursday, Phelps said that in hindsight NASCAR should have used the word "alleged" when describing the finding of the noose and its reaction.

"What we saw was a symbol of hate and was only present in one area of the garage, that of the 43 car of Bubba Wallace," he said.

Phelps said that the heightened emotions surrounding the recent Confederate flag ban played a role in NASCAR's response. The original statement perhaps should have been toned down, he said.

Phelps specifically thanked Wallace for his leadership. Phelps asked that everyone needs to stand with him.

READ: Why the noose is such a potent symbol of hate