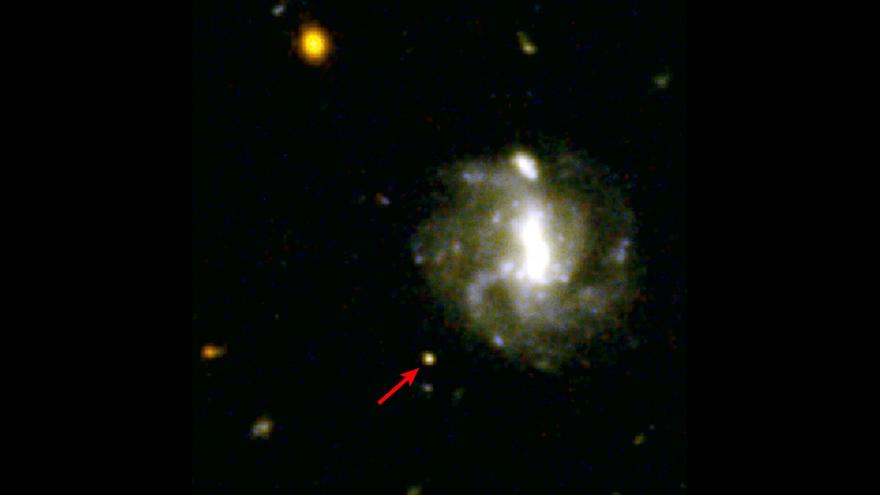 (CNN) -- The first observation of a collision between neutron stars, detected in August 2017, created gravitational waves, light and heavy elements like gold and platinum. But astronomers have realized they also witnessed a kilanova, the kind of explosion that creates gold and platinum, the year before as well.

The 2017 observation offered evidence for the theory that such massive explosions in space are responsible for creating large amounts of heavy elements. All of the gold and platinum found on Earth was likely created by ancient kilanovae that resulted from neutron star collisions.

Because astronomers were able to make a direct observation in 2017, it changed what they expected a kilanova to look like. So they took their observations and looked back at other events initially thought to be something else.

Specifically, they looked at an August 2016 gamma-ray burst. The event, named GRB160821B, was tracked minutes after detection by NASA's Neil Gehrels Swift Observatory.

The 2017 event wasn't tracked in its initial hours, adding intrigue to the 2016 event.

The new analysis of the 2016 event was published Tuesday in the journal Monthly Notices of the Royal Astronomical Society.

"The 2016 event was very exciting at first. It was nearby and visible with every major telescope, including NASA's Hubble Space Telescope. But it didn't match our predictions--we expected to see the infrared emission become brighter and brighter over several weeks," said Eleonora Troja, study author and associate research scientist in the University of Maryland's Department of Astronomy.

But the signal faded ten days after the event.

When the team went back and compared what the 2017 event looked like to the 2016 event, "it was a nearly perfect match," Troja said.

The team had observed a kilanova in 2016 without realizing it. The researchers now believe it was also the result of a neutron star collision., even though they can also result from a black hole and a neutron star merger.

The 2016 event detection doesn't have as much detail as the 2017 event, but their record from the first few hours revealed new insights about the kilanova's first stages. The astronomers were actually able to see the object that formed after the collision, which isn't available in the 2017 event.

"The remnant could be a highly magnetized, hypermassive neutron star known as a magnetar, which survived the collision and then collapsed into a black hole," said Geoffrey Ryan, study co-author and a Joint Space-Science Institute Prize Postdoctoral Fellow in the University of Maryland Department of Astronomy.

"This is interesting, because theory suggests that a magnetar should slow or even stop the production of heavy metals, which is the ultimate source of a kilonova's infrared light signature. Our analysis suggests that heavy metals are somehow able to escape the quenching influence of the remnant object."

Now, the researchers want to apply the insight they gained from this study to other previous events. This will also improve their observations of future events.

"The very bright infrared signal from this event arguably makes it the clearest kilonova we have observed in the distant universe," Troja said. "I'm very much interested in how kilonova properties change with different progenitors and final remnants. As we observe more of these events, we may learn that there are many different types of kilonovae all in the same family, as is the case with the many different types of supernovae. It's so exciting to be shaping our knowledge in real time."