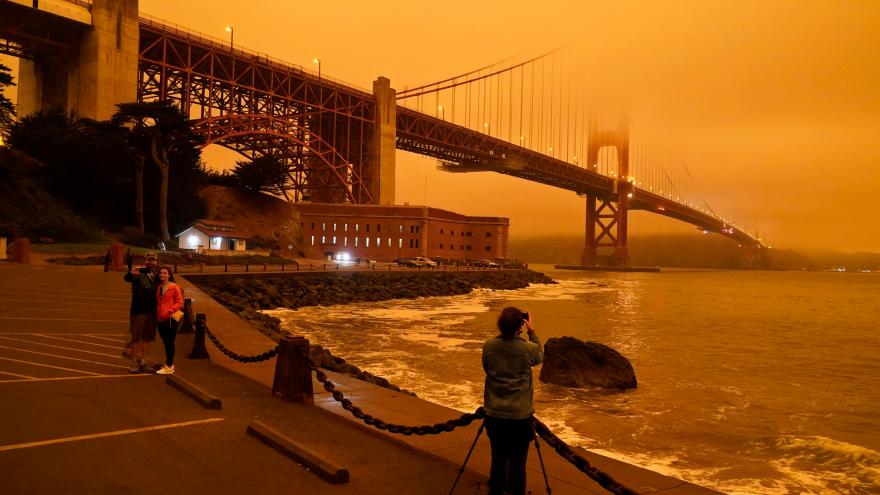 (CNN) -- The Bay Area in California awoke Wednesday to a scene straight out of Mars.

Orange and even red skies blanketed San Francisco, Oakland and Berkeley, and ash rained down, with wildfires raging far in the distance.

"When the smoke and ash get even thicker close to the wildfires, it can cut the sunlight out completely, making it look like the dead of night," CNN meteorologist Judson Jones said.

Residents turned on lights, looking into a rust-colored sky that made it look like nighttime. Winds are carrying the wildfire smoke from afar. Both the Creek Fire and the North Complex Fire are burning more than 200 miles away, yet their presence could be felt in the Bay Area. Other places, such as Salem, Oregon, are experiencing similar apocalyptic glows.

The massive plumes of smoke generated by the wildfires raging across California have led to the longest stretch of unhealthy air quality alerts on record in the Bay Area, with 25 straight days of "Spare the Air" alerts, Erin DeMerritt, Bay Area Air Quality Management District spokeswoman, told CNN. The previous record was 14 consecutive days during the 2018 Camp Fire.

"The smoke and ash are acting like nature's version of an Instagram filter," Jones said. "The particles in the air are refracting sunlight similar to the way small air particles do when the sun sets or rises."

The particles scatter the shorter wavelengths of blue and green, making us unable to see them. The longer wavelengths of red and yellow pass through the bottom, giving us this "haunting" effect, Jones said.

Orange skies covered San Francisco, making Sneha Patil feel like she was on another planet.

"It was surreal," Patil wrote. "It felt like I had woken up to the skies in Mars!"

Michelle McKeown of Oakland saw homes in her neighborhood with lights on at 10 a.m.

"It feels eerie, apocalyptic and frightening," McKeown told CNN. "I've lived in the Bay Area since 1988 and never experienced such doom coming from the sky."

The skies burned red over a vintage clothing store in Oakland. Even though it looked like this, it didn't smell like smoke, said Maya Messoriano, owner of Minds Eye Vintage store.

"At least it's finally looking like a proper #apocalypse," a local band called Empty Vessel posted on Instagram.

Climate scientist Peter Gleick tried to capture the dark skies around his Berkeley home on Wednesday, saying the camera didn't do it justice.

"I've lived in northern California since 1978," Gleick wrote to CNN. "I have NEVER seen skies like this. It's like midnight out there now (at 10:15am) but instead of black skies, they're dark, dark red."

Gleick, the founder of the Pacific Institute, an independent nonpartisan climate and water research center in Oakland, has studied climate science for 35 years.

What he saw outside his window is a sign of climate change, he said.