This officer has saved five lives, including a missing toddler, in rural Michigan 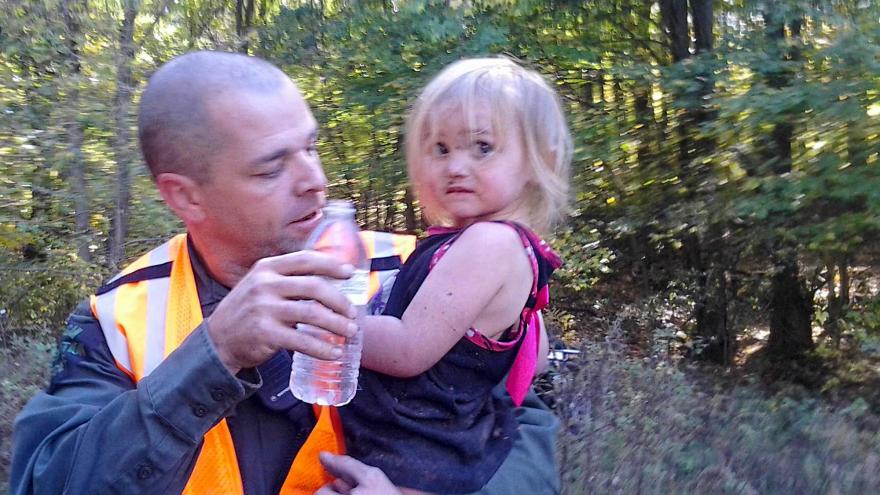 Volunteers searched for 2-year-old Amber Smith on foot, horseback and on off-road vehicles in and around the western Michigan town of Newaygo. As day turned to night and temperatures dropped, many feared the worst.

The next day, a Michigan conservation officer spotted the young girl standing by woods less than 2 miles from her home.

"I took my helmet off and threw it on the ground and walked right over to her, and she reached her arms up for me and I gave her a big hug," Jeff Ginn said. "Finding the girl was pure luck."

It's not the first time Ginn has been at the right place at the right time. During his last 12 years of service, he has been credited with saving five lives while on duty, including Amber Smith.

Ginn rescued a man and his son from the Muskegon River -- flooded by heavy rains -- after strong currents capsized their boat in 2012.

"We got (the father) out of the water, gave him an emergency blanket and we continued upriver for the child," Ginn recalled. "And then we get the kid ... They had a little reunion on the boat. There were some tears. They were pretty emotional."

A year later, he found a suicidal woman in a car and administered first aid until she regained consciousness and an ambulance arrived to take her to the hospital.

And just last year, Ginn responded to a 911 call and quickly administered CPR and a defibrillator to a 75-year-old man suffering a heart attack.

"I checked his pulse, he wasn't breathing, he didn't have a pulse," Ginn said. "I pulled him on the floor, undid his shorts, attached the AED (automatic external defibrillator). I did CPR."

When emergency medical technicians arrived, Ginn said, they hooked the man up to more advanced equipment.

"He was breathing on his own when I left. And I was just like, 'Holy cow, this stuff works!'"

The Michigan Department of Natural Resources has awarded Ginn several times with its lifesaving award for his actions -- most recently this October -- crediting his fast response and training.

Supervisor Lt. Joe Molnar says Ginn even parks his boat at his house "so he can grab it at a moment's notice."

Before his career with the DNR, Ginn worked as a firefighter and state trooper. Today, Ginn -- a father of two -- patrols the busy fishing waters of Muskegon River in Newaygo and the surrounding woods, keeping the area safe for hunters and anglers.

Ginn is still quite humble, despite all the lives he's saved and the recognition he has received.

"My assignment is fantastic," he says. "I love where I work. We have so much to do."