This Ravens superfan died at 14. His face will fill the seats on Sunday 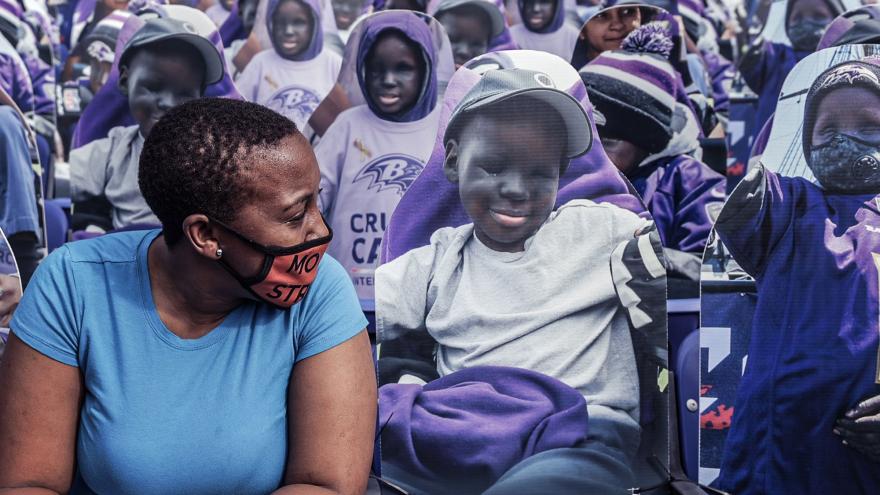 (CNN) -- Walking into the rows of purple seats at the Baltimore Ravens' stadium, a mother saw a sea of repeating cardboard faces.

Sonsy Gaba covered her masked face when she saw hundreds of images of her son, Mo, who was a Ravens superfan. The 14-year-old lost his battle with cancer in July.

Section 146 of M&T Bank Stadium is filled with 575 cutouts of Mo, the Ravens said in a statement. One other special cutout joined him: his mother, who had been by his side throughout it all.

"It's just hard to believe that my son left behind a legacy and just him being himself," Gaba said in a video posted online by the Ravens. "He did nothing out of the ordinary and what he did in 14 years of his life, like, I can't help but be proud of him."

Come Sunday's game against the Cleveland Browns, fans will get to see the section and a specially decorated end zone, with the M and O in Baltimore painted in gold to stand out.

The section was officially dubbed "Mo's Rows," the team said in a statement. The rows of Mo will stay until fans attend and after that the team is looking for a way to represent him when fans return, the team said.

It "serves as a tribute to the young fan who, with his positive outlook and zest for life, captured the hearts of countless Baltimoreans," the team said.

Gaba, who battled cancer four times and was born blind, made headlines last year when he became the first person to announce an NFL draft pick using a draft card written in Braille.

The teen was a regular caller to Baltimore sports radio stations. His big invite to announce the pick came after calling in to sports station 98 Rock in April 2019 to discuss the draft.

Ravens head coach John Harbaugh was on the line and invited Gaba to announce the team's fourth-round draft pick later that week. Harbaugh promised to roll out the red carpet for the superfan.

"What? Really? I've never done that before," the teen said with a big smile on his face. "I would like to do that, yeah."

Gaba is excited for Sunday's game, when Mo gets his name in the end zone for everyone to see.