This "supercluster" of galaxies lets us peek into the universe's past 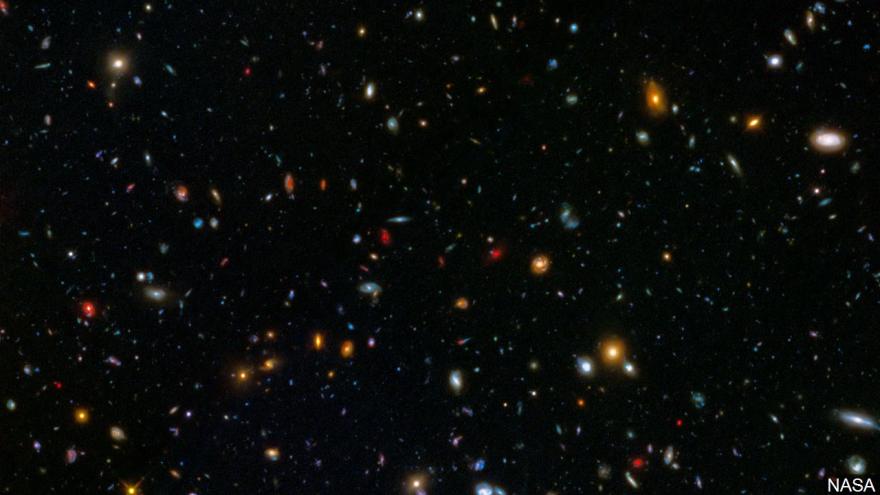 (CNN) -- An international team of astronomers has announced the discovery of an enormous and surprising structure, formed  fairly early in the lifetime of the universe. This structure is a "supercluster" of galaxies, created when many galaxies are bound together by the force of gravity. Conceptually, you can imagine it as looking similar to a swarm of bees, albeit on a cosmic scale, and each bee being replaced with an entire galaxy full of hundreds of billions of stars.

This supercluster is both old and staggeringly large for its age. It is named Hyperion after a titan of Greek mythology, and it comprises roughly the same amount of mass as five thousand galaxies the size of our own Milky Way.

Superclusters are not all that unusual; astronomers know of many of them. What sets the Hyperion apart from others is that it is old. The universe is about 14 billion years old -- just two billion years older than Hyperion, which, in cosmic time, is the blink of an eye.

And that's a peculiarity.

It turns out that these structures are a lot like people -- they start out small and grow over time. When the universe was very young, galaxies were generally much smaller. As time passed, small galaxies collided and coalesced, resulting in bigger galaxies. At the same time, and on much bigger scales, these bigger galaxies were pulled closer to one another through the force of gravity, assembling into clusters and then superclusters.

It's also not at all unusual to find superclusters of galaxies that are closer to Earth than Hyperion. Because we use light to see astronomical objects, and light has a finite speed, the objects closer to Earth are younger -- maybe a few hundred million or a billion years old.

However, the Hyperion supercluster existed about 12 billion years ago. And it's surprising to see such a large assemblage of matter so early in the history of the universe. On a human scale, it's a little like looking at a daycare where you expect to see only toddlers and seeing a 2-year-old who is already the size of an adult.

Apart from its size, Hyperion is an unusual supercluster in terms of the density of its galaxies. It's a little more diffuse than modern superclusters that have relatively compact structure, with small groups of galaxies clustered nearer to one another.

And that's an important point from an astronomical point of view. Remember that we are not seeing Hyperion as it exists now. We're seeing it as it existed 12 billion years ago. If we were able to see it as it exists now, it would presumably look more like more modern superclusters, located closer to Earth. By extension, it's probably true that Hyperion gives us a glimpse of what nearby superclusters looked like in the distant past.

In a very real way, Hyperion helps us understand just how some of the biggest structures in the universe came to be assembled. It's perhaps easiest to think of the galaxies distributed across the universe as looking a little like the foam on a freshly pulled pint of Guinness stout. Look at it from a distance, and it's uniform. But look more closely, and you see the individual bubbles -- little spheres of liquid that are empty in the middle.

The universe is similar, with galaxies spread uniformly on average -- but, if you look more closely, you will see galaxies clustered in what are called walls and filaments, surrounding vast voids in which few galaxies exist. Those filaments are made of superclusters.

So now we have a little insight into the moment in the history of the universe when these filaments and voids began to form -- when large-scale structures began to come into existence.

Anyone who is a parent remembers the time when they watched their child and saw the adult they would eventually become. With the observation of the Hyperion supercluster, we're now doing that for the universe as a whole.