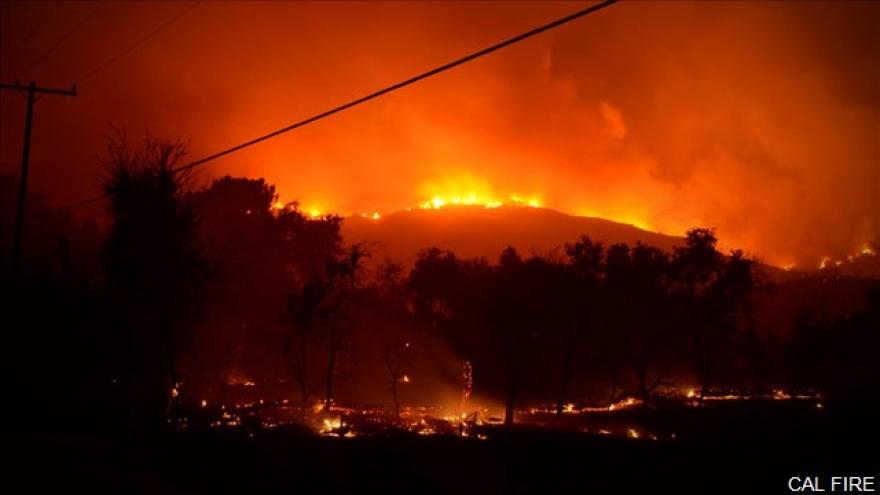 The Thomas Fire, the biggest of a number of blazes in California, is currently the state\'s third largest since reliable records began in 1932, with 270,000 acres burned. The largest, the 2003 Cedar Fire, destroyed 273,246 acres. Photo courtesy CAL Fire 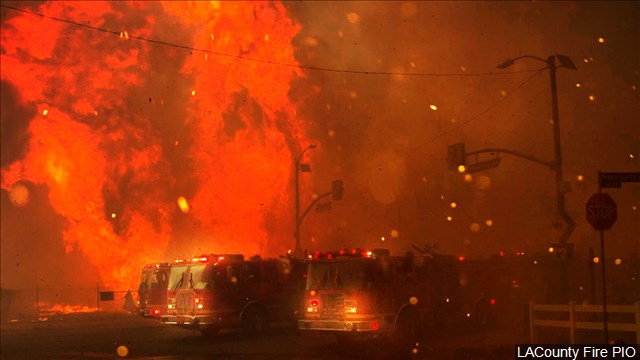 (CNN) -- A wildfire that has devastated swathes of southern California is on course to become the largest wildfire in the state's modern history.

The Thomas Fire, the biggest of a number of blazes in California, is currently the state's third largest since reliable records began in 1932, with 270,000 acres burned. The largest, the 2003 Cedar Fire, destroyed 273,246 acres.

The Thomas Fire also is currently the third-most destructive in structure loss, with over 1,000 buildings burned, according to the Calif 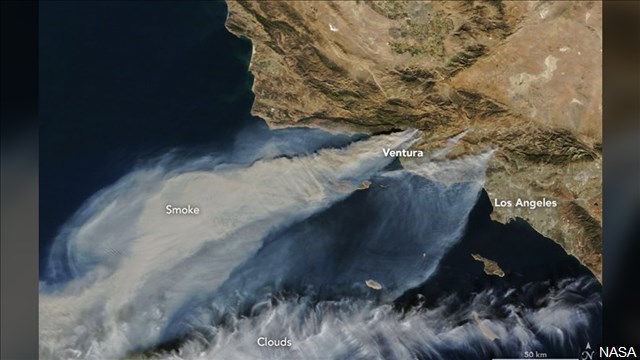 Thick smoke is seen streaming from several fires, including the Creek Fire and the Thomas Wildfire in Ventura County in southern California. NASA
ornia Department of Forestry and Fire Protection, also known as Cal Fire.

The huge blazes, which have burned for two weeks without respite, have affected over 100,000 Californians, many of whom have been forced to flee their homes, either through mandatory or voluntary evacuations -- with no guarantee that they will have anything left when they return.

According to an update released by Cal Fire, 18,000 strictures are still threatened as the Thomas Fire blazes on. As of Sunday night, it was still only 45% contained, the alert states.

While thousands of residents threatened by the blaze remain under evacuation, others have been allowed back in their homes -- or, at least, what was left of them.

The fire is so massive that more than 8,400 firefighters are working around the clock to save lives and contain it. It's bigger in acreage than the area covered by New York City, and has turned neighborhoods to piles of soot and concrete as it churns through the area.

• Improving weather conditions: Winds should die down and stay that way through Tuesday, according to the National Weather Service (NWS) Los Angeles. However, northerly winds are expected to pick back up Wednesday evening, and Santa Ana winds are possible Thursday into the weekend.

• Hefty price tag: About $110 million has been spent fighting the massive blaze, fire officials said. This year has been the costliest for wildfires in US history. Damage has topped $10 billion -- and that was before the current fires began in Southern California.

• Multiple casualties: A total of two people, including one firefighter, have been killed since the fires started.

A funeral procession passing through five counties Sunday carried the remains of firefighter Cory David Iverson, 32, who died in the blaze. The procession began in Ventura and passed through Los Angeles, San Bernadino and Riverside counties before arriving at at a funeral home in San Diego.

Iverson, from Escondido, leaves behind his pregnant wife and 2-year-old daughter, according to CNN affiliate KCAL.

He died of "thermal injuries and smoke inhalation," according to autopsy results from the Ventura County medical examiner's office. An investigation into the death is underway, KCAL reported.

The affiliate reported that first-responders including firefighters, many of whom didn't know Iverson personally, lined the procession route.

Many praised the young firefighter's actions.

"With Cory, they said, he got his guys out first. And he didn't get out. So (he was) the captain of the ship," Bruce Cartelli, retired San Diego Fire Chief, told KCAL.

Displaced resident: '100 ft flames all around us'

Jeannette Frescas told CNN affiliate KEYT that she was awakened by towering flames when the fire reached her neighborhood in Ventura, California.

"I looked out my window and there were flames that were like, a hundred feet, all around us," Frescas said.

Like many residents, Frescas was caught off guard by the fire.

"What was once a paradise was like a war zone," Frescas said of her apartment complex, which was destroyed by the blaze. "It's the scariest thing I've been through in my entire life."

Ventura resident Patricia Rye woke up to her son-in-law pounding on her door. She didn't get a chance to pack any valuables, and fled her home of 17 years in the dead of the night.

"I didn't have time to take anything," Rye told the affiliate. "My wallet, or any of my personal things. I literally left with the clothes on my back."