'Those are wartime injuries': Doctor describes the horrific scene at the Highland Park shooting 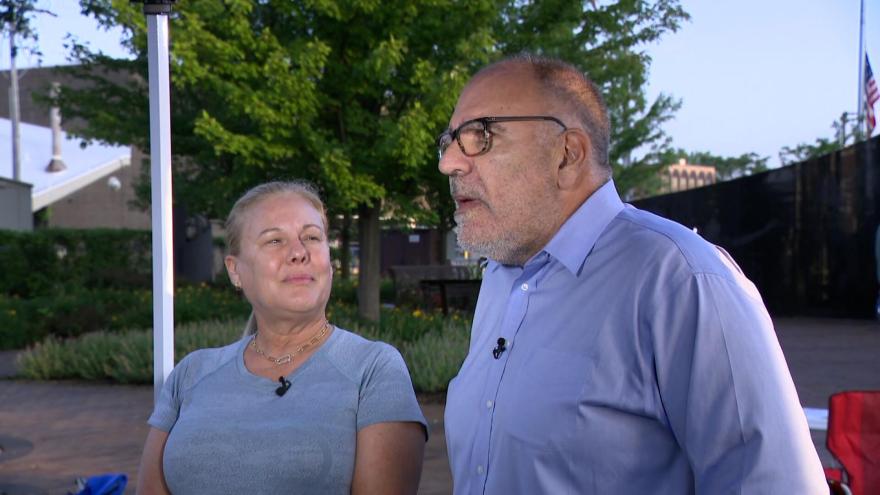 Dr. David Baum, right, describes the horrific scene at the Highland Park shooting as 'Those are wartime injuries'.

(CNN) -- Dr. David Baum waited a minute after the shooting stopped at the northern Illinois Fourth of July parade he attended Monday, and then ran toward the victims. And what he saw, he said, was horrifying.

Some of those who would survive their injuries were on the ground, screaming. But some of the six people killed on the streets in the Chicago suburb of Highland Park appeared to have died instantly, he said.

Baum described what he said were the terrifying results of the power of Monday's gunfire in an interview Tuesday morning.

"The people who were (killed) were blown up by that gunfire ... blown up," Baum told John Berman in Highland Park on CNN's "New Day." "The horrific scene of some of the bodies is unspeakable for the average person."

"There was (a) person who had an unspeakable head injury. Unspeakable," he said.

"I've never served, but those are wartime injuries. Those are what are seen in victims of war, not victims at a parade."

Authorities say a man opened fire from a roof as a parade passed, killing at least six people and wounding about two dozen others. Police said Monday night they had arrested a suspect, Robert E. Crimo III. A high-powered rifle was used, authorities have said.

Baum, an obstetrician in the community, attended Monday morning's parade with his wife and adult children to watch their 2-year-old grandchild walk in the event. The family ran when the shooting happened -- except for Baum, who stayed to see if he could help the injured.

"I waited maybe a minute ... until I knew the shots had stopped. And then you look down, and you saw just people screaming. You saw people on the ground," Baum recalled Tuesday.

A few other doctors also tried to triage the injured, along with a nurse practitioner, and maybe others who helped keep pressure on wounds until paramedics could arrive, he said.

The injured who were alive, "from what I heard, fortunately left the hospital -- they had graze wounds; they had lower extremity injuries," Baum said.

"But the people that died at the scene ... the paramedics walked around and just covered them up quickly, and said 'black.' I guess they have a code for 'dead, cannot try and resuscitate.'"

His wife, Debra Baum, said the magnitude of the shooting was just settling on her Tuesday morning.

"It's just hitting me more, just how sad I am. And I'm also thinking we all have to change our behavior before this (gun violence) gets under control," she told CNN on Tuesday.

"I'm not going to a parade anymore. I'm not going to a sporting event. I'm afraid for my grandson to go to school. So we all have to change our behavior and not do the things we love to do because of this situation."