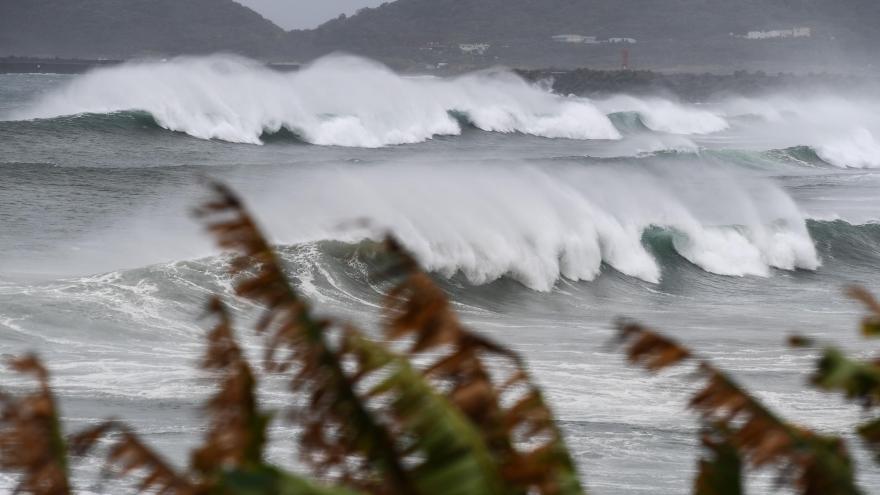 (CNN) -- Hundreds of thousands of people have been evacuated out of the path of a powerful typhoon that's expected to make landfall in southwestern Japan on Sunday.

Typhoon Haishen has sustained winds of 195 kph (121 mph) and gusts of up to 240 kph (149 mph), the equivalent of a Category 3 hurricane in the Atlantic, CNN Weather reported on Sunday.

It's the second powerful storm to hit the region in a week. Typhoon Maysak -- the equivalent to a Category 4 hurricane with winds of at least 130 mph -- followed a similar path to Haishen.

Haishen hit the Ryukyu Islands off Japan's southwestern coast on Sunday, bringing strong winds and heavy rain to the region and knocking out power to thousands of homes.

The storm is currently near Amami-Oshima Island in Kagoshima prefecture and will track north toward the west coast of Kyushu Island from Sunday night through Monday morning local time, according to the Japan Meteorological Agency (JMA). The storm is then expected to continue on its path north and impact the Korean Peninsula in the next 36 hours.

The JMA said Haishen has weakened slightly but is still urging maximum caution for heavy rain, strong wind, high waves and tidal surges. The storm is forecast to bring between 100 to 150 millimeters of rainfall to mainland Japan and the Korea Peninsula, some areas seeing over 200 millimeters of rain.

More than 200,000 households are out of power in Kagoshima and 3,930 households in Okinawa.

More than 500 flights were canceled in southern Kyushu and Okinawa on Sunday, as Haishen affected transportation networks.

It's the second powerful storm to hit the region in a week. Typhoon Maysak -- the equivalent to a Category 4 hurricane with winds of at least 130 mph -- followed a similar path to Haishen.

A cargo ship with 43 crew members and almost 6,000 cows onboard went missing near southern Japan during Typhoon Maysak last Wednesday. Search and rescue efforts were suspended on Saturday due to bad weather, according to Japan's Coast Guard. Three sailors were rescued from the sea, but one of them later died, the Coast Guard said.

According to KCNA, Kim had called on Pyongyang citizens to volunteer for repair efforts in the areas damaged by Typhoon Maysak. The North Korean leader said more than 1,000 homes were destroyed and homes and public facilities in South Hamgyong province were inundated, causing many people to be displaced.

North Korea is now preparing for Typhoon Haishen, according to KNCA, which reported that efforts included educating residents on disaster response guidelines, evacuation sites, and the evacuation path.

The Korea Meteorological Administration forecasts that the typhoon will not hit the Korean Peninsula directly as first thought, but will travel along the east coast.

The agency had issued a preliminary typhoon warning for all South Korean provinces as well as a heavy rain warning for northern Gangwon Province.