California wildfires have burned an area almost the size of Connecticut 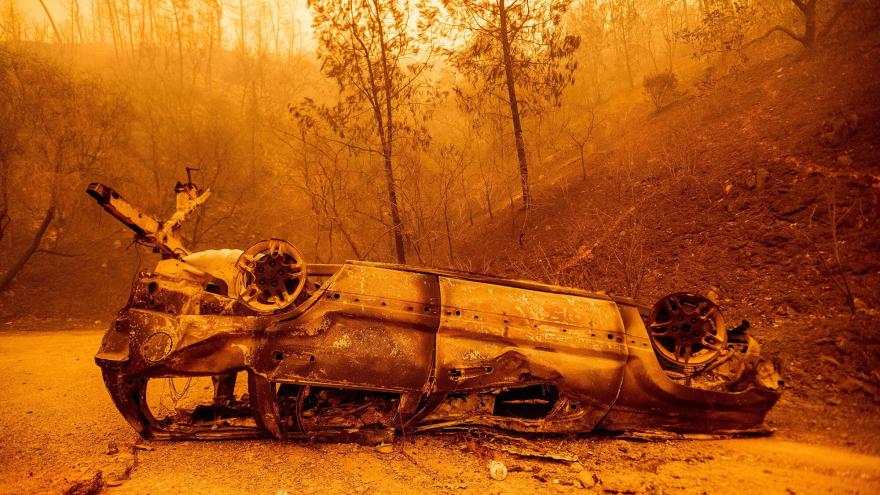 The charred remains of a vehicle are left on the side of a road during the Bear Fire, part of the North Lightning Complex.

(CNN) -- Since the start of 2020, wildfires in California have burned over 3.2 million acres of land -- an area almost the size of Connecticut.

CalFire said Monday that nearly 16,500 firefighters have been battling 28 major wildfires in the state, which have left 24 people dead and over 4,200 structures destroyed. For those who have avoided the flames, smoke from the fires has choked the air and kept people inside. The continued risk of future fires has forced partial power shutoffs for thousands of California residents.

"These are intense, huge blazes," said Tom Steyer, the billionaire environmentalist and former Democratic presidential candidate. "This is a huge, immediate, urgent problem."

Both Gov. Gavin Newsom and Los Angeles Mayor Eric Garcetti have attributed the severity of this season's fires to climate change, pushing back on President Donald Trump's assertion that the fires were due to poor land management.

"Denial doesn't work when it comes to climate," Garcetti told CNN's Anderson Cooper. "The cost of denial is that people lose their lives and their livelihoods."

Garcetti said it's disappointing to see the President portray the state's devastating wildfires as a partisan issue and blaming the state as it suffers from a natural disaster.

"Our federal agencies do step up and do help us and do know that we need their assistance but instead, the leader at the very top continues based on the electoral map to either, you know, put down California for not raking enough," Garcetti said. "He doesn't say anything like that in a swing state. In the Gulf Coast, he doesn't assign the blame for the hurricanes or anything that they have done."

Record-breaking temperatures and a lack of rain have only exacerbated conditions.

Trump visited McClellan Park, outside of Sacramento in Northern California, on Monday for a briefing with local and federal fire and emergency officials on the wildfires.

Just before his briefing, Trump was asked by a reporter what role climate change was playing in the fires.

"Well, I think this is more of a management situation. If you look at other countries, if you go to other countries in Europe, Austria, Finland ... they're forest nations. They're in forests and they don't have problems like this," the President responded.

At least 35 people have died in the West Coast wildfires, including 24 in California, 10 in Oregon and a child in Washington state.

The deadliest blaze has been the North Complex Fire, accounting for more than half of the victims in California.

On Sunday, CalFire Butte County officials announced two additional deaths in the blaze for a total of 14 fatalities.

The North Complex Fire has burned 264,000 acres in Plumas and Butte counties.

It is 39% contained after entering Butte County "with a vengeance," a little less than a week ago, according to CalFire. The blaze was "driven by extreme winds, heavy dry fuels and steep terrain," CalFire said.

"Resources in the most active areas of the fire made great progress today building containment lines," the agency said in an incident update Monday.

Weather conditions are not expected to improve any time soon as high winds of up to 40 mph are forecast in the coming days in parts of California.

Fire weather watches have been issued throughout the region and, while rain may hit the coastlines of Oregon and Washington where wildfires continue to rage, California is forecast to remain dry.

Twelve locations have been shut down in both California and Oregon, and one location in Washington.

Several fires continue to burn throughout the Pacific Northwest, killing 10 people in Oregon and one in Washington.

A child died in the Cold Springs Fire near Omak, Washington, officials said.

"My heart breaks for the family of the child who perished in the Cold Springs fire," Washington Commissioner of Public Lands Hilary Franz said in a statement on her social media accounts Friday. "I am devastated. The DNR family is devastated. The pain that family is going through is unfathomable."

Franz said she had been touring communities devastated by fires but had hoped no deaths had happened.

"Many homes and buildings were lost throughout the state, but the relief I felt in this tragedy is that we hadn't lost any lives. That tragically and horrifically changed today" the commissioner said.