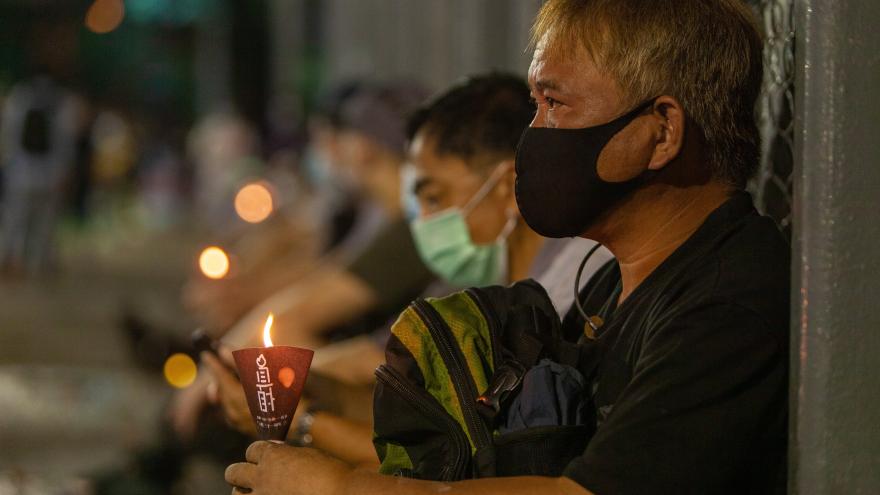 (CNN) -- Thousands of Hong Kongers defied a police ban Thursday to gather in the city's Victoria Park and mark the 31st anniversary of the Tiananmen Square massacre.

The rally, which has been held every year since the 1989 crackdown on pro-democracy protesters in China, had been banned over coronavirus fears, a move many viewed as political in a city where infections are down to a handful per month.

Early Thursday evening however, hundreds and then thousands of people defied the order, as well as signs and fences around Victoria Park, to occupy two large football pitches where the rally has been traditionally held. While numbers appeared down on previous years, and the usually well-organized memorial had a rather chaotic impromptu feel, they were by no means negligible, a major sign of defiance to Beijing.

Lee Cheuk-yan, an organizer and former lawmaker, led the crowd in chants of "end one-party rule," and "democracy for China!"

Others chanted slogans from last year's anti-government protests, including "fight for freedom, stand with Hong Kong," and a more recent refrain, "Hong Kong independence, the only way out."

Those slogans could be illegal in the near future, as Beijing moves to impose a national security law banning sedition, secession and separatism. Similar laws have been used to crack down on dissidents and pro-democracy activists in China.

That impending law is currently being drafted in Beijing and will be imposed automatically in Hong Kong via a rarely used constitutional backdoor, bypassing the city's legislature. The law hung over this year's Tiananmen memorial even before the event was officially banned, as both opposition and pro-government figures have predicted similar rallies could be illegal in future.

Hong Kong has long been the only place on Chinese soil where a mass commemoration of the June 4 crackdown is held. This fact has been a litmus test of sorts for the city's autonomy from China, which has shrunk considerably in recent years, culminating in the national security law, which Beijing has said is necessary to prevent the type of violent unrest seen last year.

That unrest had been resuming as Hong Kong came out of the coronavirus crisis, and social distancing regulations relaxed. But police had responded to earlier protests with overwhelming numbers, and used tear gas and pepper spray to disperse several gatherings in recent weeks.

Thursday saw a complete reversal in tactics, as police stayed largely out of sight as several thousand people ignored fences and signs to gather illegally in Victoria Park. It was a striking contrast, perhaps a deliberate one, with protests in the US, which Hong Kong leader Carrie Lam on Tuesday pointed at to accuse critics of hers in Washington of "double standards."

Crowds began dispersing soon after 8 p.m. local time, following the lighting of candles and a moment of silence to remember the hundreds, possibly thousands, who were killed in the Tiananmen crackdown.

At its peak, the crowd spilled across two football pitches, and while there were considerably more gaps than in previous years, it was a major display of defiance in a city that has seemed somewhat shell-shocked in recent weeks by news of the national security law.

The next major test, of both the pro-democracy movement and the authorities, will come as early as next week, which sees two key anniversaries of last year's protest movement.

About 1 million people marched against an extradition bill with China on June 9, 2019, while three days later, protesters blockaded the city's legislature and clashed with police to prevent the law being passed. It was eventually withdrawn in September 2019, by which point the anti-government movement had grown substantially, with its goals expanded beyond a single bill.

One of the major concerns expressed by Beijing over last year's protests -- as well as the violence -- was the growing clamor among many young activists for Hong Kong independence.

Separatism has traditionally been a fringe movement in Hong Kong. However it has grown in popularity in recent years, as space for regular pro-democracy activism shrank amid increasing pressure from Beijing.

Many of those who engaged in violent unrest last year self-identified as pro-independence, and flags calling for the city to split from China were a common sight at protests over the summer.

Yet they were never common sights at previous June 4 memorials. The Tiananmen vigil had actually been something of a wedge issue within the opposition movement, with many independence supporters seeing the massacre as irrelevant to the city and resenting the Hong Kong Alliance -- which organizes the annual rally -- for its strong commitment to a democratic China, which implicitly contains Hong Kong within it.

The upcoming security law -- which will likely be used to target independence activists -- and the pressure on the rally appears to have pushed these rival parts of the opposition together, with even the moderate, older crowd at Thursday's rally joining in with chants of "Hong Kong independence, the only way out."

NBA may return July 31 with 22 teams with modified format

US to block Chinese airlines from flying into the US

Today 76° Windy with a few clouds