Thousands show up for black trans people in nationwide protests 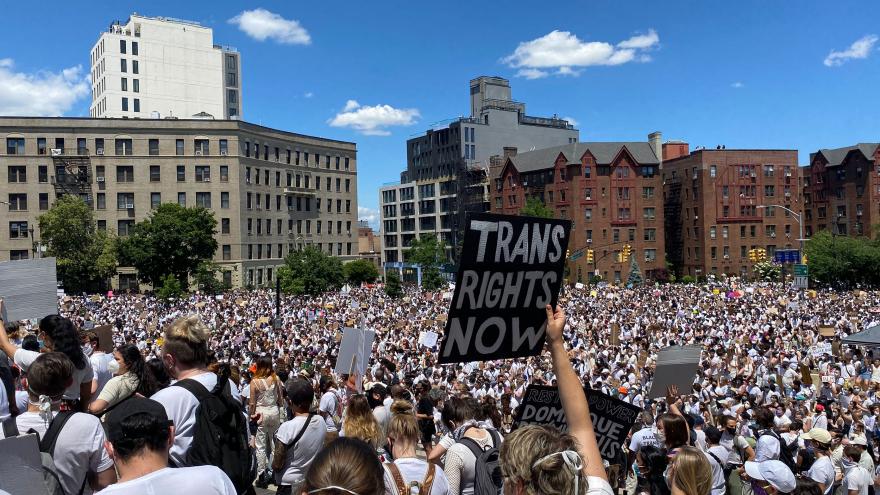 (CNN) -- Black transgender activist Raquel Willis stood on the deck of the Brooklyn Museum on Sunday and led thousands of protesters in a chant.

Sunday's protest also took place amid global demonstrations in support of the Black Lives Matter movement, which has surged in the wake of George Floyd's death.

It also followed the Trump administration's announcement that it is eliminating an Obama-era regulation prohibiting discrimination in health care against patients who are transgender.

Led by and centered around black trans women, Sunday's march and rally in New York gave trans and gender non-conforming people the opportunity to mourn lives lost, and to vocalize their demand for justice and fair treatment.

"We can't just talk about trans people when they're dying," Eliel Cruz, one of the co-organizers of the event and director of communications at NYC Anti-Violence Project, told CNN. "But what are we doing actively and intentionally to create space for them to be safe and well?"

Protesters wore white as a nod to black history

Protesters wore white and were asked to march silently for the first portion of Sunday's march.

Rally co-organizer Fran Tirado explained this decision was made as a nod to black history. In 1917, nearly 10,000 demonstrators in New York City wore white as they participated in the NAACP's Silent Protest Parade, one of the first public demonstrations of civil rights by black Americans.

"We felt that was a really powerful way to think about our action in relation to a lot of others and how thinking on the metaphor of like silence equals death and how everything comes together," Tirado, a queer writer and producer, told CNN.

The role of organizer in times of civil unrest has most often been filled by the same black and brown people who themselves are facing violence and mistreatment, Tirado said.

It was important to Sunday's organizers -- a group made up primarily of queer people of color, both black and non-black -- that the legwork of organizing be done by non-trans folks, while keeping the spotlight on the partnering trans activists and organizations.

"This collective of folks is particularly powerful because it's modeling what is possible when you do have allies and folks who do care and also want to make sure that they're building something that speaks to the hearts of the actual people that they're representing," Willis told CNN in an interview. "So often that doesn't happen."

Melania Brown, the sister of Layleen Polanco, was among the speakers at the New York rally on Sunday. Polanco, an AfroLatinx transgender woman, died in June of 2019 while being held in solitary confinement following an epileptic seizure at Riker's Island.

"Black trans lives matter," Brown told the crowd. "My sister's life mattered. All of the loved ones we have lost, all of these beautiful girls that we have lost. There lives matter. We have to protect them."

While Sunday's protest came in response to the murders of Fells and Milton, organizers emphasized the necessity to fight for trans lives beyond seeking post-mortem justice.

Like Fells and Milton, the majority of trans people killed are black women. Ninety-one percent of the reported murders of trans and gender non-conforming people in 2019 were black women, and 81% were under the age of 30, according to the Human Rights Campaign, which tracks reported killings.

Violence against the transgender community often goes unreported or misreported, as a result of authorities, media reports, and family members misidentifying the dead, the Human Rights Campaign said.

Deadnaming is the term used to refer to the use of a trans person's birth name in place of their chosen name, as has been the case for Riah Milton, who was deadnamed and misgendered by the Butler County Sheriff's Office in a press conference last Thursday. CNN has reached out to the sheriff's office, which is handling the case, for request for comment.

All of the partners in Sunday's protest are trans-based support organizations that provide both immediate and longterm assistance to trans people, organizers said.

New York City wasn't the only place where trans activists and allies mobilized.

In Los Angeles on Sunday, an estimated 25,000 people marched through Hollywood during an All Black Lives Matter protest, CNN affiliate KTLA reported. The march was meant to honor Tony McDade, a black transgender man who was shot by a Tallahassee police officer last week.

"The protest is in direct response to racial injustice, systemic racism, and all forms of oppression," the Black LGBTQIA Advisory Board Council, which organized the protest, said on its website.

A group of people in Chicago organized a Drag March for Change this weekend. They demanded justice for victims of police brutality, as well as a reclassification of violence against transgender individuals as hate crimes, CNN affiliate WLS reported.

In Boston, thousands chanted "no justice, no peace, no anti-trans violence on our streets" as they marched from Franklin Park to Nubian Square, CNN affiliate WCVB reported.

"We know that black people are vulnerable -- especially vulnerable in this society -- and especially trans folks and trans black folks," protester Khery Petersen-Smith told WCVB. "So I think it's important we all show up and build solidarity."