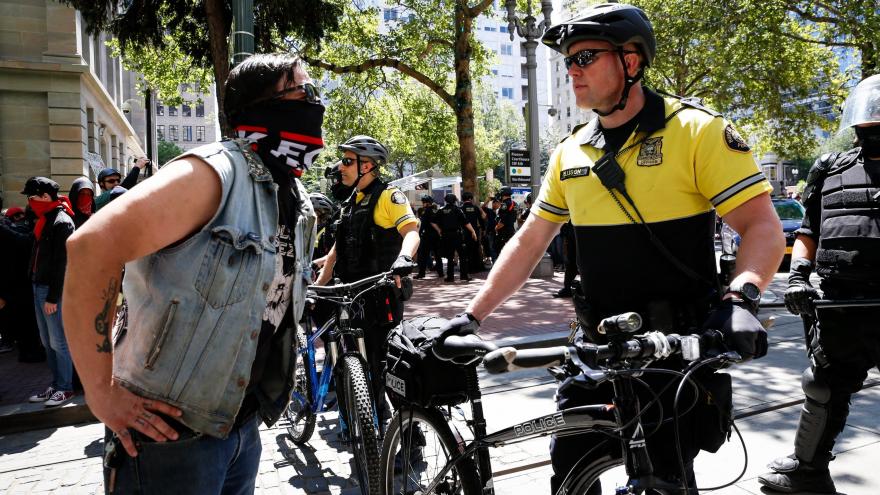 (CNN) -- Three people were arrested and eight people injured, including at least three police officers, during violent demonstrations in Portland on Saturday, according to police.

Multiple assaults were reported, police said, and items were thrown at demonstrators and officers that looked like milkshakes but contained quick-dry concrete.

Two officers were pepper sprayed, an officer was punched in the arm by a demonstrator, and an officer sustained a head injury from a projectile, police said. The injuries were not life-threatening.

According to CNN Portland affiliates KOIN and KATU, clashing demonstrators included anti-fascist protesters and members of several right-wing groups, including the far-right group the Proud Boys.

A website for the Rose City Antifa group earlier this month called on supporters to "defend" the city against the Proud Boys.

A group of Antifa protesters marched to Pioneer Courthouse Square, where a smaller group of right-wing demonstrators had gathered, KOIN said.

KOIN reported that the animosity between the groups was mostly verbal. But eventually police called it a civil disturbance and ordered people to leave.

It's unclear which groups the arrested protesters were affiliated with.

"Demonstration events are very fluid in nature and the management of these events is complex," said Assistant Police Chief Chris Davis. "Unfortunately, today some community members and officers were injured. We are actively investigating these incidents to hold those responsible accountable."