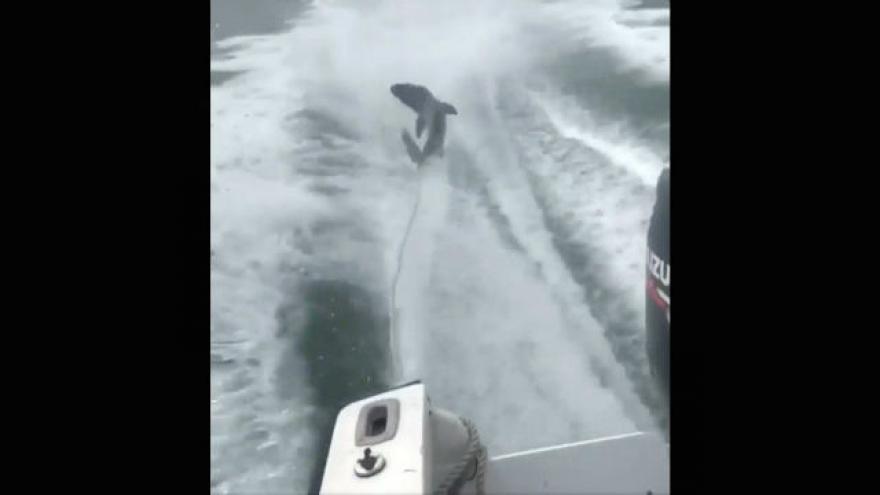 Three Florida men seen in a viral video laughing and smiling as a shark gets dragged behind a high-speed boat have been charged with animal cruelty. Photo courtesy Florida Fish and Wildlife Conservation Commission

(CNN) -- Three Florida men seen in a viral video laughing and smiling as a shark gets dragged behind a high-speed boat have been charged with animal cruelty.

Michael Wenzel, 25; Robert Lee Benac, 28; and Spencer Heintz, 23, were all charged with two felony counts of aggravated animal cruelty, according to the Florida Fish and Wildlife Conservation Commission and the Hillsborough County State Attorney's Office. Wenzel and Benac were also charged with one count each of illegal method of take, a misdemeanor.

Florida wildlife officials began investigating after the video surfaced on social media in July. It showed a shark being dragged behind a high-speed boat.

Three men in the video, excluding the individual who shot the footage, are seen laughing and smiling as the animal visibly struggles in the boat's wake. One of the men says the shark looks "almost dead."

Florida wildlife investigators found that the men first shot the shark, then dragged it at high speed, causing its death.

Klepper said a third-degree felony animal cruelty charge carries a sentence of up to five years in prison and a fine of up to $10,000.

While searching social media for evidence, investigators discovered a second incident earlier that day, resulting in an additional misdemeanor charge against two of the men, he said.

"An issue like this is very unusual. This was a disturbing and disheartening video," Klepper told CNN.

Lots of views, and outrage

Miami charter fisherman Mark Quartiano, who goes by "Mark the Shark," posted the video on social media after two Instagram users sent it to him who he said were part of the incident. Quartiano said he decided to publish the video so the fishermen could be identified and caught.

"I was horrified," Quartiano told CNN. "I've been shark fishing for 50 years, and I've never seen a disrespect for an animal my entire career that was that evil."

The video racked up thousands of views on social media as well as thousands of comments, many of them expressing outrage.