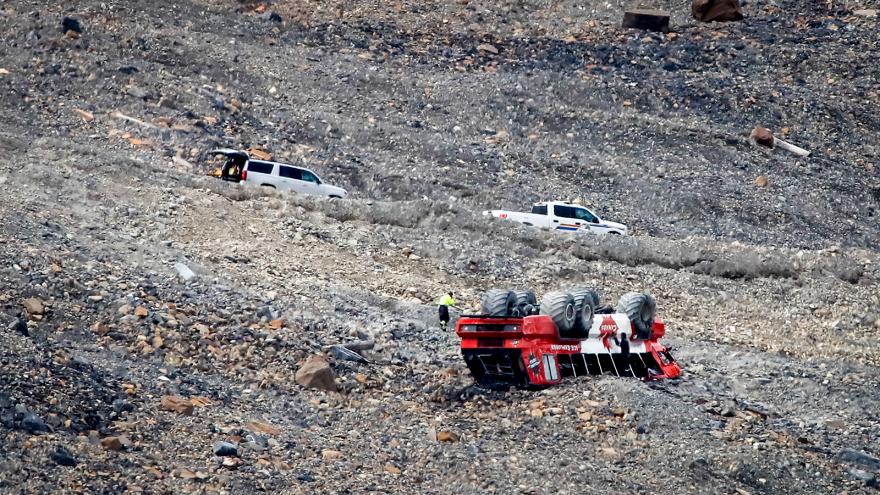 (CNN) -- Three people have died in an off-road tour bus accident in the Canadian Rockies, according to the company running the tour.

Dave McKenna, president of the Banff Jasper Collection by Pursuit, told CNN an off-road ice explorer was involved in an accident en route to the Athabasca Glacier on Saturday around 2 p.m. MT (4 p.m. ET).

The Athabasca Glacier is on the Columbia Icefield, in the Canadian Rockies, about three and a half hours northwest of Calgary.

"I would like to extend our deepest condolences to the family and friends of the deceased as well as extend our utmost sympathy to those who were injured in yesterday's accident," McKenna said in an emailed statement.

Sgt. Rick Bidaisee of the Royal Canadian Mounted Police told media at the Icefield on Sunday that emergency responders had found three adults dead at the scene.

"There were 27 occupants in the vehicle and three adults were confirmed deceased on arrival on scene with multiple people injured. STARS air ambulance and ground ambulances transported the injured to hospitals in the area and in Edmonton and Calgary," Bidaisee said.

"Efforts are currently underway to remove the vehicle from the scene and complete a mechanical inspection. At this time, we are unable to confirm the cause of the rollover," he said.

Bidaisee said the location of the crash was remote, with the bus lying some 50 to 100 yards from the road, and it could take some time to remove it.

Stuart Back, vice president of operations for Pursuit's Banff Jasper Collection, said the company had paused its operations in the Columbia Icefield as a result of the incident.

Alberta Health Services said on Twitter Saturday that multiple patients were injured after the bus rolled over in Alberta.

It said 24 patients had been taken to hospital, 14 in critical condition. Air ambulances and helicopters also responded to the accident.

"To those who lost a loved one in yesterday's bus crash at the Columbia Icefields, know that we are here for you and are keeping you in our thoughts. We also wish a full recovery to those who were injured. And to the first responders, thank you for your quick action and hard work," Trudeau said.