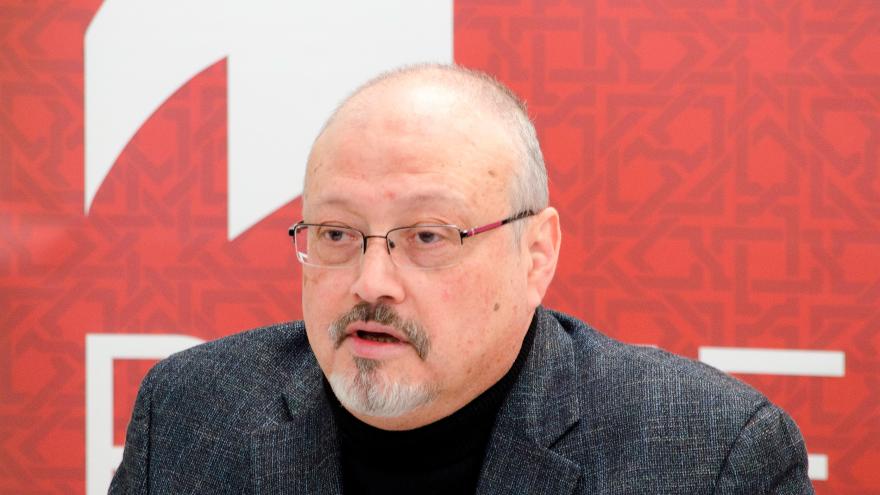 File photo dated March 2018 of Saudi journalist Jamal Khashoggi, killed in Istanbul on October 2, 2018. Shortly after the US intelligence community published its report on Friday on Feb 26 on the Saudis who were responsible for the death of Jamal Khashoggi, it was taken down without explanation and replaced with another version that removed the names of three men it had initially said were complicit. - Balkis Press/Abaca/Sipa USA/AP

(CNN) -- Shortly after the US intelligence community published its long-awaited report on Friday afternoon on the Saudis who were responsible for the death of Jamal Khashoggi, it was taken down without explanation and replaced with another version that removed the names of three men it had initially said were complicit.

The quiet switch by the Office of the Director of National Intelligence went largely unnoticed as the outcry grew that the Biden administration was failing to punish the prince in any way, despite having just declared in no uncertain terms that MBS was responsible.

The first link to the report that was sent out by ODNI went dead. It was then replaced with a second version that removed three of the men it had just announced "participated in, ordered, or were otherwise complicit in or responsible for the death of Jamal Khashoggi."

The Office of the Director of National Intelligence declined to clarify why the names were originally on the list and what roles, if any, they may have had in Khashoggi's killing.

"We put a revised document on the website because the original one erroneously contained three names which should not have been included," an ODNI spokesperson told CNN.

A senior administration official had argued on Friday afternoon before the change was noticed that the report contained no new information.

"This [is] information that has been known to the U.S. government and briefed to select committees and members of Congress over one year ago," the official said.

Yet three of the names that ODNI had first listed had not previously been mentioned in reports about Khashoggi's death.

The White House didn't respond to a request for comment Sunday about the discrepancy in the reports.

Biden had said during the presidential campaign he would make Saudi Arabia "the pariah that they are."

"Historically, and even in recent history-- democratic and republican administrations-- there have not been sanctions put in place for the leaders of foreign governments s where we have diplomatic relations and even where we don't have diplomatic relations," White House press secretary Jen Psaki told CNN on Sunday. "We believe there is more effective ways to make sure this doesn't happen again."

The first of the three names removed is Abdulla Mohammed Alhoeriny, who has not been previously connected with Khashoggi's death.

According to a person familiar with the inner workings of Saudi intelligence, he's the brother of General Abdulaziz bin Mohammed al-Howraini, a minister who is in charge of the powerful Presidency of State Security which oversees multiple intelligence and counterterrorism agencies. Abdulla (as it's spelled by ODNI) appears in Saudi reports as the assistant chief of state security for counterterrorism.

The two other names that appeared in the unclassified intelligence report and then disappeared are Yasir Khalid Alsalem and Ibrahim al-Salim. It was not immediately clear who they are.

The three men are not among the 18 who have been sanctioned by the US for Khashoggi's murder. Those 18 were listed in the revised intelligence report, whose file name on the ODNI website includes "v2," clearly indicating it's the second version.

The initial intelligence report appears to have been online for several hours before ODNI took it down, according to the Wayback Machine internet archive. The discrepancy between the two lists of names was noticed on Capitol Hill and clarification has been asked of ODNI, a House Intelligence Committee official said. A spokesperson for the Senate Intelligence Committee declined to comment.

The report, which was declassified by Director of National Intelligence Avril Haines, assessed that the Crown Prince, known as MBS, approved the operation in Istanbul to "capture or kill" Khashoggi.

The report concludes with a list of names -- first 21, then 18 when it was revised -- who US intelligence has "high confidence" were involved in the grisly murder but does not assess whether they knew that the operation would lead to his death.

Seventeen Saudis had already been sanctioned for the murder by the US Treasury Department. An eighteenth, a former senior intelligence official, was added Friday. The force that serves as the protective detail for MBS, known as the "Tiger Squad," was also sanctioned.

The State Department also announced 76 unnamed Saudis would be barred from the United States under a "Khashoggi Ban."

The Saudi government immediately responded to Friday's report and criticized its conclusions.

"The Kingdom of Saudi Arabia completely rejects the negative, false and unacceptable assessment in the report pertaining to the Kingdom's leadership, and notes that the report contained inaccurate information and conclusions," a statement read.

Biden said over the weekend that more announcements regarding Saudi Arabi would be coming Monday. The White House clarified his comments, saying the State Department would provide more details about the announcements already made.

"The recalibration of relations with Saudi Arabia began on January 20th and it's ongoing. The Administration took a wide range of new actions on Friday," a White House official said. "The President is referring to the fact that on Monday, the State Department will provide more details and elaborate on those announcements, not new announcements."