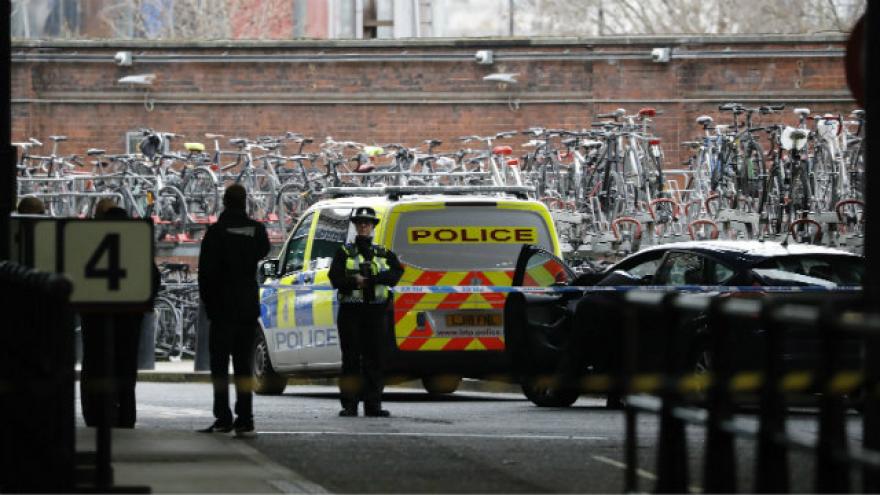 (CNN) -- Three improvised explosive devices were found near major London transport hubs on Tuesday, in what police are treating as linked incidents.

The Metropolitan Police's counter-terrorism command unit has launched an investigation into the devices, which were sent in small packages to buildings at or near Heathrow Airport, London City Airport and Waterloo train station.

All the devices were judged to be viable, and in one instance, the package burst into flames when staff opened it. No one was hurt.

The Irish police are also assisting with the investigation, a spokesperson for An Garda Siochana, Ireland's national police force, told CNN. British and Irish news outlets reported that at least two of the packages had Irish stamps.

The Metropolitan Police said that the incidents appeared to be part of a "linked series." Officers were keeping an "open mind" about motive, police said.

Sadiq Khan, the Mayor of London, paid tribute to police for their response. "Counter Terrorism Command has launched an investigation after three suspicious packages were found at locations around London today -- thankfully there have been no injuries," Khan said in a statement. "I would like to thank first responders for their swift actions to keep Londoners safe."

The first device was found in a package delivered to a building near Heathrow, the UK's busiest airport, at about 9:55 a.m. local time Tuesday. Staff opened the package, causing it to "initiate," police said. Part of the package burned.

At about 11:40 a.m., police were called to the post room at Waterloo station, a major hub for trains to the south and west of London. The package was not opened and specialist officers made the device safe, police said.

The third package turned up about 30 minutes later at City Aviation House, a building near London City Airport, a small commercial airfield in the Docklands area of east London. Again, the device was not opened and specialist officers made it safe, police said.

Transport is running normally following a brief suspension of trains to City Airport. Police have told London's transport hubs to be on alert for other suspicious packages.