'Tidal wave' of floodwaters overtook Tennesseeans in minutes and killed 21, including 7-month-old twins 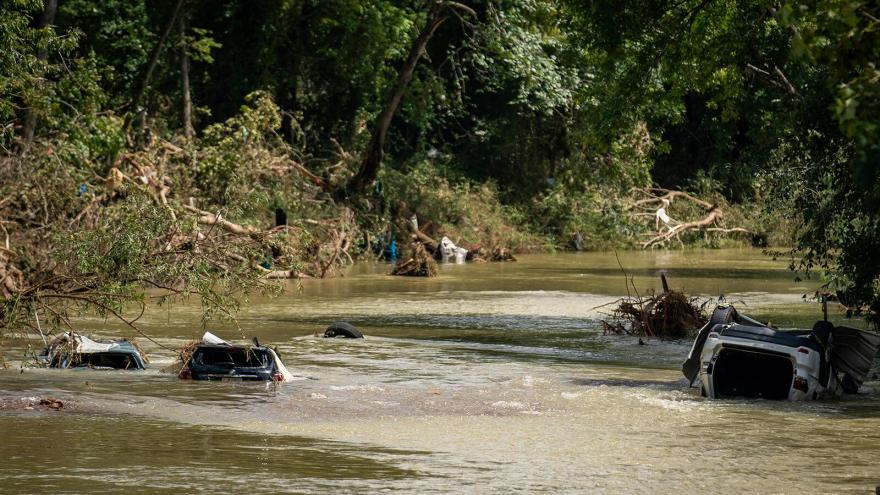 Vehicles are submerged in Trace Creek as a result of severe weather in Waverly.

(CNN) -- Heavy rain already had filled the yard, and Casey Hipshire expected her Middle Tennessee home to flood, she said. But the speed of the rising water caught her off guard.

"All of a sudden it was like a tidal wave that just came over the road and into my yard," she told CNN.

Hipshire rushed to pack a bag and save herself, her 8-year-old son and her husband.

"Next thing I know the water is in my house, and it's up to my chest," she said.

"And my house fell off the foundation while we were still in it, so we had to break the window in the kitchen and crawl out of it and get up on the roof as fast as we could."

Rain inundated the region west of Nashville, sweeping away people, homes and vehicles as residents tried to escape. The flooding damaged infrastructure, schools, homes and other facilities in Waverly, Waverly Police and Fire Chief Grant Gillespie said during a Sunday afternoon news conference.

The number of people missing continues to fluctuate as names get added to the list while others are reported safe, Collier said. The resumption of cell phone service has helped whittle the list of missing from 45, Gillespie said.

"We need patience and prayers," Humphreys County Sheriff Chris Davis said, adding people should stay out of the area as they continue their operations. Local officials are trying to craft a long-term plan, he said, but "we're getting overwhelmed."

The body of Davis' own best friend had been recovered, the sheriff revealed in a news conference.

"He drowned in this, and sitting here thinking about that, yeah, it's tough but we're going to move forward," Davis said.

Rescue and recovery efforts "will go on until we account for all missing Tennesseans," state emergency management agency Director Patrick Sheehan said.

"It's pretty devastating on the ground," Sheehan explained, adding, "We're going to see mostly recovery efforts at this point rather than rescue efforts."

Also among the dead is a foreman who worked on Loretta Lynn's ranch in Humphreys County, a Facebook statement from the country music legend said Sunday. Wayne Spears was the longtime foreman her property, the statement said.

"There are no words at the ranch today ... only tears. Our ranch family is our family," Lynn said in her Facebook post. "He took such good care of things here on the ranch for us. He's one of us and the whole Lynn family Is heartbroken. Please pray for his precious family and friends."

The Tennessee Health Department confirmed 16 deaths so far, Sheehan said, noting that the discrepancy with the toll reported by local authorities owes to the health department's strict process for validating deaths.

Rainfall may have set a Tennessee record

The rainfall total in McEwen may become a state record when it's made official, said Krissy Hurley, warning coordination meteorologist for Nashville weather service office. Centerville is not a verifiable weather station in terms of official records, the office told CNN.

"We were getting rainfall rates of 3 inches per hour for three hours straight," Hurley said. "It's an unheard-of, astronomical type of statistic to see after the fact."

The flooding on Saturday was caused by several storms training over the same area.

"We had a stationary boundary set up over western part of Middle Tennessee that provided the perfect set-up conditions, a constant training of (storms) over that one area for several hours right along that boundary," meteorologist Mark Rose from the Nashville weather service office told CNN.

"The rainfall forecast for this upcoming seven days shows almost nothing" for the area that flooded over the weekend, Rose said. "It's going to be a relatively dry week ahead."

The large amount of rain that fell -- a record 14 inches, according to the governor -- created "devastating flooding in the community" and a "tremendous loss of life," Lee said.

Lee spoke with survivors of the flooding and was shocked to hear how quickly their situation became dire, he said.

"They would see water in their yard and then within minutes it was coming into their home," Lee said, adding residents went from "seeing floodwaters rise to not being able to escape their homes."

Lee described the aftermath as tragic: "Homes washed off their foundations, cars strewn about the community. It is a devastating picture of loss and heartache," he said.

First responders, including the National Guard, will remain on the scene as search and rescue operations continue, the governor said.

"What we do know is that it's incredibly difficult, and our hearts and our prayers need to be for these communities, for those folks in that community, many of them who have suffered not only the loss of their homes and their property but the loss of family members and friends," Lee said.

Sheriff describes pain of being unable to help everyone

As emergency responders tried Saturday night to get into the flood zone, their effort was complicated by downed phone lines and washed-out roads, said Davis, the Humphreys County sheriff.

He likened it to the feeling of a mother not being able to reach her child.

"Knowing that you have people that stayed that can't get help ... I have people floating down the creek that nobody can get to, and nobody can help. It hurts. It hurts," he said, holding back tears.

Waverly Mayor Buddy Frazier said the loss of life is unlike anything the town has ever experienced.

"I've been around a long time, and I've been through a lot of events here and this one really took me back," Frazier said. "This is bad, this is bad: the number of people it affected the number of lives lost."