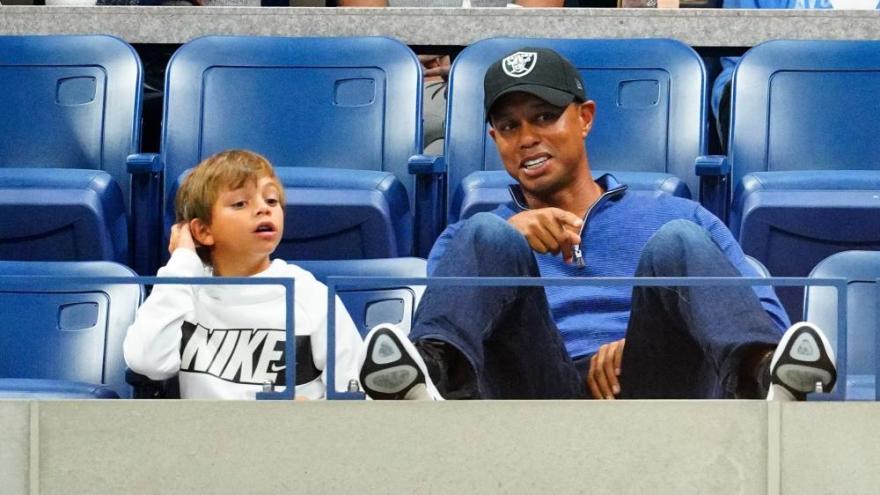 Charlie bested all the boys competing in the age 11 category, shooting three under 33 across nine holes while finishing with three birdies. He is seen here with his father Tiger Woods.

(CNN) -- Tiger Woods' 11-year-old son Charlie is a chip off the old block when it comes to golf.

Woods' son participated in a US Kids Golf-sanctioned event at Hammock Creek Golf Club in Palm City, Florida over the weekend -- and he dominated the competition.

Charlie bested all the boys competing in the age 11 category, shooting three under 33 across nine holes while finishing with three birdies. He beat the second place finisher by 5 strokes.

Woods, 44, was in attendance, and he could be seen in photos shared on social media acting as Charlie's caddy for portions of the event, carrying his bag of clubs between rounds.

This isn't the first time Woods Sr. has been seen pictured caddying for his son. In January, video surfaced of Charlie hitting balls on a practice range ahead of a junior tournament in Florida, with his dad standing behind him. The video, taken from a distance, set social media abuzz.

Last month, Woods told GolfTV that it's "an absolute blast to go out there and just, you know, be with him."

"He's starting to understand how to play. He's asking me the right questions," Woods said. "I've kept it competitive with his par."

He also complemented his son, noting "I wish I had his move."

Woods shares two children -- Charlie, and 13-year-old Sam -- with his ex-wife Elin Nordegren, whom he divorced in 2010.