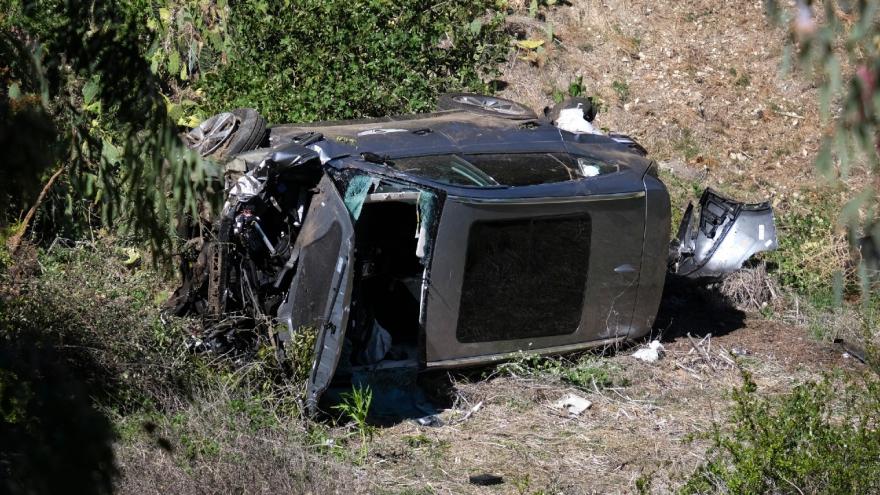 (CNN) -- Tiger Woods was "awake, responsive, and recovering" in the hospital from major surgery, according to a statement on his Twitter account on Tuesday, after a high-speed rollover car crash near Los Angeles.

The 45-year-old golf legend was driving shortly after 7 a.m. PT Tuesday in Rancho Palos Verdes when his SUV crossed a median and veered across two lanes of road before hitting a curb, hitting a tree and landing on its side in the brush, Los Angeles County Sheriff Alex Villanueva said.

He underwent a lengthy emergency surgery on his lower right leg and ankle at the Harbor-UCLA Medical Center, the statement said. The leg fractures were "comminuted," meaning the bone was broken into more than two parts, and "open," meaning the broken bone was exposed to open air, creating risk of an infection, Chief Medical Officer Dr. Anish Mahajan said in the statement.

Orthopedic trauma specialists inserted a rod into his tibia to stabilize both the tibia and fibula bones, stabilized the foot and ankle bones with a combination of screws and pins, and relieved pressure to the muscle and soft-tissue of his leg by surgically releasing the covering of the muscle, Mahajan said.

Having seen the damage at the crash site, Villanueva said it was "nothing short of a miracle" that Woods was alive.

"We have seen accidents with far less obvious (damage) that are fatalities," Villanueva told CNN's Chris Cuomo on Tuesday.

The crash represents a devastating setback to Woods' hopes of returning to golf glory and comes just a month after his fifth career back surgery. And in a life highlighted by his mastery of the golf course, it's the roadways that have proved most destructive: the 2009 car crash that led to the dissolution of his personal life and the 2017 DUI arrest that stemmed from an addiction to painkillers.

The crash and rescue

Woods, the 15-time major champion, was driving a Genesis SUV courtesy vehicle and is believed to have been traveling at a high rate of speed before the crash, authorities said. There were no skid marks or other indications of braking, Villanueva added.

Villanueva said that section of road is "downhill on a curve," and he and Gonzalez said the area is known as a trouble spot for speeding and accidents.

Deputies responding to Woods saw no evidence of impairment, Villanueva said, and they didn't ask hospital officials to take a blood draw, he said. A Los Angeles law enforcement source told CNN that no field sobriety test was administered because of the seriousness of Woods' injuries.

Woods was the only person in the car, the sheriff's department said.

Los Angeles County Sheriff's Deputy Carlos Gonzalez, who responded to the crash, found a lucid Woods still strapped into his seat belt but trapped as the SUV had rolled over onto the driver's side door.

Woods didn't seem concerned with his injuries at the time, Gonzalez said. He described Woods as calm but potentially in shock.

"I do think the fact that he was wearing a seat belt and that the vehicle safety features worked as designed by the manufacturer likely resulted in either reducing his injury or saving his life," Gonzalez told Cuomo.

Los Angeles County Fire officials arrived to break him free. Woods tried to get out of the SUV himself but was unable, Chief Daryl Osby told CNN's John Berman. He could not stand on his own, Gonzalez said.

To free him, firefighters broke the windshield with an ax and used a pry bar to move the seats and metal from around Woods' legs, Osby said.

The rescue workers put Woods in a neck collar, attached leg splints and used a backboard to get him through the giant hole in the windshield to an ambulance. He went to the hospital in serious but stable condition with injuries to both legs, Osby said.

Another car, not involved in the initial rollover incident, stopped after the crash and was rear-ended, said Los Angeles County public information officer Henry Narvaez.

In the days leading up to the crash, Woods hosted the Genesis Invitational PGA tour event and gave golf lessons to sports stars and celebrities for a TV special. He did not play in the event because of a recent back surgery.

Woods likely was headed for the Rolling Hills Country Club in nearby Rolling Hills Estates for a shoot with Golf Digest and Golf TV, said Daniel Rapaport, the Tiger Woods correspondent for Golf Digest.

"He was filming his latest series with us yesterday, which will see him giving on-course instruction to a number of celebrities including Jada Pinkett Smith, Dwyane Wade and David Spade. He was due to continue filming with us today," Golf Digest's statement said.

Tuesday's scheduled filming was to include Woods with Los Angeles Chargers quarterback Justin Herbert, a source familiar with the shoot told CNN. ESPN reported that New Orleans Saints quarterback Drew Brees was also to be a part of the shoot with Herbert.

CNN has reached out to the New Orleans Saints for comment but has not heard back.

Woods had a 7:30 a.m. call time, with shooting supposed to begin around 8. It was the second day of filming.

Rapaport told CNN's "Situation Room with Wolf Blitzer" that Woods was giving on-course golf lessons to celebrities but was not playing or hitting.

"He was in good spirits on Monday when he did that," Rapaport said of the shoot.