Time and environmental factors are complicating the search for Brian Laundrie, experts say 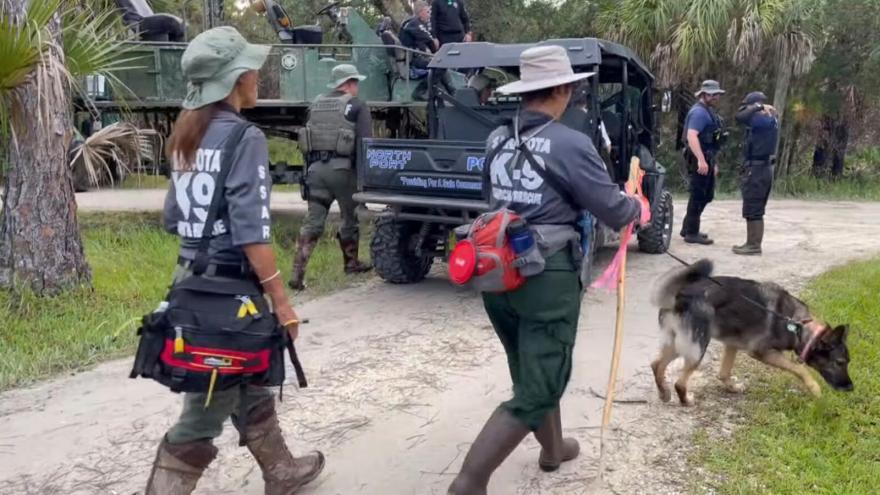 Search teams fan out at the Carlton Reserve near North Port, Florida, to search for Brian Laundrie on Sept. 22.

(CNN) -- The search for Brian Laundrie, the fiancé of Gabby Petito, is heading into another week and authorities seem no closer to finding him.

Laundrie has been charged with using two financial accounts that did not belong to him between August 30 and September 1. No charges have been brought against him in the death of Petito, whose body was found in Wyoming's Bridger-Teton National Forest.

The search is continuing as investigators try to piece together what happened to Petito, 22, and Laundrie, 23, on their road trip through the West this summer. The couple had posted online regularly about their travels with the hashtag #VanLife, but those posts abruptly stopped in late August.

Laundrie returned to his parents' home in North Port, Florida, on September 1 without Petito, police said, and was home for about two weeks. His parents told authorities September 17 that they last saw him three days earlier.

Several experts told CNN on Thursday that time is of the essence in the search for Laundrie. The conditions in south Florida make finding forensic evidence extremely difficult.

"Time is that one thing that we are constantly fighting in law enforcement," said Bryanna Fox, a former FBI special agent and associate professor in the department of criminology at the University of South Florida.

"Chris and Roberta Laundrie do not know where Brian is. They are concerned about Brian and hope the FBI can locate him," the statement read. "The speculation by the public and some in the press that the parents assisted Brian in leaving the family home or in avoiding arrest on a warrant that was issued after Brian had already been missing for several days is just wrong."

Bertolino did not immediately respond to CNN's request for comment.

Here's why experts say it's been taking authorities so long to find Laundrie.

The more time passes, the less evidence there will be

Laundrie essentially had a multi-day head start on law enforcement. When his parents told police their son had disappeared, he had already been gone for three days.

His parents said Laundrie told them he was headed to the Carlton Reserve, a 25,000-acre nature reserve near the family's home in North Port. A source close to Laundrie's family told CNN's Chris Cuomo that Laundrie left their home without his cell phone and wallet.

Bertolino told CNN on Wednesday that Laundrie actually purchased a new cell phone on September 4 at an AT&T store in North Port.

The fact that Laundrie left those two key items behind may mean there's very little digital or forensic evidence for authorities, said Fox, the USF professor. The cell phone would've helped investigators know who Laundrie was communicating with and where he may have been, while his wallet would've told them where he's spending money.

"Unlike other fugitives or people that are missing, we typically have reason to believe they're in a populated area," Fox said. "In this case, it looks like he attempted to maybe go off the grid and is not living in society. So it makes it even harder to find him."

Investigators have been searching for Laundrie at the reserve, but the conditions in south Florida make it difficult to find evidence -- or any possible remains.

"Down in Florida, during the summer and wet time, a body can start to skeletonize in less than five to seven days," said Chris Boyer, executive director of the non-profit National Association for Search and Rescue (NASAR). "And with predators, you can lose a lot of evidence that way."

Fox told CNN the tropical conditions "are among the harshest on forensic evidence."

"The odds of finding it get slimmer every day, so time is obviously really of the essence," she said.

Another location, Fort De Soto Campground in Pinellas County, has also become an area of interest, though no official law enforcement body is investigating the campground. Duane "Dog the Bounty Hunter" Chapman was searching for Laundrie at the campground Monday and Tuesday after receiving a tip, his spokesperson told CNN.

Authorities have to balance tips and actual evidence

Petito's death and the search for Laundrie has become an obsession for many, spurring digital detectives to comb through the couple's online trail and try to solve the case.

"It's very hard to remain missing when the world is looking for you, or just your family. It is really, really difficult today to remain intentionally missing," said Michelle Jeanis, an assistant professor at the University of Louisiana at Lafayette's Department of Criminal Justice who specializes in missing persons.

Jeanis said while the public is eager for updates on this case, "it seems that we have limited information for a very good reason."

Fox said researchers at USF found that media and social media are powerful and positive tools in identifying missing people. At the same time, that intense interest has highlighted how race and gender impact which of the nearly 90,000 unsolved missing persons cases get attention, and which ones don't.

But there's also a negative side to the onslaught of internet sleuths and media coverage.

"People who may be even well-intentioned could be passing on tips to law enforcement and instead of law enforcement having to find a needle in a haystack, it's now more like a grain of sand on a big beach," Fox said, explaining that every tip must be investigated.

Another problem authorities are running into is lack of resources. Boyer explained that crime doesn't stop just because there is a missing person, and there are beat cops who still have to investigate and respond to other crimes in the community.

Despite time and resources being issued in the search for Laundrie, each expert who spoke to CNN said there's still a chance to find him.

Fox said the only way Laundrie will be able to continue evading police is if he's "absolutely perfect" in hiding.

"In other words, he has to be perfect and make zero mistakes. Law enforcement, to be able to find him, they either have to find one clue or catch one mistake he made and that could blow the whole case open," she said.

The public continues to be eager about this case, said Jeanis, the University of Louisiana at Lafayette professor, but "law enforcement is surely trying to take all the steps necessary to ensure safe and protected scenes and collecting evidence."

"The public has to be patient, and that can be hard to do in the time where we have feelings where we think we can be more helpful," she said. "We're all just looking for red flags and they could be meaningless."