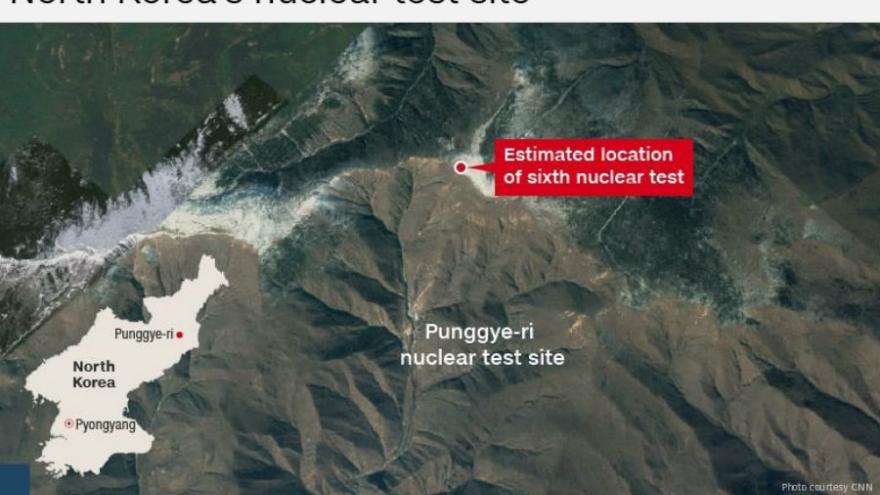 (CNN) -- Cheryl Rofer is a chemist who spent 35 years working on environmental cleanups everywhere from Estonia to Kazakhstan, disassembling and decommissioning nuclear weapons, and overseeing the destruction of chemical weapons.

But unlike international journalists, she is not on the list of people invited this week to witness the destruction of North Korea's Punggye-ri nuclear test site.

"I was hoping you were going and I could talk you into bringing me along," she said to CNN.

The small contingent of international journalists invited into North Korea departed Beijing Tuesday for Wonsan, a city on the country's east coast.

No weapons inspectors or individuals with any kind of expertise were expected to attend the event, which North Korea has said would "ensure transparency of discontinuance of the nuclear test."

When it made the announcement on April 20, the Workers' Party of Korea's Seventh Central Committee declared that the country had "realized nuclear weaponization," and to ensure the end of all nuclear testing it would "discard" the test site in the north.

Journalists from the US, China, Russia and the UK have all been invited to witness the event. They're expected to view the activity from a distance, without any real opportunity to get a sense of what might have happened inside Punggye-ri's tunnels

Bruce Bechtol says evidence that might have been collected will now be lost to the world.

"It's kind of like a murder scene where they let people like you and me trample around in it, it's the same concept," said Bechtol, a professor of political science at Angelo State University who has authored several books on North Korea.

"The North Koreans have conducted all these tests here, every single weapons test, so if they let experts in to look at these tunnels before they let anyone else in that would be potentially for us an intelligence boon," he said.

Some observers have said that the site had become partially unusable anyway due to the damage incurred after six nuclear tests since 2006, while others say the site was still in operation only months ago.

Regardless of its operating status, there is still much to be gained from allowing experts in to look around and collect various residue, says Rofer.

All those samples and tests could yield information on the kinds of weapons that were being tested, she said.

All of that information, experts say, could then be fed back to negotiators to give them a stronger hand in dealing with the Kim regime, including giving them the ability to know whether they are truly extracting concessions, or just cosmetic changes.

The prospect of such a public demolition gives Melissa Hanham, a senior research associate at the James Martin Center for Nonproliferation Studies, a sense of déjà vu.

"It's not irreversible, they eventually found a different way to cool the reactor."

In 2008, North Korea destroyed a water cooling tower at a facility state officials admitted to using to extract plutonium to build nuclear weapons. The massive explosion at the Yongbyon facility was meant to symbolize the end of Pyongyang's nuclear program.

During that time, under pressure from restrictive sanctions and international isolation, the North Koreans were more forthcoming about the extent of their program. Along with the journalists invited to watch the event were US State Department officials and observers from the International Atomic Energy Agency, CNN reported.

Among the disclosures North Korea made at the time about its nuclear program was the revelation that it had produced roughly 40 kilograms of enriched plutonium, something the US State Department said was enough for about seven nuclear bombs.

In response, then-US President George W. Bush said he would lift some US sanctions against North Korea and remove it from the administration's list of state sponsors of terrorism.

It later emerged that the North Koreans had been building a separate facility to continue producing fissile material without disclosing it to international authorities.

The world is missing an opportunity in allowing North Korea to unilaterally dismantle the site without having a chance to inspect it first, says Cheon Seong Whun a visiting research fellow at the Asan Institute for Policy Studies.

"It's very critical evidence that helps us understand the history of North Korea's nuclear program, and if North Korea is sincere about giving up its nuclear weapons," he said.

"What they have to do is provide all necessary information and documents to the international community and then invite UN inspections, North Korea doesn't have to dismantle this on its own, this isn't something that should be done in haste."

Cheon, a former South Korean government official who worked in the defense and unification departments, argues rather, that North Korea might be destroying the site now to avoid providing access to it down the road, possibly as part of a concession from a summit with Trump that is planned for June 12 but currently looking uncertain.

"North Korea's arbitrary action to dismantle this facility on its own, this is not something that we can believe is part of North Korea's declared aim of denuclearization. It's nothing more than destroying evidence."

For longtime North Korea observers, another indicator of Kim Jong Un's motives lie in the timing of the scheduled demolition -- it's happening at the same time South Korean leader Moon Jae-in is visiting President Trump at the White House.

"Look at the timing," said Cheon. "This is the time Moon is meeting Trump in Washington, this isn't just a coincidence, he wants to take advantage of this event with political propaganda."

Rofer believes even if parts of the tunnels are blown up, they can always be unearthed later should the North Koreans want to reuse the site.

"It is absolutely correct that we [the international community] seem to be making all the concessions," she said.