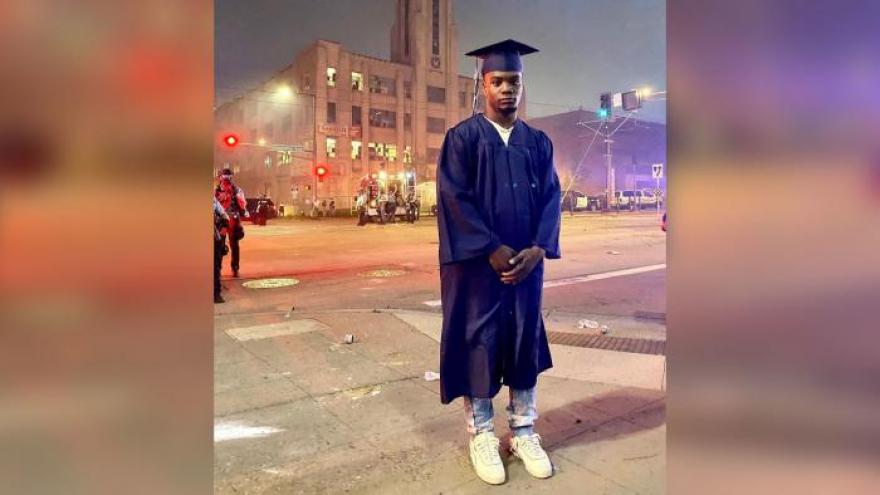 Deveonte Joseph wore his high school graduation robe to protests in St. Paul because he wanted to spread positivity.

(CNN) -- Deveonte Joseph stood out among the protesters in St. Paul, Minnesota, calling for justice after the death of George Floyd.

Instead of a mask or protective gear, the 17-year-old wore his cap and gown -- which he hasn't gotten to wear because the Covid-19 pandemic delayed in-person graduations across the US.

Joseph said he decided to wear his commencement garb on Thursday night because he wanted to do something "to put positivity in the world."

"People look at my people like we're down, like we don't have anything," he told CNN. "I just don't think we're respected enough."

Joseph said that he wanted to show that people like him are reaching their goals.

At first, he and his friends were just taking pictures around the neighborhood, but they saw the smoke from the nearby protest and decided to join in.

"I think a lot of people, including myself, were in disbelief and in awe," photographer Nathan Aguirre told CNN. "The protests had died down slightly by this point. There were still large fires burning."

Aguirre took a picture of Joseph that's been shared widely on social media, but didn't get his name in all the commotion. Later, he found out that his nephew went to school with Joseph.

Brit Lee, the sister of one of Joseph's friends, was also taking pictures and said police officers and protesters were congratulating him.

Joseph had to finish his schoolwork online after Minnesota closed schools in March because of the pandemic. He's planning to go to art school and wants to get a degree in animation.