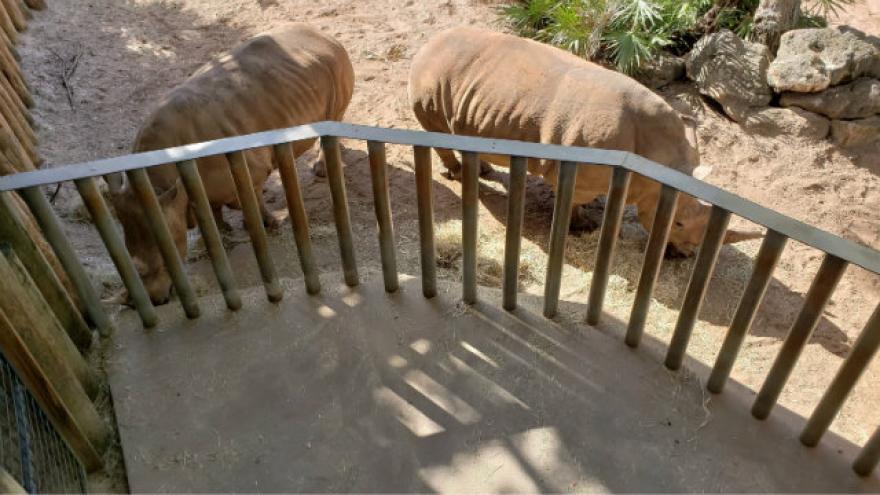 Two rhinos rammed a toddler with their snouts after she fell into an exhibit at Florida\'s Brevard Zoo, and the girl suffered a lacerated liver and bruised lung, wildlife officials said. Photo courtesy Brevard Zoo

(CNN) -- Two rhinos rammed a toddler with their snouts after she fell into an exhibit at Florida's Brevard Zoo, and the girl suffered a lacerated liver and bruised lung, wildlife officials said.

The 21-month-old also suffered contusions to her chest, back, abdomen and head during the New Year's Day incident, a Florida Fish and Wildlife Conservation Commission report said. Photos from the incident show the baby in a hospital bed with a neck brace and breathing tube. Her right cheek, right hip and navel area are visibly injured.

The 29-page report released Wednesday includes an interview with the zoo supervisor in charge of the exhibit, who told investigators the girl "somehow fell backwards into the enclosure," perhaps after losing her balance. She landed on the ground behind one of the rhino's feet.

The "well-behaved" child had been petting and brushing the rhinos through the steel bars of the enclosure for about 10 minutes, according to the report.

There were three rhinos, who "were calm during the encounter," and three zebras in the enclosure. The rhinos were eating and were positioned sideways to make them easier to pet and brush, the report said.

After his daughter fell into the enclosure, her father reached in and grabbed her. As he attempted to pull her back to safety, two female rhinos named Kibibi and Uzuri rammed her repeatedly with their noses and mouths, pressing her into the steel bars, the report said.

"It wasn't until the dad picked her up and she was in the rhino's field of view that the rhinos began getting nervous. Both rhinos backed up and were spooked and began pushing on the child," it said.

The girl's mother suffered a bruised arm trying to save the child, while the father endured scrapes and contusions after one of the rhinos struck his right arm. Their daughter was transported via helicopter to an Orlando hospital and spent five days there recovering from her injuries.

The exhibit is part of what the zoo billed as a close-up experience with white rhinos. The family was allowed to touch and brush the rhinos under the supervision of two zookeepers, the zoo said at the time.

The three family members, who are friends with one of the supervisors running the encounter that day, were the only people participating in the experience.

Following the incident, the father released a statement through Orlando Health thanking people for their concern about his family.

"Our daughter is in good care at Arnold Palmer Hospital (for Children) and is doing well. My wife was also treated for her injury and has been released from the hospital. At this time, we ask for privacy as we focus on our daughter's recovery."

The zoo, located in Melbourne, had offered rhino experiences -- with Kibibi, Uzuri and another male rhino -- daily since 2009 without any issues, it said. Officials suspended the rhino encounter and "all other premium experiences" pending a safety review, officials said.

"Probably, we'll add some horizontal pieces, which would prevent" people from slipping or squeezing between the vertical poles, said Keith Winsten, the zoo's executive director.