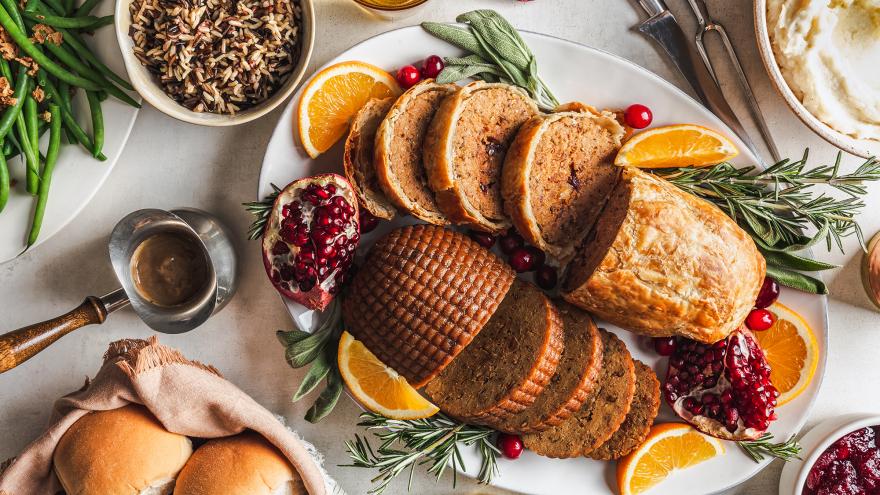 (CNN) -- Thanksgiving will look a lot different this year, with many cutting down the size of the festivities they have planned. Grocery stores are anticipating that some may do more than just host smaller gatherings — they may do away with the turkey altogether.

Tofurky, which has been selling its mock turkey roast since 1995, saw a 22% surge in holiday orders from retailers ahead of Thanksgiving this year. The spike amounted to the largest annual increase in the number of holiday roasts sold since 2015.Made from wheat gluten and tofu and filled with wild rice stuffing, the entree is sold on its own or with plant-based gravy and dairy-free cheesecake.

Over its decades-long history, Tofurky has seen spikes in its sales for different reasons. In 2006, the company saw a large uptick, for example, when mainstream retailers started stocking Tofurky's roasts.

But this year's jump isn't driven by the addition of any large store, according to the company. Instead, higher demand is coming across its retail partners. Tofurky said that demand is so high that it would produce more roasts this year if it could, but production is limited by staffing.

Demand for Tofurky's holiday products is growing as retailers try to anticipate the needs of customers during an unprecedented winter holiday season. With coronavirus cases surging across the country and health officials urging many to stay close to home and limit indoor gatherings, more people are looking for alternatives to a full-sized turkey. With interest in plant-based products on the rise, retailers want to be well-stocked with options for vegan, vegetarian and flexitarian consumers who want a plant-based centerpiece.

Sales of plant-based foods jumped 90% year over year in mid-March, when some US regions went into lockdown because of the pandemic, according to data from the Plant-Based Food Association, a trade group, and Spins, which tracks natural food sales.

"That was pretty shocking," he said.

Beyond just panic buying, the pandemic may have accelerated interest in the product from home cooks, Athos said.

"Once you have control over the food preparation, then you can start indulging in this thing you've heard about, this plant-based trend," he said. Tofurky's sales have grown by 25% in mainstream retail stores like Target, Walmart and Kroger this year. In addition to the holiday roasts, Tofurky sells tempeh, vegan sausages, plant-based deli slices and more.

Tofurky's competitors have also gotten a sales lift this year.

Field Roast, which makes plant-based meats and holiday roasts, has seen sales of its plant-based sausages grow 28.6% in retailover the past six months compared to the same period in 2019. The brand doesn't yet have data on how its holiday roasts are performing compared to last year, but expects to see those sales spike, too.

"Going into the holidays, we're seeing [a] great uptick in orders," said Dan Curtin, president of Greenleaf Foods, which owns Field Roast, noting that Field Roast's holiday roasts are on trend this year because they are the right size for a smaller gathering. "It'll also give people more options," he said. "You don't have to be just a plant-based food consumer only to try the product. You can use it as a side dish."

And consumers who aren't interested in vegan roasts but could go for a plant-based burger or sausage will have plenty of options. Impossible Foods, which makes plant-based alternatives to ground beef and sausage, and competitor Beyond Meat have been rapidly expanding their retail availability this year.