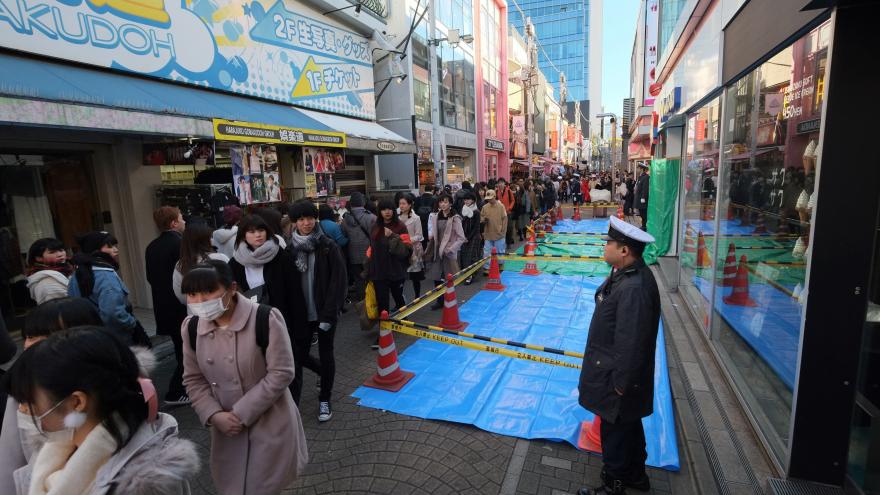 (CNN) -- At least nine people were injured, one seriously, when a car deliberately plowed into crowds celebrating the New Year in central Tokyo in the early hours of Tuesday morning.

The incident occurred on the well-known Takeshita Street in the shopping and tourist district of Harajuku, which runs parallel to the famous Meiji shrine.

The narrow, iconic street is known worldwide as a hub of Japanese youth culture and fashion, and the area famous for its "Harajuku girls," who dress in outlandish, striking costumes.

The road was closed to traffic over the New Year, largely because of its proximity to the Meiji Shrine, which is a popular destination for people on New Year's Eve -- many Japanese visit local or famous shrines over the new year period to pray for good fortune in the coming year.

The car barreled down the narrow street, which was packed with pedestrians, at around 12.10 a.m., on New Year's day, police said. One of the injured was reportedly attacked by the suspect after he had exited the vehicle after it had come to a stop.

One eyewitness told local media that he saw "people collapsed one after another and being helped." Media also reported that the driver eluded arrest for around 20 minutes before police caught him.

Tokyo Metropolitan Police told CNN that they have opened an investigation into the incident. One person, a 21-year-old man, has been detained on suspicion of attempted murder, according to police.

The injured ranged in age from teenagers to those in their 50s. One male university student remains in critical condition.

The suspect, named as Kazuhiro Kusakabe, initially told police that he had conducted a terrorist act, later saying he had deliberately driven the car down the narrow street to protest his opposition to the death penalty, telling police he "would not make any excuse" for his actions.

CNN affiliate TV Asahi reported, citing police, that a large amount of kerosene was discovered in the suspect's car. Traces of the liquid were also found on his clothes. The suspect reportedly told police that he had acted in "retaliation for the execution of Aum cult members."

The remaining members of the doomsday cult, which was found to be responsible for a 1995 sarin gas attack on a Tokyo subway, were executed in July.