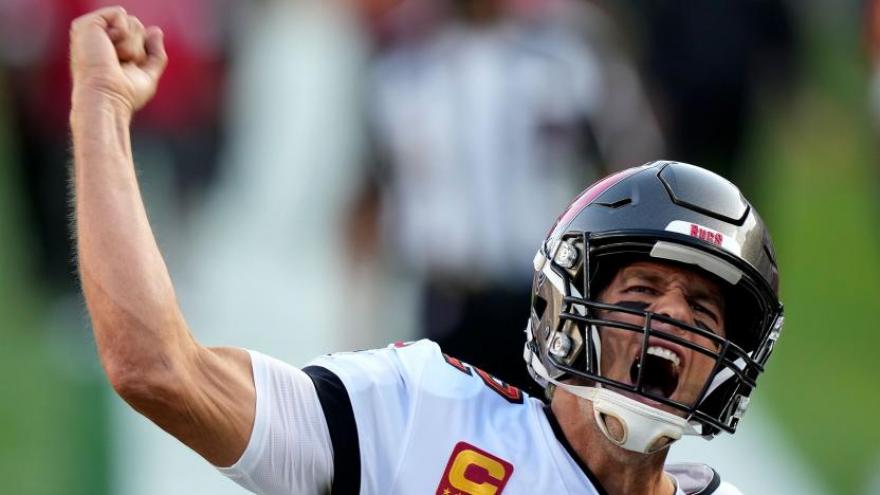 Tom Brady wins his 7th Super Bowl in his first year with the Buccaneers at age 43. In this image, Brady shouts before the NFL Super Bowl 55 football game between the Kansas City Chiefs and Tampa Bay Buccaneers, Sunday, Feb. 7, in Tampa, FL.

(CNN) -- New team, no offseason to prepare, no problem.

Tom Brady has taken things to another level not seen before: Winning a Super Bowl at age 43, in his first year with the Tampa Bay Buccaneers, and making history by being part of the first team to appear in a Super Bowl in its home stadium -- and accomplishing all of this in a pandemic.

It's not a movie script -- yet? -- but Brady helped make it reality. Who else could have done that?

The Buccaneers won Super Bowl LV at Raymond James Stadium by a score of 31-9 against last year's champs, the Kansas City Chiefs and their superstar quarterback Patrick Mahomes, viewed as the player who will take the torch from Brady one day.

This is Tampa Bay's second title, and it caps an NFL season unlike any before it, with Super Bowl LV taking place in front of a crowd of just 24,835 and roughly 30,000 cardboard cutouts of fans.

Brady has won his seventh Super Bowl, extending the mark for the most by any player. That total is more than any NFL team, as his former team, the New England Patriots, and the Pittsburgh Steelers each have six. It was his 10th Super Bowl appearance, also the most of all time.

"I'm not making any comparisons," Brady said when asked where this win ranked. "Being down here and experiencing it with this group of guys is -- every year is amazing, and this team is world champions forever. You can't take it away from us. Thank you guys. Thank you all."

For the fifth time in his career, Brady was named Super Bowl MVP, the only player to win the honor that many times. His performance Sunday was vintage, completing 21 of 29 passes for 201 yards for three touchdowns and had no interceptions.

Two of those touchdowns were to tight end Rob Gronkowski, who came out of retirement after playing with the Patriots to reunite with Brady.

Over their years together, the Brady-Gronkowski connection has produced 14 touchdown receptions in the postseason, the most by a quarterback/receiver duo of all time, surpassing Joe Montana and Jerry Rice.

Brady and Gronkowski said after the game they are not retiring, though Gronkowski will be a free agent. Their head coach, 68-year-old Bruce Arians, who became the oldest head coach to win a Super Bowl, is sticking around, too.

"This really belongs to our coaching staff and our players," Arians said. "This is your trophy. I didn't do a damn thing. You guys won this game, alright? You came together as a band of brothers and you made it happen. So proud of all of you."

As for Mahomes, it was a rough day for last season's Super Bowl MVP. He was sacked three times, threw two interceptions and had no touchdowns. Additionally, the Chiefs, who had an early 3-0 lead but couldn't get going, accumulated 120 penalty yards.

"Obviously I didn't play the way I wanted to play," Mahomes said. "What else can you say? All you can do is leave everything you have on the field, and I feel like the guys did that. They were the better team today. They beat us pretty good, the worst that I think I have been beaten in a long time."

On Thursday night, Britt Reid was involved in a crash that sent two young children to a hospital, authorities said. A 5-year-old remained in critical condition Saturday night, according to police. Britt Reid did not travel with the team to Tampa, Florida, for the Super Bowl.

"My heart goes out to all those who were involved in the accident," Andy Reid said. "In particular, the family with the little girl, who is fighting for her life. It's a tough situation. I can't comment on it any more than what I am here. ... Just from a human standpoint, my heart bleeds for everybody involved in that."

Brady: 'We came together at the right time'

But it's not just Brady's age. It's that's he doing this with a new team after spending 20 seasons with the Patriots, where he won his first six Super Bowls with head coach Bill Belichick. It's unlikely that kind of combination seen during the Brady-Belichick era will happen again.

And it's not like Brady went to a team that had an illustrious postseason history. The Buccaneers hadn't been in the playoffs since the 2007 season. Until Sunday, this franchise's crowning moment was winning Super Bowl XXXVII against the then-Oakland Raiders to end the 2002 season.

Brady also switched teams during a pandemic, not being able to immediately -- at least officially -- practice with his new team until July 29, far from the typical operating procedure for NFL standards. With strict Covid-19 protocols, there weren't the usual opportunities to bond with teammates. There were no preseason games.

Brady and the Buccaneers started the season 7-5. But after losing to the Chiefs at home in Week 12, however, the Buccaneers didn't lose again, winning eight consecutive games, including three on the road during the NFC playoffs to reach Super Bowl LV.

"I'm so proud of all these guys down here, everything we dealt with all year," Brady said. "We had a rough month of November but BA had all the confidence in us. The team had a lot of confidence. We came together at the right time. I think we knew this was going to happen, didn't we? We ended up playing our best game of the year."

Brady is not the same quarterback as he was in the 2001 season, when he won his first Super Bowl. But he clearly has plenty left in the tank. He previously has said he wants to play until he's 45, and earlier in the week, he said he'd consider playing past that age.

Perhaps it's fitting, with so many people staying at home because of the pandemic, that Tampa Bay became the first team to play at its home stadium in the Super Bowl. Just add that as another layer of the magic Brady seemingly brings.