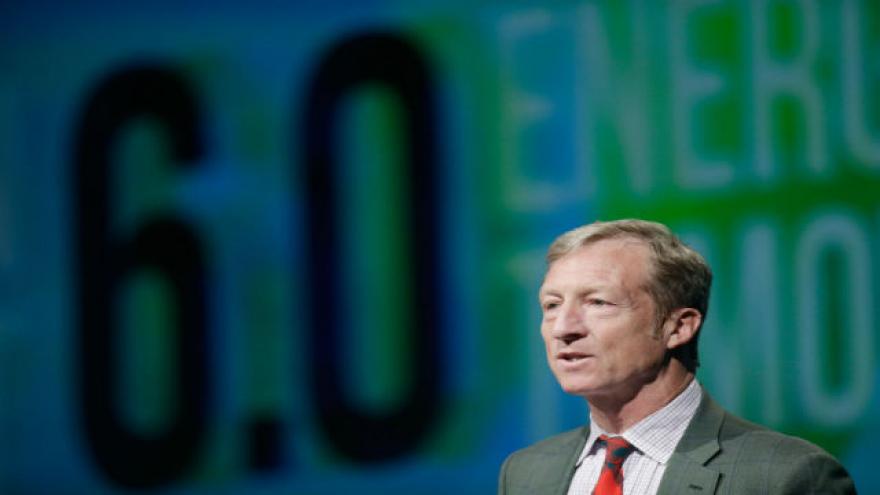 (CNN) -- Democratic mega-donor and billionaire environmentalist Tom Steyer on Sunday defended his $20 million national television and digital ad campaign calling for Congress to impeach President Donald Trump, saying "it's very important and urgent that we get him out of office."

"The fact of the matter is this President has performed in a lawless way throughout the campaign and throughout his presidency and he is an urgent threat to the American people," Steyer told CNN anchor Dana Bash on Sunday morning's "State of the Union." "So to sit here and wait doing absolutely nothing is the wrong thing to do. The American people want this man impeached."

Some Democratic leaders, including House Minority Leader Nancy Pelosi of California and Minority Whip Steny Hoyer of Maryland, have said now is not the time for House Democrats to push for impeachment.

"That should not be overturned except for the most egregious and demonstrable facts, and both Leader Pelosi and I believe it is not timely to address that issue given what is in front of us," Hoyer said earlier this month.

Other House Democrats, however, have called for Trump's impeachment, with Rep. Steve Cohen, D-Tennessee, introducing articles of impeachment earlier this month.

Steyer denied on Sunday that his ad buy is driven by a desire to bolster his political brand, saying a main reason he is calling for Trump's impeachment is he believes the President has violated the Constitution by his actions related to the Justice Department investigation into whether Russia interfered in the 2016 election.

"It's clear that he has violated the Constitution in the sense that he's violated his trust with the American people through obstructing justice by firing the head of the FBI for what he said explicitly was over the Russia investigation," Steyer said, referring to the Trump administration's firing of James Comey in May. "He has taken money from foreign governments almost since the very first day that he took office. I don't think there's any question that he has, in fact, met that standard for impeachment."

The White House did not immediately respond Sunday to a request for comment on Steyer's remarks.

Steyer, who pumped more than $160 million into Democratic politics through his NextGen America group in the last two election cycles, is expressing his vehement opposition to Trump through ads and his organization, which is registering and mobilizing voters.

Steyer is paying for the ads himself and they are not part of the NextGen America political apparatus.

The ads point to a website, NeedToImpeach.com, which features an open letter where Steyer takes clear aim at California Sen. Dianne Feinstein, citing -- without using her name -- Feinstein's comment that Trump "can be a good President." Feinstein has since downplayed the comment.

Steyer has been rumored to be considering a run against Feinstein in 2018, but he did not say whether he will or won't take her on next year.

"Well, I haven't said I've considered running," Steyer said when Bash pressed him on the issue. "What I have said is that I haven't ruled it out. I don't need to rule it out, and I can have time to think about it. The fact of the matter is I am spending all my time working to make sure that this petition gets as broad a listen as possible."