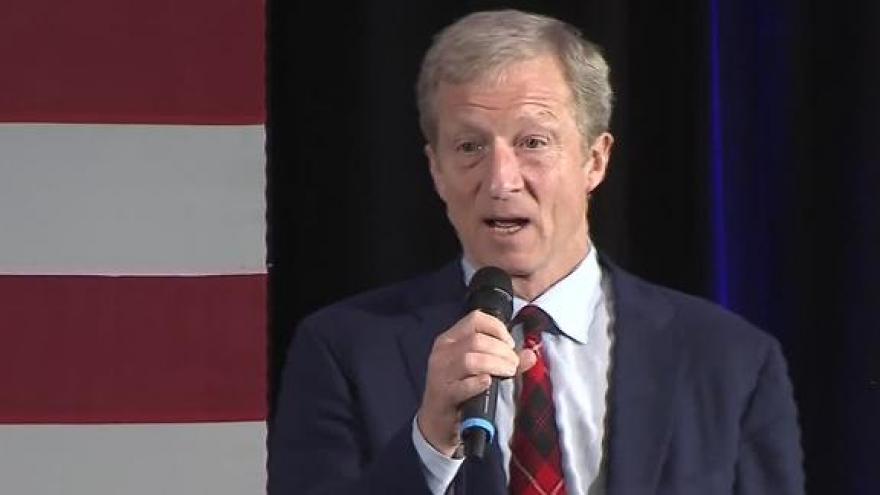 (CNN) -- Tom Steyer ended his presidential campaign on Saturday night after the billionaire businessman failed to gain traction in a large field of Democratic candidates.

Steyer exited the race after he failed to claim victoryin South Carolina, a state he invested heavily in, hoping it would turn around his sputtering run.

"I said if I didn't see a path to winning that I'd suspend my campaign," he said. "And honestly, I can't see a path where I can win the presidency."

The businessman's decision comes after disappointing showings in the race's first three contests in Iowa, New Hampshire and Nevada. In Nevada, Steyer outspent the rest of the Democratic field on advertisements by more than $13 million.

Steyer spent more than $200 million on advertising for his presidential campaign, and contributed about $155 million in the fourth quarter of 2019. But the power of Steyer's money was partially blunted late in his campaign by the entrance of former New York Mayor Michael Bloomberg, who has spent more than $500 million on ads in a few short months, effectively watering down Steyer's omnipresence.

Steyer spent considerable time and money in South Carolina, and there were signs his investment was paying off. The billionaire businessman spent more than $22 million on television and radio ads in the state, hoping that direct and persistent outreach to black voters could cut into former Vice President Joe Biden's strength with the powerful voting bloc. A recent Monmouth University poll found Steyer at 15% in the state, neck-and-neck with the race's front-runner Vermont Sen. Bernie Sanders and behind Biden.

Before officially launching his campaign in July, Steyer operated as a funding force in Democratic politics. He spent millions bankrolling candidates and organizations that promoted liberal causes and the impeachment of President Donald Trump. Steyer starred in self-funded television commercials calling for Congress to remove Trump from office. Those ads were powerful in the early states, where voters who backed Steyer said they liked the fact that he spearheaded the impeachment effort.

The longtime Democratic donor, whose net worth reached $1.6 billion this year according to Forbes, said he would make tackling the global climate crisis a top priority of his administration and vowed to combat what he called the "undue influence" of corporate power on the US economy. He called for a $15 minimum wage, congressional term limits and the repeal of Citizens United, the 2010 Supreme Court decision that eased restrictions on corporate campaign spending. Steyer said he would repeal the Trump tax cuts and install a 1% wealth tax on those whose net worth is above $32 million.

Steyer broke with progressive leaders on "Medicare for All," and said he would prefer to build on the current system, as it exists under the Affordable Care Act, and push for a public option, or a government-backed insurance plan.

In the end, though, Steyer's campaign became a case study of how even hundreds of millions in personal spending cannot directly lead to success in a presidential election.

Steyer did get a burst of attention in the final days of his campaign, turning in his most aggressive debate performance on Tuesday. And on the eve of the South Carolina primary, a video of Steyer dancing onstage with rapper Juvenile at an event in South Carolina went viral.