Thousands under threat after tornadoes damage homes, schools in Ohio 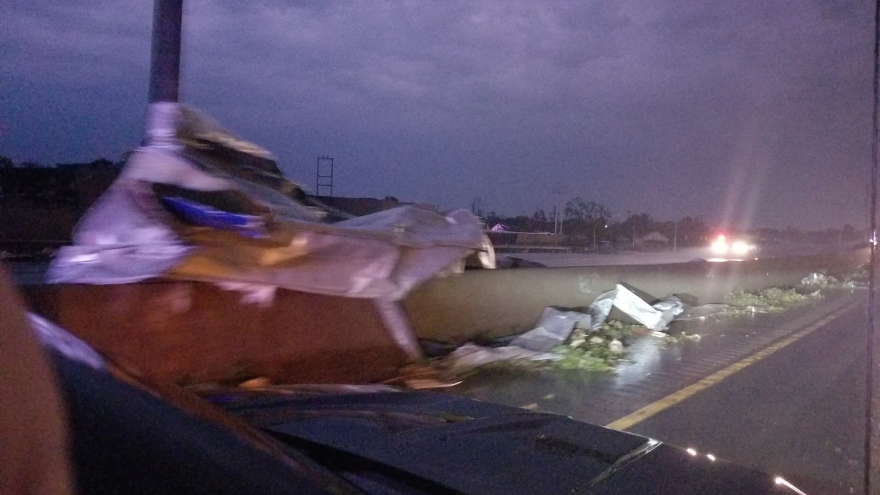 The first suspected tornado crossed I-75 north of the city around 11:07 p.m. and carried a \"tornado emergency warning,\" the highest the weather service gives. The second crossed the highway about three miles away. Source: Mike Johnson/Twitter
By Christina Maxouris, CNN

(CNN) -- The devastating severe weather that has barreled across much of the Plains and Midwest this week is still not over.

The first suspected tornado to hit Dayton crossed I-75 north of the city around 11:07 p.m. and prompted a "tornado emergency warning," the highest the weather service issues. The second crossed the highway about three miles away. Three minor injuries were reported, Dayton fire Chief Jeffrey Payne said.

A couple counties to the northwest, a suspected tornado touched down in the city of Celina, injuring seven people, according to Mercer County Emergency Management Agency Director Mike Robbins. Three of them were in serious, but not life-threatening condition. The other four people suffered minor injuries, Robbins said.

The areas that saw the most significant damage from the tornado were a neighborhood and an apartment complex in the northwest part of Celina, according to Robbins. The search and rescue mission continued early Tuesday.

More than 70,000 utility customers were without power in Ohio, the weather service in Wilmington, Ohio, said early Tuesday, citing data from the US Department of Energy.

The weather service will be conducting damage surveys for the next few days in the areas of Celina, New Madison, Laura, Dayton and Laurelville.

"We have downed power lines, but the biggest thing we're seeing is that there are trees just gone," Otten told WHIO. "My neighbor across from me has four huge trees and they're just shredded. Some out of them are out of the ground and others just have no limbs left on them."

Beavercreek Schools are already closed for the year, he said, but if they weren't, "I'd probably be closing."

"There are wires down and trees laying across the road."

Brookville Schools superintendent Tim Hopkins said a part of one school's roof was blown off and the front doors had been blown in.

The complex was "just a mess," he told WHIO, adding school will be canceled Tuesday.

The rest of the Central Plains, Midwest and the Ohio Valley into the Northeast are also all at risk of a few tornadoes, large hail and damaging winds as ongoing storms continue into Tuesday.

There are 2 million people under a severe thunderstorm watch in parts of Nebraska, Iowa, Missouri and Kansas. The greatest threat will be in cities including Tulsa, Oklahoma; Wichita, Kansas; Lincoln, Nebraska and Kansas City, Missouri, according to CNN meteorologist Taylor Ward.

"We continue to be stuck in the same pattern that plagued the country for (the) past several days," Ward said. "A large dome of high pressure will bring sweltering temperatures to the southeast, while the middle of the country will continue to see the threat of severe storms and flooding."

Memorial Day brought severe weather for much of the Midwest. There were up to 27 preliminary reports of tornadoes in Iowa, Minnesota, Illinois, Indiana and Colorado, according to the National Oceanic and Atmospheric Administration's Storm Prediction Center, and severe weather in suburban Chicago caused severe flooding.

Parts of the Arkansas River could crest over 4 feet above the record, meaning "catastrophic flooding is possible in the towns of Van Buren and Fort Smith," Hennen said.

The river is rising around the city of North Little Rock, the city government said on Facebook on Tuesday, and officials are concerned.

"The first thing everyone needs to understand is we are dealing with two situations. One is the rising river. The second is the ability to drain any storm water we might get here in our city over the coming days," the city said on Facebook. "Our city's storm water drains to the river and if it can't go out, it could cause additional flooding."

City engineers are working with the US Army Corps of Engineers to monitor the forecasted river levels and determine the areas which could be affected, the city said.

"The Mayor's office will be coordinating staff to visit every home potentially affected by flooding," the city said on Facebook. "We will be knocking on doors in the coming days to inform them of the potential threats to their homes."

Officials will also be dropping tons of sand to multiple locations and have "thousands of sandbags available."

In Oklahoma, where six people were killed in severe weather last week, the situation "still could get worse," Gov. Kevin Stitt said Monday.

"We still have water still rising in the east," he said. "We are not out of the woods yet."

The governor said he toured the destruction left by a tornado that struck El Reno on Saturday night, noting it was "unbelievable how violent" it was.

Some of the mobile homes, he said, "look like they were blown up."

In Tulsa, the weather service warned of severe weather threats ramping back up late Tuesday with storms, "very large hail" and tornado threats all in the cards.

The Army Corps of Engineers on Monday said it was accelerating the intentional release of water at the Keystone Dam, about 20 miles west of Tulsa. The water was being released to keep Keystone Lake from topping the floodgates.

This will increase the strain on some of Tulsa's levees, city Mayor G.T. Bynum said. He urged residents behind levees A and B to temporarily relocate.

Scorching temperatures in Georgia and Carolinas

Temperatures hit 99 degrees in Columbia, South Carolina on Monday and 100 degrees in Augusta, Georgia, both records, according to meteorologist Ward. Gainesville, Florida reached 102 degrees, an all-time record for the month of May. Several other cities were close to the century mark.

Parts of Georgia and the Carolinas will likely see triple digit temperatures on Tuesday and Wednesday, Ward said.