Tourist-starved Greece takes a gigantic leap of faith on Covid 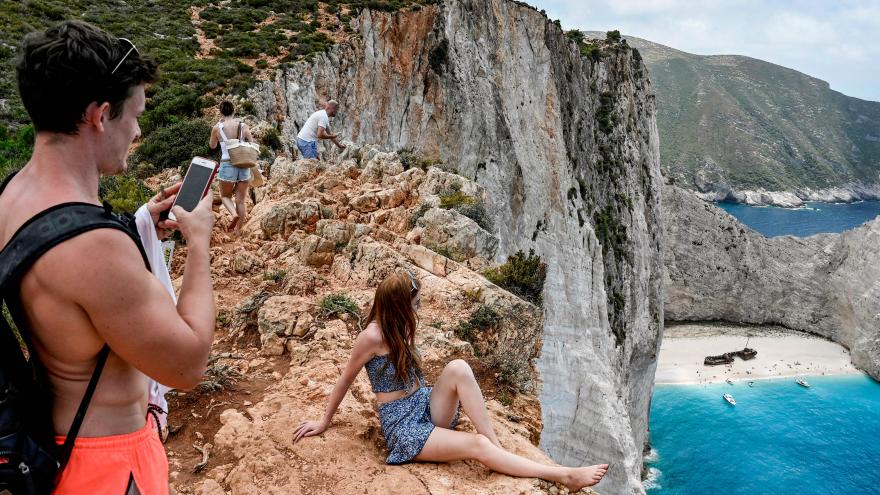 Greece opened up to visitors in 2020, but tourism revenues were drastically down. - Louisa Gouliamaki/AFP via Getty Images

London-born Beach, 18, who grew up in Ibiza, and her colleague Claussen, 19, from Hamburg, flew in a few days ago, after Greece's decision to lift a quarantine requirement for vaccinated travelers and those testing negative for Covid-19 from key tourism markets.

"It's model season, so we're here for work but also combining it with a vacation," says Beach. "The weather is amazing, the people are really welcoming and the food is really good. Everyone speaks English, so it's easy to get around."

There aren't many other tourists currently enjoying what would be the start of peak season in Athens, but there soon could be.

As of April 19, residents of the European Union, the United States, the UK, Israel, Serbia and the UAE who have been inoculated or present a negative PCR test up to 72 hours prior to arrival are free to enter Greece and must abide by domestic restrictions on movement.

The country has promised to open to all other countries on the same terms, as of May 15.

The move has so far been unmatched by any other major tourist destination in Europe -- where new waves of Covid-19 are currently prompting heavy lockdowns. And even for Greece they represent a bold step at a time when restrictions for locals are still in place.

A tiny minority in Greece, including some opposition politicians, see it as an unnecessary gamble, risking a further rise in Covid cases, which reached a new peak earlier in April. It comes at a time when healthcare services are already stretched.

But in a country where 20% of national income depends on cash from visitors and the effects of a decade-long financial crisis are still being felt, most people see it as a vital step out of a financial hole, insisting that vaccines and testing will help weather any virus resurgence.

A good place to travel

For the first visitors, the easing of restrictions in Greece is already proving a welcome contrast to tighter controls at home.

"In Germany, Covid-19 restrictions are much stricter," says Claussen. "Things are much more relaxed here. It's a good place to travel to right now and Greece really needs tourists," she says.

She and Beach are thrilled to learn that restaurants and bars, which have remained closed for much of the past year but can provide delivery and takeout, are due to open for outdoor dining on May 3.

"It will be nice to be able to go out for a cold beer after working a 12-hour day," says Claussen.

For Greek citizens, the official messaging around the country's opening up is mixed. While the government has taken to the international stage to throw doors open wide and tantalize visitors with the prospect of warm Mediterranean sunshine, locals are still subject to restrictions.

Greeks remain in lockdown and are required to send an SMS or carry a handwritten note in order to leave their homes to visit a doctor, assist someone in need, shop at the supermarket or get some exercise, among other restricted activities.

For now, they can only move between municipalities within their prefecture on weekends. Masks remain mandatory indoors and out.

On Wednesday, Greek Prime Minister Kyriakos Mitsotakis announced measures, including a strict ban on domestic travel around the May 2 Orthodox Easter, the country's most important holiday, for a second consecutive year to minimize virus transmission.

There is some light at the tunnel's end. Greece's vaccination program is speeding up, with appointments for those in their 30s opening up next week. Rates of transmission, intubation and death appear to be decreasing slightly, and Greece's Covid toll of 329,134 cases and 9,864 deaths is relatively low.

Earlier this month, store owners breathed a sigh of relief after being permitted to welcome customers with an in-store appointment or picking up items ordered in advance. Schools are in the process of reopening with the aid of self-testing kits for teachers and students.

Dr. Theoklis Zaoutis, professor of pediatrics and epidemiology at the University of Pennsylvania School of Medicine and a member of the Greek government's Covid-19 advisory committee, tells CNN that the decision to open is essential to restoring national morale.

He says officials are willing to slam on the brakes if Covid cases start to get out of hand.

"We want to give [the Greek] people a ray of hope, given that everyone is tired," he tells CNN. "If the numbers get better or worse, we have an opportunity to change the road map," he says.

"We have two tools now that we didn't have last year, namely vaccines and self-testing kits. Twenty-five percent of the population has received at least one vaccine dose. The goal is to increase vaccination across all age spectrums."

Despite the government's move to warm up the tourism engines -- following a disastrous 2020 that saw arrivals Greece-wide plummet from a record 31.3 million in 2019 to 7.4 million last year -- by gradually phasing in arrivals, it appears that travelers are hesitant, for now.

Most of the smaller hotels dotted around Athens remain shuttered, with many expected to open on or after June 1 in line with their counterparts on the rest of the mainland and the islands.

Boutique property 18 Micon Str., a short walk from Monastiraki Square, gingerly opened its doors to guests in mid-March. Occupancy for the month of April is at a mere 10% and exclusively Greek, whereas in 2019 it was at 89%, says Frini Spanaki, director of the company that owns the hotel.

She is cautiously optimistic about the reopening of tourism.

"We have bookings mostly from mid-May onwards, the majority from the UK, US, Israel, France, Denmark and Belgium, with 99% of them on a flexible basis," says Spanaki, who points out that flight schedules have not yet been stabilized.

'Needle in a haystack'

Meanwhile, the government has said tourism industry workers will be given vaccination priority in coming weeks.

"I believe Athens is a safe destination," adds Spanaki. "Safeguarding the health and safety of visitors has now become ingrained in the culture of all sectors. Therefore, there is no reason anyone should hesitate to book a holiday in Athens or on the islands."

On a recent spring morning along the pedestrianized streets around the UNESCO World Heritage-listed Acropolis in Athens, the tourists were conspicuous by their absence.

At the entrance to the Acropolis, a trio of tour guides, their state-issued permits slung around their necks, could be seen idling on a bench in the shade.

"If you're interested in a tour, let us know," one of them calls out to a group of young Greeks passing by the ticket office. There is no one waiting to purchase a ticket, let alone the usual long queues.

Asked if they've seen any tourists around, one responds: "It's like looking for a needle in a haystack."

On Parthenonos, a side street in the shadow of the Acropolis, where elegant interior design stores and jewelry studios, like The Art of Turtle, are fast replacing tourist shops trading in tacky plaster cast statues of Greek gods, owner Katerina Rodopoulou isn't holding her breath for a quick upturn in fortunes.

Rodopoulou, who crafts delicate silver earrings and necklaces by hand, has yet to receive a customer from abroad since reopening two weeks ago. She believes the country should focus on restarting the wider economy, and not simply wait on tourist arrivals.

"It's a somewhat strange situation, in terms of how visitors will come here without being quarantined and what will happen here with vaccination. It all seems very unclear," Rodopoulou says.

"I don't expect that visitors will start flooding in on May 15. I think people might even be slightly more reluctant to travel this year because Greece hasn't demonstrated it is effectively handling the pandemic."

While it remains to be seen whether Greece's mass-market visitors will be cautious, there are signs that upscale travelers are already showing interest.

Greece is particularly keen on attracting Americans who were unable to travel to the country last year, not least because it aligns with the Tourism Ministry's efforts to attract travelers with a higher spend.

Mina Agnos, founder and president of inbound destination management company Travelive, says holiday bookings for Greece from her clients, 70% of whom are North American, are coming in thick and fast.

"We've had a lot of early bookings, especially for August and September. I think September will be peak season this year," she says.

"There has been a shift this week after the announcement that Greece is reopening. It looks like we'll have a good amount of travelers coming from the US this year, particularly since they couldn't visit last year."

Agnos points out that, so far, demand for vacations on the islands has far outweighed that for Athens.

"What I'm seeing is a focus on longer stays on the islands. You have the work-from-homers who want to stay for longer periods of time, even for a month," she says.

"You used to see people, especially Americans and Canadians, wanting to do a lot of things in a short period of time, whereas now they take direct flights from European countries to the islands. They might stay on Paros for a couple of weeks and do some day or overnight trips to nearby islands like Mykonos, Naxos, Santorini and Milos."

Agnos also reports a very substantial increase in yacht charters, especially catamarans and sailboats, which she describes as "the ultimate social distancing vacation," as well as multi-generational holiday bookings.