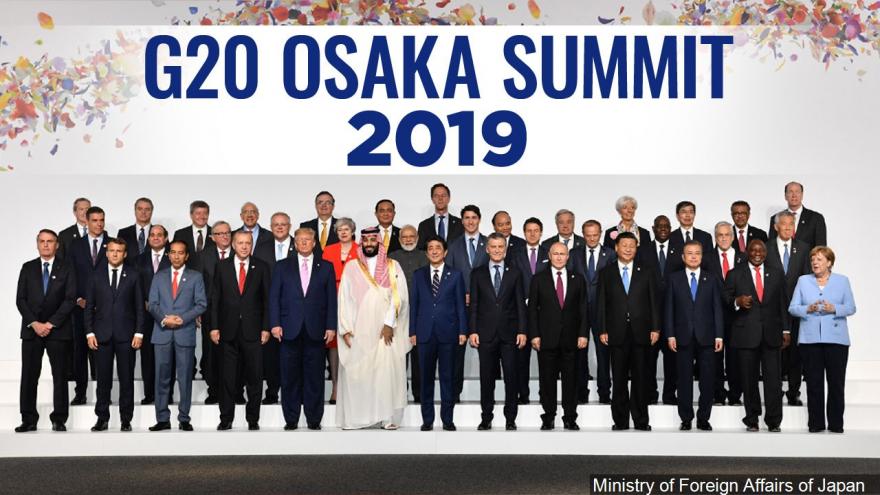 OSAKA, Japan (AP) — Trade and geopolitical tensions, and the looming threat of climate change, are on the agenda as the presidents of the United States and China and other world leaders gather in Osaka, Japan, for a summit of the Group of 20 major economies.

While prospects for detente in the trade war between the U.S. and China are in the spotlight, many participating are calling for a broader perspective in tackling global crises.

"This will be a difficult G-20, there are global challenges to be met, we need to step up to avoid the climate threats, ... reform the World Trade Organization and prepare for the digital revolution," Donald Tusk, president of the European Union Council, said at a meeting with Japanese Prime Minister Shinzo Abe.

The summit comes at a time of growing international tensions, for example, over Iran's nuclear deal, as well as disputes between the United States and China over trade and technology.

President Donald Trump arrived Thursday evening and was due to meet with Chinese President Xi Jinping on Saturday as the G-20 meetings conclude. Accompanying him were U.S. Trade Representative Robert Lighthizer and Commerce Secretary Wilbur Ross.

A Chinese foreign ministry spokesman in Beijing said China intends to defend itself against further U.S. moves to penalize it over trade friction.

Threats by Trump to impose more tariffs on Chinese exports "won't work on us because the Chinese people don't believe in heresy and are not afraid of pressure," Geng Shuang said.

China has sought to gain support for defending global trade agreements against Trump's "America First" stance in gatherings like the G-20.

The state-run Xinhua News Agency published a commentary Thursday noting that the G-20's rise to prominence came with leaders' efforts to contain the damage from the 2008 global financial crisis.

"While the global economic recovery remains fragile, it now encounters a surge of anti-free trade rhetoric and protectionist measures that threaten to upend the rules-based multilateral trading regime," it said.

Xi was also expected to meet with Japanese Prime Minister Abe on Thursday evening, seeking a breakthrough after years of strain over territorial disputes. It is his first visit to Japan since he became China's top leader in 2013.

A visit by Xi to North Korea last week raised hopes for some movement in the impasse with the U.S. over the North's nuclear program. Trump is due to visit South Korea after leaving Japan, raising speculation there may be more news on Korean issues during his Asian travels.

Trump has at times found himself at odds with other leaders in such international events, particularly on issues such as Iran, climate change and trade.

Abe has sought to make the Osaka summit a landmark for progress on environmental issues, including climate change. French President Emmanuel Macron reinforced that message on Wednesday during a state visit to Tokyo, where he described climate change as a "red line" issue for endorsing a G-20 communique.

"It's the moment to be truly in time in the face of history and to fulfill our responsibility," Macron said. "I will not sign if we don't go further in our ambition about climate change. That would mean all those summits are for nothing."

On the periphery of the Osaka meetings, activists belonging to a coalition of 50 environmental groups protested outside a coal-fired power plant in the nearby port city of Kobe.

They chanted "No coal Japan!" while raising an inflatable depicting Abe, taking aim at his efforts to promote such projects across the globe. They also want more aggressive efforts by the Japanese government to help curb climate change.

Japan is one of the largest funders of coal-fired power stations overseas, having ramped up their use inside the country after most nuclear power plants were idled following the 2011 nuclear disaster in Fukushima. The effort to offset the loss of the generating capacity has slowed Japan's own progress in curbing the carbon emissions that contribute to global warming.

"We made this balloon and organized this protest to make him feel embarrassed, have him feel the pressure inside and outside Japan," said Hanna Song of the Japan Center for a Sustainable Environment and Society. "We want him to stop funding coal and not to make climate change worse."

The leaders, arriving steadily throughout the day under heavy monsoon rains, were well insulated from such protests by the security blanketing Osaka, a business center of 2.7 million in western Japan.

The authorities closed roads and brought in platoons of extra police.