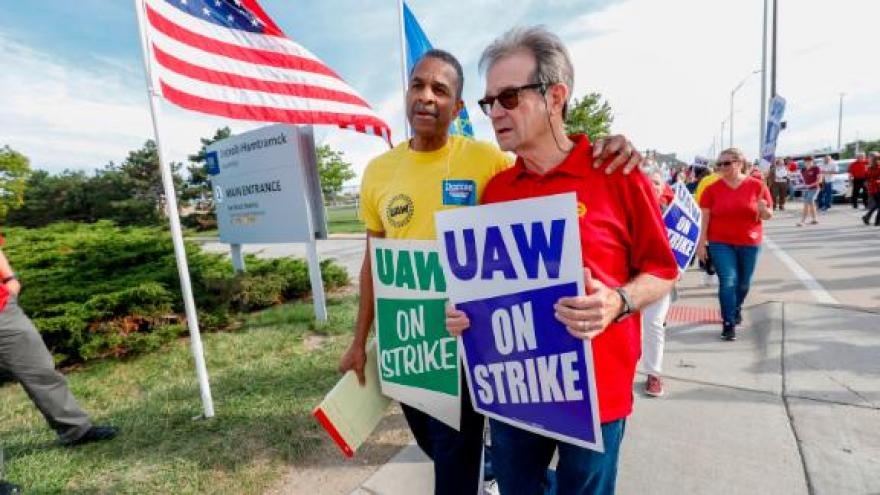 (CNN) -- The trade war is hurting America's factories, but it's not the only culprit. The strike at General Motors and Boeing's 737 Max crisis are taking a toll as well.

This trifecta of challenges worries analysts and economists that the manufacturing sector could contract for the third-straight month in October. Lower output from American factories could drag down US GDP growth in the third and fourth quarters.

American manufacturing is already hurting. Trade tensions between the United States and China have weighed on global demand and input costs. A trade deal could help, but it wouldn't alleviate the impact from the ongoing GM strike or the seven-month grounding of Boeing's workhorse jet.

GM and Boeing are two of the largest industrial companies in the United States,and their struggles will make adent in October factory activity.

"The full effect of the GM strike will be felt in the October data," said Tom Derry, CEO of the Institute of Supply Management. When the strike will be resolved remains unclear.

"I wouldn't expect us to be out of contractionary territory in manufacturing and the GM situation will make whatever the number would have been a little worse," Derry added.

The GM strike, in which 50,000 workers walked off the jobin mid-September, has still not been resolved. It is costing the company some $90 million a day. The disruption is also rippling through the car maker's supply chain. Some 10,000 American companies supply GM with products and services, like car seats and computer chips. Many have had to cut back production due to the work stoppage.

Economists polled by Refintiv have average expectations of 47.8 for the Institute of Supply Management's October manufacturing index — down from the previous month. (A reading below 50 indicates the manufacturing sector is contracting.) The index, which will next be published on November 1, has fallen for two months in a row.

GM's strike could also show up in the October jobs report. With nearly 50,000 workers not receiving their regular salaries, it could even have an effect on consumer spending during the holiday season.

Meanwhile, Boeing's scaled back production of its 737 Max is weighing on its export contribution, as many of those grounded jetswere destined for foreign markets.

The grounding already shaved a quarter percentage point off second quarter GDP, Michael Pearce, US economist at Capital Economics estimates. This drag could persist into the end of the year. In July, the company said it might have to temporarily halt production of the jet, which was grounded in March after two fatal crashes.

The New York Federal Reserve's GDP forecasting model estimates GDP growth of 1.3% in the fourth quarter, compared with 2% in the third quarter.

Although the American consumer has broadly remained strong throughout the turbulence of the year, the trade war has also begun to show up in confidence surveys. Together this also doesn't bode well for consumer data in the fourth quarter. Even though Friday's University of Michigan consumer sentiment survey was better than expected, with fewer survey participants mentioning the trade war, nearly a third of people still brought it up as a concern.

But unlike the trade war, the GM strike could be resolved relatively soon, leading factory activity to rebound. So its negative impact on the manufacturing sector or GDP data might be short lived.