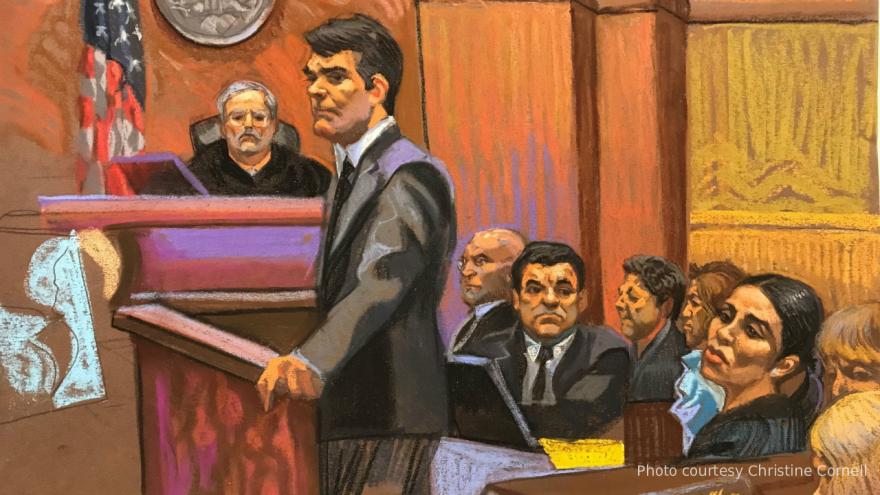 (CNN) -- Most drugs are smuggled into the United States onboard fishing boats, trains, tractor-trailers and ordinary cars that come into the country at legal ports of entry, according to former cartel members who've testified in the trial of notorious cartel leader Joaquin "El Chapo" Guzman.

Some cartel members have testified about using underground tunnels. But none have said they've transported drugs into the United States at unwalled sections of the border.

The testimony comes at a time when President Donald Trump's push for a border wall includes arguments that it would help stop the flow of drugs into the United States.

Trump tweeted Friday that without a steel barrier or wall along the US-Mexico border, "our Country cannot be safe. Criminals, Gangs, Human Traffickers, Drugs & so much other big trouble can easily pour in. It can be stopped cold!"

US Border Patrol seized nearly 480,000 pounds of narcotics at the US-Mexico border between legal ports of entry during fiscal year 2018, said Department of Homeland Security spokeswoman Katie Waldman. But the department has not provided data about the amount of drugs seized by authorities at legal border crossings.

A spokeswoman for the Drug Enforcement Agency, Mary Brandenberger, said she was unable to provide more details because of the lapse in government funding during the partial shutdown.

From tunnels to legal ports of entry

In Guzman's case, the government's own witnesses -- many of them former Mexican cartel associates -- testified that after the government cracked down on smuggling tunnels, they began relying on legal ports of entry to bring drugs into the country.

Former high-ranking Sinaloa cartel leader Jesus Zambada Garcia testified about Guzman's use of tunnels in the early 1990s to quickly smuggle drugs such as cocaine into the United States, earning him the nickname "El Rapido," or "The Fast One."

"(A tunnel) is the most secure way to cross drugs to the US -- the easiest way to cross over weapons," Zambada Garcia testified.

Zambada Garcia was arrested in Mexico City in 2008 and extradited to the United States, where he pleaded guilty to importing, distributing and selling cocaine and belonging to a continuing criminal enterprise. He has not been sentenced but could face between 10 years and life in prison.

Tractor-trailers were, and continue to be, a popular method of smuggling in narcotics. Some trucks are fitted with a "double bottom" that has hidden compartments. Others are filled with goods, such as large cans of chilis, that contain sand surrounding a specially made, cylindrical brick of cocaine. If shaken by authorities, the sand makes the cans sound like chilis are moving around inside. From about 1990 to 1993, nearly 30 tons of cocaine were smuggled into the United States using this method, Zambada Garcia said.

Zambada Garcia's nephew, Vicente Zambada, testified that drugs were often placed in "clavos" -- hidden compartments in cars -- and driven across the border through legal ports of entry. The younger Zambada was once groomed to take over the Sinaloa cartel by his father, Ismael "El Mayo" Zambada, who worked alongside Guzman.

Vicente Zambada pleaded guilty to drug trafficking charges and is now incarcerated in the United States.

"Mexican families were hired to drive cars with secret compartments across the border at Juarez, sometimes three or four times a day," he said.

There was also a time when Sinaloa associates sent drugs into the United States on trains.

Tirso Martinez Sanchez testified in December that between 2000 and 2003, he was able to smuggle in 30 to 50 tons of cocaine by welding false compartments into the ends of oil tanker cars. Martinez testified that he and his associates vacuum-sealed cocaine in bags, wrapped them in plastic and rubbed them with mechanic's grease to throw off drug-sniffing dogs.

Martinez Sanchez was arrested in February 2014 and extradited to the United States in December 2015. The following year he pleaded guilty to drug trafficking charges after reaching a cooperation agreement with the government.

Under the cooperation agreement, the government will submit a sentencing letter to the judge and help Martinez Sanchez secure an S visa, a green card issued to witnesses and informants who have assisted law enforcement. He is currently under protective custody and faces a minimum of 10 years to life in prison.

Another method that witnesses testified to using involved fishing boats and other vessels. In fact, Guzman himself is believed to have been intercepted sending messages to a woman, asking her to find someone "willing to go fishing," or, meet a ship filled with drugs hundreds of miles off the coast of the US, and bring the drugs back to shore in a fishing boat.

More recently, cartels have developed "semi-submersibles" -- vessels that look like submarines, but skim the surface of water to avoid detection by the US Coast Guard and other authorities that work to interdict drugs in the ocean.

Guzman led the notorious Sinaloa cartel, described by the US Justice Department as one of the world's most violent and powerful drug cartels. He repeatedly broke out of prison until he was recaptured in January 2016.

Guzman was extradited to the United States and pleaded not guilty to 17 federal charges that include leading a continuing criminal enterprise, firearm violations related to drug trafficking and money laundering.

His trial began in November in a New York federal district court under unprecedented heavy security.

Smuggling drugs through legal ports of entry is risky business. But cartels aimed to curtail their losses by sending through large enough quantities that even if some were seized, others would still make it through.

This mindset was shared in court by former Colombian cartel head Juan Carlos "La Chupeta" Ramirez, who worked with Guzman in the early 1990s and is now in US prison.

Ramirez's cartel would grow, process and send shipments of cocaine to Mexico by plane. Guzman's job was to have the drugs smuggled into the United States.

Once Guzman perfected his methods of smuggling drugs into the United States quickly, through a range of methods, Ramirez said, he couldn't get enough.

"He told me to send him as many planes as I could."

Ramirez is in prison in the United States for drug trafficking. He entered a guilty plea and reached a cooperation agreement.

As part of Ramirez's extradition agreement with Brazil, where he was captured, he is to serve no more than 30 years. But if government attorneys are satisfied with Ramirez's cooperation, they can opt to write a letter to a sentencing judge that could help Ramirez receive less time -- though his cooperation agreement stipulates he may not serve less than 25 years.