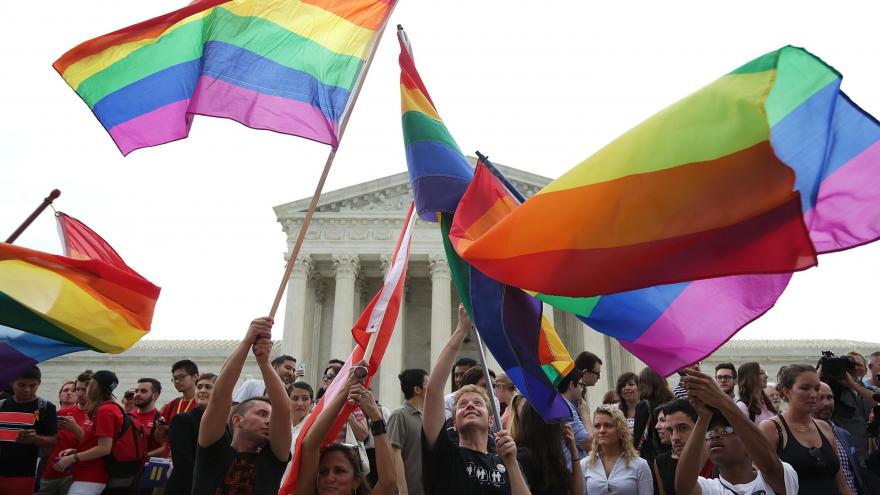 (CNN) -- LGBTQ advocates are warning that the influx of anti-transgender legislation being proposed in many states nationwide could have significant negative repercussions for trans youth.

Twenty-eight states are considering anti-trans bills, according to the the American Civil Liberties Union (ACLU). The bills put forth this year predominantly fall into two categorites: targeting the ability for trans girls and women to participate in school sports, and restricting young trans peoples' access to gender-affirming healthcare.

While many of them may not become law, bills in three states -- Tennessee, Mississippi and Arkansas -- have already been passed and signed by state governors this month.

"This has been a significant part of my work at the ACLU for the past six years and I've never seen anything like this," said Chase Strangio, deputy director for transgender justice at the ACLU. "There have never been this many bills targeting trans youth voted out of committee and then making it to the floor."

Over 60 anti-trans bills are being considered across the country, according to the ACLU. LGBTQ advocates, including Strangio, are concerned that the proposed laws will make it easier to limit trans people's access to health care.

"There have been many existential threats to trans existence, but there's something uniquely dangerous about what's going on right at this moment with the combination of the sports bills and the health care bills," Strangio told CNN. "I think the impulse underlying both is to try to establish governmental policy that it's harmful to be trans."

Last year, Idaho passed a bill banning trans participation in sports -- but the law was blocked by a federal judge over the summer.

"The State has not identified a legitimate interest served by the Act that the preexisting rules in Idaho did not already address, other than an invalid interest of excluding transgender women and girls from women's sports entirely, regardless of their physiological characteristics," Judge David Nye wrote in August of 2020.

This year, however, other states have introduced similar legislation more successfully.

Transgender athletes in Mississippi's public schools and colleges will no longer be allowed to compete in women's sports after the state's Republican governor on March 11 signed the first statewide anti-trans law of 2021.

"This important piece of legislation will ensure that young girls in Mississippi have a fair, level playing field in public schools," Mississippi Gov. Tate Reeves said during the signing event.

The bill states that "a student's gender for purposes of participation in a public middle school or high school interscholastic athletic activity or event be determined by the student's sex at the time of the student's birth, as indicated on the student's original birth certificate."

The law requires a person's gender identity to match their assigned sex at birth. It applies to all sports sponsored by public schools beginning from the elementary level and up through college. Private schools will be held to the same standard if they compete against a public school.

"This law simply says that female athletes should not have to compete in a sport against a student of the male sex when the sport is designed for women's competition." Hutchinson said in a statement after signing the measure into law.

Advocates warn trans health care could also be at risk

Though only legislation around sports bans have been codified into law so far, trans advocates warn that legislation targeting access to health care is approaching passage in some states.

On Monday, the Arkansas Senate will vote on the Arkansas Save Adolescents from Experimentation (SAFE) Act, a measure that would prevent trans people under age 18 from undergoing gender-affirmative treatment. The bill would also allow private insurance companies to refuse coverage to trans people.

For young people experiencing gender dysphoria -- a diagnosis that includes identifying as a gender different than your sex assigned at birth for at least six months -- this would mean not being able to access puberty-blockers, a treatment option for transgender youth that is used to prevent the onset of puberty.

The treatment gives young people and their families time to explore gender identity, according to the American Academy of Pediatrics.

The Arkansas SAFE Act would also ban cross-hormone therapy, a gender-affirming treatment that allows for trans people to masculinize or feminize their physical appearance to be more consistent with their gender identity.

Arkansas State Rep. Robin Lundstrum, who proposed the Arkansas SAFE ACT, has positioned the bill as protective for young people.

"Those kids are precious. Some of them may choose to be transgender when they're older. That's okay, that's their choice," Lundstrum said during a House panel prior to passing the bill. "But when they're under 18, they need to grow up first. That's a big decision, there's no going back."

A dozen states have bills similar to the Arkansas SAFE Act, according to the ACLU's anti-trans bill tracker.

"The psychological aspect of the treatment of gender dysphoria needs to be thoroughly investigated and debated," Emilie Kao, director of the Richard and Helen DeVos Center for Religion & Civil Society at the Heritage Foundation, told CNN, citing a 2011 Swedish study.

"Because the most authoritative studies of those people with gender dysphoria who have gone through surgical intervention show that there is an increase in the level of suicidal ideation after going through surgeries."

But other groups, like the American Psychiatric Association and The American Academy of Pediatrics, have come out against the healthcare bans.

Trans advocates and experts argue that these bills do anything but protect young trans people.

"Affirming health care can literally be life or death for anyone, but particularly for trans youth," Raquel Willis, a Black trans activist and writer, told CNN. "People think that's an exaggeration. It's not. People think you can just discipline identity out of someone and that is not true and in many ways is torture."

Transgender youth have a much greater risk of suicide, according to the US Centers for Disease Control and Prevention. However, if they have access to a puberty blocker, their chances of suicide and mental health problems in the immediate term and down the road decline significantly, a study published in June of 2020 found

Turban, who researches the mental health of transgender youth, said that no surgical intervention is being done on children.

He said the psychological effects of gender dysphoria can be harmful to young trans peoples' bodies.

"We have seen patients with rib fractures from being so dysphoric towards their developing chests that they tightly bind their chests with tape or ace bandages, adolescents who required surgery because their intestines were damaged from not going to the bathroom due to genital dysphoria, and countless patients who had mental health crises related to pubertal progression," Turban said.

"Our recent study in the journal Pediatrics found that those who access pubertal suppression during adolescence have lower odds of considering suicide than those who aren't able to access this intervention. In contrast, our research shows that attempts to force transgender people to be cisgender result in greater odds of suicide attempts."