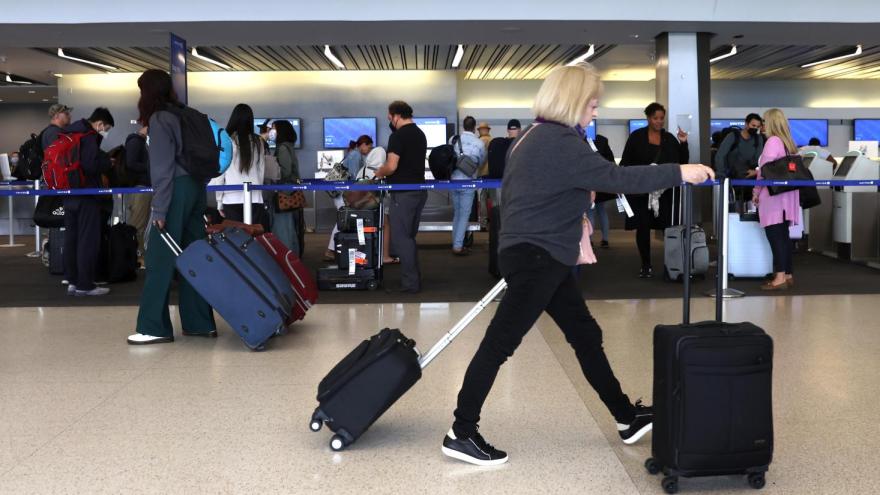 Travelers walk with their luggage at San Francisco International Airport on July 1 in San Francisco, California. The US Department of Transportation has proposed changes to allow airline passengers to seek refunds under circumstances including major delays and Covid-19.

(CNN) -- The US Department of Transportation has proposed changes to allow airline passengers to seek refunds under circumstances including major delays and Covid-19.

The department announced Wednesday proposed changes to federal agency rules that would allow passengers to seek a refund if an airline changes departure or arrival times for a domestic flight by three hours or more, changes the arrival or departure airport, changes or adds connections in a flight itinerary, or changes the type of plane being flown by the airline "if it causes a significant downgrade in the air travel experience or amenities available onboard the flight."

The proposed rules also would expand protections for consumers who are unable to fly for pandemic-related reasons and have nonrefundable tickets, allowing them to receive travel credits or vouchers that do not expire. These consumers could also be eligible for refunds from airlines that received significant government financial assistance.

The announcement comes as the Biden administration aims to crack down on airlines that have been struggling with thousands of cancellations and delays.

For years, Department of Transportation rules have only required airlines to provide passengers a refund if carriers "significantly change" a flight.

The department said Wednesday it has received a "flood" of complaints from passengers seeking refunds from airlines since the outset of the Covid-19 pandemic "because airlines canceled or significantly changed their flights or because the consumers decided not to fly for pandemic-related reasons such as health concerns."

Transportation Secretary Pete Buttigieg said on CNN's "New Day" Thursday that this "rulemaking has been in the works for some time," adding that it would "expand passenger rights."

"We want to make that sure we're being thoughtful. So right now, if you have input on this proposed rule, there is a window to make your voice heard at the Department of Transportation website. And, of course, we're continuing to assess other measures that we can take to improve the passenger experience," he told CNN's John Avlon.

The department will also hold a virtual public hearing on the rule for August 22.

The announcement follows a private meeting that Buttigieg held with airline CEOs in June, during which he told them to fix summer flight schedules that have been crumbling under airline staffing shortages along with bad weather and air traffic control delays. Data from FlightAware shows airlines have canceled roughly 40,000 flights in the US since Memorial Day.

The cancellations and delays led US Democratic Sens. Elizabeth Warren of Massachusetts and Alex Padilla of California to demand the Transportation Department "aggressively" use its authority to hold airlines accountable and protect consumers.

They called on the department to have airlines pay fines and compensate passengers for overbooking flights.