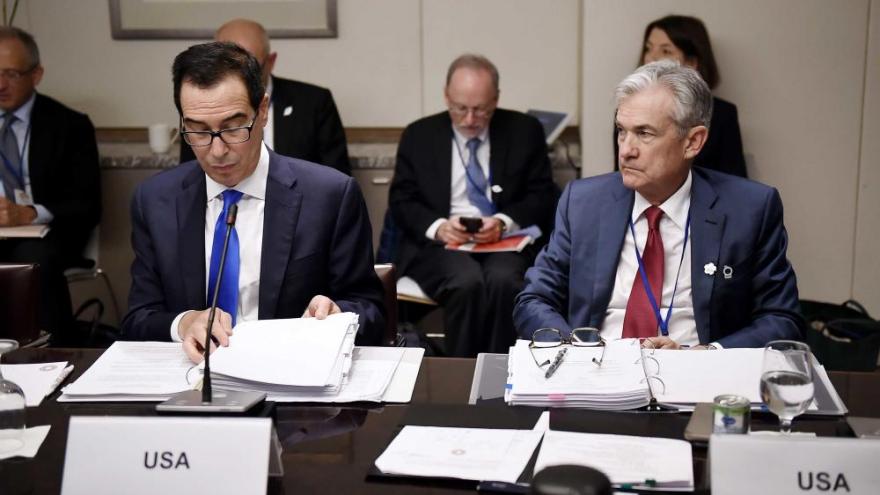 Treasury Secretary Steven Mnuchin (L) and Federal Reserve Board Chairman Jerome Powell attend a meeting between the Finance Ministers and Central Bank Governors of the G7 nations during the IMF and World Bank Fall Meetings on October 17, 2019 in Washington, DC.

(CNN) -- Federal Reserve Chairman Jerome Powell and Treasury Secretary Steven Mnuchin will give their first report on the economic stimulus programs implemented by the $2.2 trillion CARES Act when they testify before the Senate Banking Committee on Tuesday.

The hearing comes on the heels of a report from the new Congressional Oversight Commission that found the Treasury Department has spent little of the $500 billion Congress specifically appropriated for lending to businesses and state and local governments. That includes $46 billion for the airline industry, none of which has been lent so far.

Congress passed the CARES Act aid package about two months ago. It was meant to help support the economy and help people pay their bills as stay-at-home orders shuttered businesses. More than 36 million people have lost their jobs since the middle of March.

Powell and Mnuchin could face questions on the small business lending program, the direct stimulus payments Treasury is sending out to about 150 million Americans, as well as the central bank's Main Street lending program for small and mid-sized businesses.

Lawmakers are currently considering changing some parts of the small business program, known as the Paycheck Protection Program. The loans are forgivable as long as 75% of the money is spent on payroll. But business owners are having trouble bringing workers back before the eight-week deadline. A bill passed by Democrats in the House on Friday would extend the time period to 24 weeks, but the proposal has little chance of passing the Senate.

The Paycheck Protection Program -- which operates on a first-come, first-served basis -- also drew criticism as some large companies received loans while mom-and-pop shops were kept waiting.

Some of them, like Shake Shack and the Los Angeles Lakers, have given the money back.

Mnuchin is expected to tell the Senate committee that 4.2 million small business loans have been made for a total of more than $530 billion, according to his prepared testimony.

He will also say that 140 million stimulus payments have been sent directly to Americans, for a total of $240 billion.