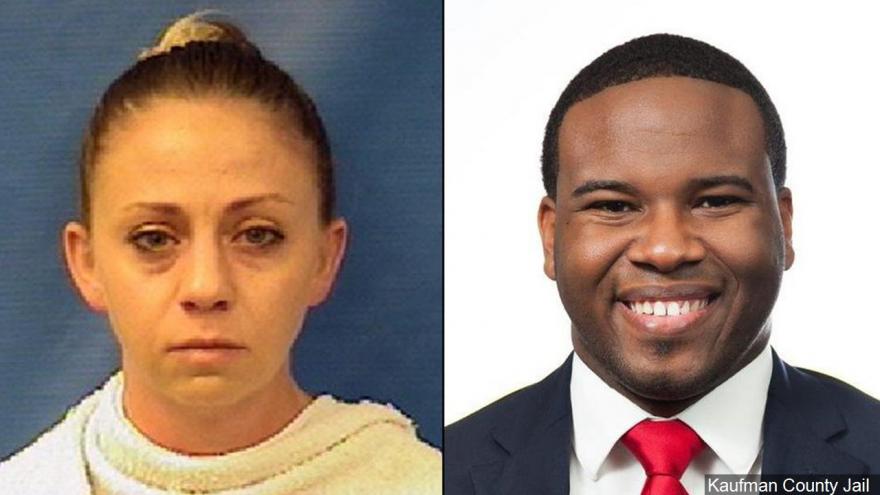 DALLAS (AP) — A white Dallas police officer who fatally shot a black neighbor in his own home was distracted by a phone call with a colleague with whom she had been romantically involved, a prosecutor said Monday at the start of the officer's trial.

Amber Guyger, 31, has said the shooting last year happened after she entered the neighbor's apartment by mistake. She is on trial for the death of 26-year-old Botham Jean, whom she said she mistook for an intruder in her own home. The case is being heard by a jury that appeared to have a majority of women and people of color.

Jean, an accountant from the Caribbean nation of St. Lucia, "was doing no harm to anyone, which was his way," Dallas County Assistant District Attorney Jason Hermus said in an opening statement. He noted that Jean was in his living room eating a bowl of vanilla ice cream when Guyger entered the apartment, which was one floor directly above her apartment.

Guyger's attorneys are likely to argue that she fired in self-defense based on the erroneous belief that she was in her own apartment and that Jean was a burglar.

Hermus said Guyger had worked overtime the day Jean was killed, but said she was mostly doing office work that was not strenuous. He said jurors will see sexually explicit messages that Guyger exchanged that evening with a co-worker that discussed meeting up after her shift ended. He said some messages had been deleted from Guyger's phone after the shooting.

During pretrial proceedings Monday morning, prosecutors and defense attorneys sparred over whether those messages should be entered into evidence.

The case has attracted intense national scrutiny for its strange circumstances and as one in a chain of shootings of unarmed black men by white police officers.

The outcome may hang on whether the jury believes that Guyger's mistake was reasonable, according to legal experts. Twelve jurors and four alternatives were selected to hear the case earlier this month.

Guyger was off duty but still in uniform when she shot Jean. She told investigators that after a 15-hour shift she parked on the fourth floor of her apartment complex's garage — rather than the third floor, where she lived — and found the apartment's door ajar.

Three days after the shooting, Guyger was arrested for manslaughter. She was subsequently fired from the Dallas Police Department and charged by a grand jury .

The jury will have to decide whether Guyger committed murder, a lesser offense such as manslaughter or criminally negligent homicide, or no crime at all.