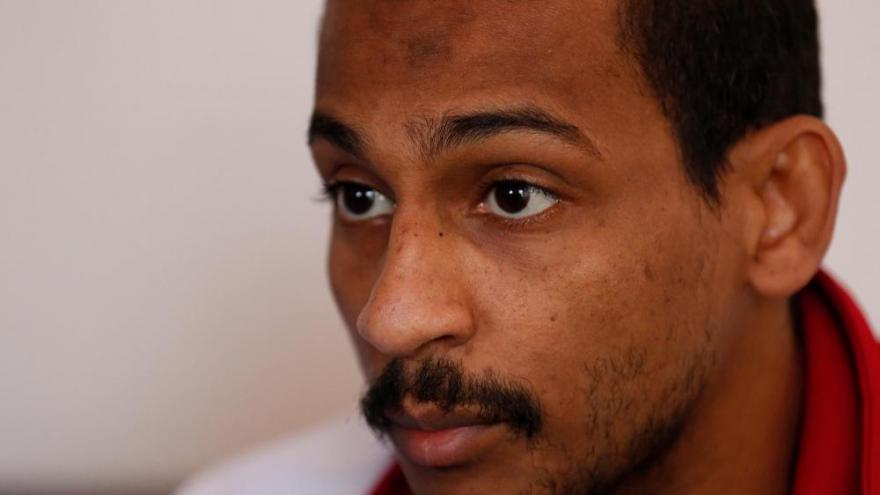 (CNN) -- The trial of an ISIS fighter accused of assisting in the kidnapping, torture and death of several Americans, Europeans and other foreign nationals from 2012 to 2015 began Tuesday in Alexandria, Virginia, with opening statements from each side.

El Shafee Elsheikh, raised in London, is accused of being a member of a group of ISIS militants -- dubbed the "Beatles" by their hostages because of their British accents -- who, according to court documents, traveled from England to Syria in 2012 and joined the terrorist organization.

According to prosecutors, Elsheikh helped take hostages in order to demand the release of ISIS militants in prison or to collect ransom. While some were released, many of the hostages were killed by the group on camera for propaganda films.

Elsheikh, the last alleged member of the terror cell to face trial, has been charged with hostage-taking that resulted in the death of four Americans: journalists James Foley and Steven Sotloff and aid workers Kayla Mueller and Peter Kassig. Elsheikh's co-defendant, Alexanda Kotey, pleaded guilty in September.

Another member of the terror cell, Mohamed Emwazi, who prosecutors say was responsible for many of the beheadings of hostages, was killed in a drone strike in 2015.

During their opening statement, prosecutors outlined the allegations against Elsheikh, foreshadowing the evidence they would present to the jury over the three-to-four-week trial, including interviews with Elsheikh in which they say he confessed to being part of the "Beatles" terror cell, took part in beatings and organized communications with the hostage's families.

"This is a case about the captivity in Syria of four Americans," assistant US attorney John Gibbs said Tuesday, telling jury members that they would hear "horrific testimony" about the hostages' treatment and their ultimate death.

Gibbs told the jury that Elsheikh was captured by the Syrian Democratic Forces in 2018 and was identified after US officials took his fingerprints and ran them through a Department of Justice database. During his time in SDF custody, the FBI as well as media outlets interviewed Elsheikh about his time as an ISIS militant and his role with the hostages.

"He described his role in getting email addresses" for the families, Gibbs said, adding that Elsheikh also said he would partake in the beatings of hostages.

According to prosecutors, the Americans and at least 16 other Western hostages were moved and spread out over at least nine different makeshift prisons throughout Syria, where they were beaten, tortured and, in some cases, eventually murdered.

Gibbs described the brutal decapitations of Foley, Sotloff and Kassig -- filmed by the terror group -- which the government is set to show the jury images of later in the trial. According to Gibbs, Mueller was taken hostage in August 2013 as a slave for ISIS and was repeatedly raped by ISIS leader Abu Bakr al-Baghdadi before she died in what ISIS claims was a Jordanian airstrike.

In his comparatively short opening statement, Edward MacMahon, one of Elsheikh's attorneys, told the jury that while the crimes are "beyond heart breaking and horrific," Elsheikh was not a member of the "Beatles" terror cell but a "simple ISIS fighter."

The evidence is "inconsistent at best," MacMahon said, adding that witness testimony from other hostages of the terror cell will have different versions "of which Beatle is which." According to MacMahon, Elsheikh traveled to Syria to help the people suffering under President Bashar al-Assad and was trying to protect himself and his family when being interviewed by the US government and media outlets.

Family members of the victims were present in the courtroom Tuesday, including Foley's parents and Bethany Haines, the daughter of David Haines -- a British aid worker killed by the group. Bethany Haines and Foley's mother, Diane, along with several other members of the victim's families, took notes throughout the opening statements, sitting still and attentive as each side outlined the forthcoming case.

Elsheikh was also in the courtroom, dressed in a blue, button-down shirt and black glasses, with a mask covering his mouth and part of his beard.

During the trial, the Department of Justice will show the jury propaganda films from ISIS, photos of the deceased victims, letters, email correspondences between families of the victims and ISIS, as well as bring witnesses who were also hostages of the group to testify. One of the witnesses set to testify is a Kurdish woman who was enslaved by ISIS with Mueller.

T.S. Ellis, a judge in the Eastern District of Virginia federal court, is presiding over the trial.