Trial of Jussie Smollett, accused of lying to police about an alleged hate crime, begins Monday with jury selection 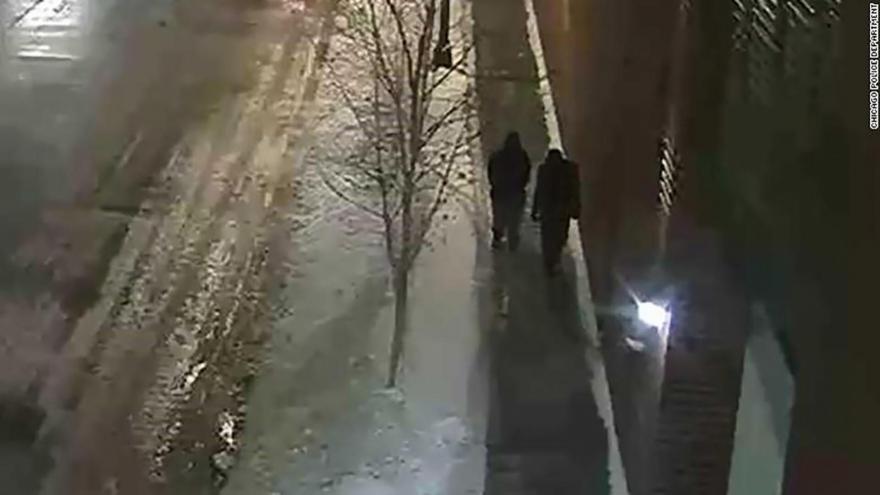 Chicago police in late January 2019 released this surveillance image of two people recorded near the time and location of the reported attack.

(CNN) -- The long road in the Jussie Smollett case finally reaches trial Monday in Chicago, more than two years after police first alleged the actor lied about being the victim of a hate crime and wrongfully diverted weeks of investigative manpower.

The former "Empire" actor, who is Black and gay, has repeatedly denied staging an attack on himself, insisting two men struck him, yelled anti-gay and racist remarks, put a noose around his neck and poured bleach on him on a cold January 2019 night in the Windy City.

Authorities have argued that evidence, including texts and accounts from two Smollett acquaintances, point to Smollett paying the pair to rough him up so he could attract publicity and a career boost -- a narrative Smollett has denied.

Jury selection begins Monday morning for the trial, in which Smollett, 39, is charged with six counts of disorderly conduct on suspicion of making false reports to police. He has pleaded not guilty.

A disorderly conduct charge for a false crime report is a Class 4 felony in Illinois, punishable by up to three years in prison and a $25,000 fine. A judge would determine whether convictions on multiple counts would yield sentences that run concurrently or consecutively.

It once looked like this case wasn't going to trial. The Cook County State's Attorney's Office unexpectedly dropped Smollett's first set of charges -- also disorderly conduct -- in March 2019 after he performed community service and agreed to forfeit $10,000 bond that he paid.

But that set off debate over whether Smollett had received preferential treatment, leading a judge to appoint a special prosecutor, former US Attorney Dan K. Webb, to look into it in August 2019.

That led to a second grand jury, which in February 2020 indicted Smollett on the current charges. Smollett's attorneys tried to dismiss the case on grounds this was double jeopardy -- but Cook County Judge James Linn rejected this, because Smollett hadn't been tried.

The trial begins to wrap a case that captivated a nation for weeks in pre-pandemic times, and has been anything but a boon to Smollett's acting career.

After friends and fans and Hollywood rallied around Smollett, horrified that anyone would so brazenly attack him, that support shrank and many turned on him when police alleged he staged it. Smollett's character was written out of the Fox drama "Empire," and though he has since directed and produced a film, he's yet to appear in another TV or film acting role.

The staging allegations also led some to lament that it might unfairly cast doubt on future victims of hate crimes.

How the case unfolded

Smollett told police that two men attacked him outside, near his Chicago apartment, around 2 a.m. on January 29, 2019, as he was walking back from a Subway sandwich shop, authorities said.

Smollett, who played a gay character on "Empire," said the attackers yelled, "'Empire' fa***t'" and " 'Empire' n***er," while striking him, police said. The incident ended with a noose around his neck and bleach poured on him, police said.

The actor said one of the men shouted, "This is MAGA country," a reference to then-President Donald Trump's "Make America Great Again" slogan, according to police.

Police initially investigated the case as a possible hate crime. Chicago police body camera footage shows officers speaking with Smollett that day: As officers enter his apartment, he's seen wearing a sweater with a white rope tied in a noose around his neck.

Police reviewed video from numerous city and private sector surveillance cameras. None captured the alleged attack itself -- but investigators focused on footage of two people in the area at the time of the reported incident.

Tracing their steps in reverse, investigators tracked them to a cab ride, and then a rideshare car. A check on that rideshare order ultimately led police to identify the men as brothers Olabinjo and Abimbola Osundairo, authorities said.

The brothers flew to Nigeria hours after the alleged attack. When they flew back to Chicago on February 13, 2019, investigators met them at customs when they returned, authorities said.

After police detained and interviewed the Osundairo brothers, authorities said they were getting a different idea about the case. On February 21, 2019, Chicago's then-police superintendent Eddie Johnson announced that Smollett was being charged, saying that Smollett knew the men and paid them to stage the attack.

The brothers, who police said had been extras on "Empire," were released without being charged and testified before a grand jury.

Johnson laid out a series of allegations, including that, days before the assault, Smollett first "attempted to gain attention by sending a false letter" to the "Empire" set "that relied on racial, homophobic and political language." It contained white powder and a drawing of a "stick figure hanging from a tree," police have said.

According to prosecutors that month, Smollett told one of the brothers that he was disappointed in the "Empire" team's reaction to the letter.

So, Smollett paid the brothers $3,500 to attack him, to take "advantage of the pain and anger of racism to promote his career," Johnson alleged when announcing the initial charges.

To bolster their case, authorities cited text messages and records of phone calls between the parties. The alleged plot's electronic trail dated to January 25, 2019, when Smollett texted Abimbola Osundairo and said, "Might need your help on the low. You around to talk face to face?" prosecutors alleged.

Smollett took the brothers to near the site of the purported attack, and they rehearsed it, before Smollett gave the brothers a $100 bill to buy clothing and rope for a noose, prosecutors alleged.

Phone records indicated Smollett talked to the brothers about an hour before the alleged attack, an hour afterward, and after they left the country for Nigeria, authorities said.

Smollett had wanted to draw attention to himself partly he was "dissatisfied with his salary," Johnson alleged.

In March 2019, Smollett attorney Patricia Brown Holmes said Smollett did pay the brothers, but only for "nutrition and training."

"They were his trainers," she said.

Smollett was indicted the first time -- on 16 counts of disorderly conduct -- in March 2019 and pleaded not guilty.

The case's lead prosecutor at the time, Joseph Magats, said his team considered Smollett's volunteer service in the community and willingness to forfeit his $10,000 bond. He also noted that Smollett had no prior felonies and wasn't a danger to the community -- but he told CNN affiliate WLS that that didn't mean Smollett was exonerated.

"We believe he did what he was charged with doing," Magats told WLS.

The day charges were dropped, Smollett's attorneys released a statement saying the actor was "a victim who was vilified and made to appear as a perpetrator as a result of false and inappropriate remarks made to the public, causing an inappropriate rush to judgment."

"This entire situation is a reminder that there should never be an attempt to prove a case in the court of public opinion," the statement reads. "That is wrong. It is a reminder that a victim, in this case Jussie, deserves dignity and respect."

"This is without a doubt a whitewash of justice and sends a clear message that if you're in a position of influence and power, you'll get treated one way. Other people will be treated another way," Emanuel said in March 2019.

Latest set of charges filed after special prosecutor steps in

A retired Illinois appellate court judge eventually initiated a petition to appoint a special prosecutor to check how the Cook County prosecutors handled the case, and to decide whether Smollett should still be prosecuted.

A Chicago judge appointed Webb as special prosecutor in August 2019. Webb took the case to a second grand jury, which indicted Smollett with the latest charges in February 2020.

At the time, Smollett attorney Tina Glandian said the special prosecutor "has not found any evidence of wrongdoing whatsoever related to the dismissal of the (first set of) charges against Mr. Smollett."

"Rather, the charges were appropriately dismissed the first time because they were not supported by the evidence," Glandian said.

Webb said the second grand jury's investigation "revealed that Jussie Smollett planned and participated in a staged hate crime attack, and thereafter made numerous false statements to Chicago Police Department officers on multiple occasions, reporting a heinous hate crime that he, in fact, knew had not occurred."

He decided to prosecute Smollett for several reasons, "including the extensive nature of Mr. Smollett's false police reports, and the resources expended by the Chicago Police Department to investigate these false reports," Webb said in a prepared statement in February 2020.

Gloria Schmidt Rodriguez, who represented the Osundairo brothers, has said the brothers were sorry for their role, and would "continue to cooperate with" a process of helping the public know the truth.

Webb's office also released a report in August 2020 saying there was evidence that county prosecutors had abused their discretion in dropping Smollett's first charges, but also that there was no evidence supporting criminal charges against them.

Foxx's office released a statement that month saying Webb's findings put "to rest any implications of outside influence or criminal activity on the part of the Cook County State's Attorney's Office." The statement also said Foxx's office categorically rejected Webb's "characterizations of its exercises of prosecutorial discretion and private or public statements as 'abuses of discretion.' "