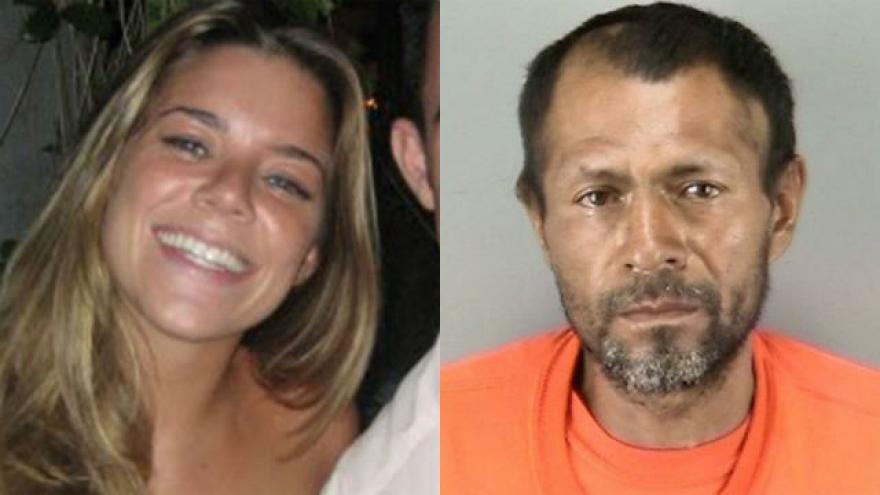 The video may have been grainy and captured from a great distance, but prosecutors said the image was unmistakable: 32-year-old Kate Steinle had just been shot on San Francisco\'s Pier 14, a popular tourist spot. Soon it will be up to the jury to decide whether the man on trial unintentionally shot her or committed murder. Photo courtesy Facebook/SFPD

(CNN) -- Jurors failed to reach a verdict Tuesday after the first day of deliberation in the trial of Jose Ines Garcia Zarate. His alleged murder in 2015 of Kate Steinle became a rallying point in a national debate over immigration policy.

Garcia Zarate, a 45-year-old Mexican citizen and undocumented immigrant, is charged with second-degree murder in the killing of Steinle.

Prosecutors said Garcia Zarate was playing his own "secret version of Russian roulette" when he deliberately fired into an unsuspecting crowd on a San Francisco pier, killing Steinle.

But defense attorneys argued that Garcia Zarate found the 40-caliber Sig Sauer pistol, which then went off accidentally. The bullet ricocheted off the ground and traveled about 80 feet before striking Steinle, attorney Matt Gonzalez said.

"But for the ricochet, it does not hit her," Gonzalez told jurors during closing arguments.

The undocumented status of the defendant and San Francisco's status as a "sanctuary city" brought the murder trial into the larger political debate on immigration policies.

Donald Trump mentioned Steinle's case on the campaign trail as part of his argument for a stricter approach to immigration policy.

"This senseless and totally preventable act of violence committed by an illegal immigrant is yet another example of why we must secure our border immediately," Trump said in a statement in July 2015. "This is an absolutely disgraceful situation and I am the only one that can fix it. Nobody else has the guts to even talk about it. That won't happen if I become President."

In June, the House of Representatives passed "Kate's Law," a bill that would create harsher penalties for repeat illegal entry to the United States and would expand US law to pressure local cities to cooperate with federal immigration enforcement.

Defense attorneys positioned the shooting as a tragic accident and said Garcia Zarate picked up an object wrapped in a cloth or T-shirt.

"He didn't know the contents and a bullet was fired. He had no intent to hurt anyone," attorney Gonzalez said.

In a police interview, Garcia Zarate admitted to firing the gun, but he said he was aiming at a seal. He also told police he had never shot a gun before.

However, prosecutors said he attempted to cover his tracks by throwing the weapon into the San Francisco Bay and fleeing the scene. Prosecutors said the argument that the gun was found wrapped in cloth was "fiction," and that no cloth was found on the pier.

"It's clear he wanted to fire the gun at people. You know that this gun just doesn't go off," lead prosecutor Diana Garcia said. "There's no reason why this gun would have gone off, other than this defendant pulling the trigger."

There was a "conscious disregard for everyone" on the pier, she added.

"We'll never know why, but we know he did it. All the evidence shows you this."