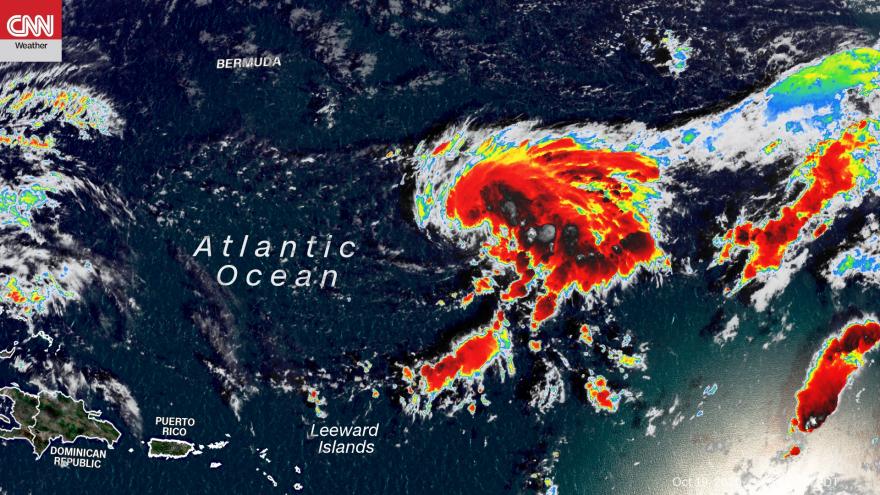 Tropical Depression 27 has been upgraded to Tropical Storm Epsilon with winds of 40 mph, according to the National Hurricane Center. Credit: CNN Weather
By Douglas S. Wood, CNN

(CNN) -- Tropical Depression 27 has been upgraded to Tropical Storm Epsilon with winds of 40 mph, according to the National Hurricane Center.

Epsilon is forecast to strengthen over the next several days as it moves slowly towards the northwest, and is expected to reach hurricane strength early Thursday, according to the center's latest advisory.

Epsilon could threaten Bermuda, as it makes its closest pass on Friday into Saturday. The storm is currently 735 miles south of the island.

The storm is currently stationary and little overall movement is expected through Monday evening, according to the center.

The center's forecasters say the storm should begin a slow, west-northwestward to northwestward movement on Tuesday, and this motion should continue through midweek.

The storm formed in the Atlantic Ocean southeast of Bermuda earlier on Monday, according to the center.

Epsilon is the 26th named storm of the 2020 Atlantic hurricane season, which is on the verge of becoming the most active since 2005. There were 28 storms in 2005, including destructive Hurricanes Katrina, Rita and Wilma. That year was also the first time the normal list of storm names was exhausted, prompting the use of names beginning with letters from the Greek alphabet.