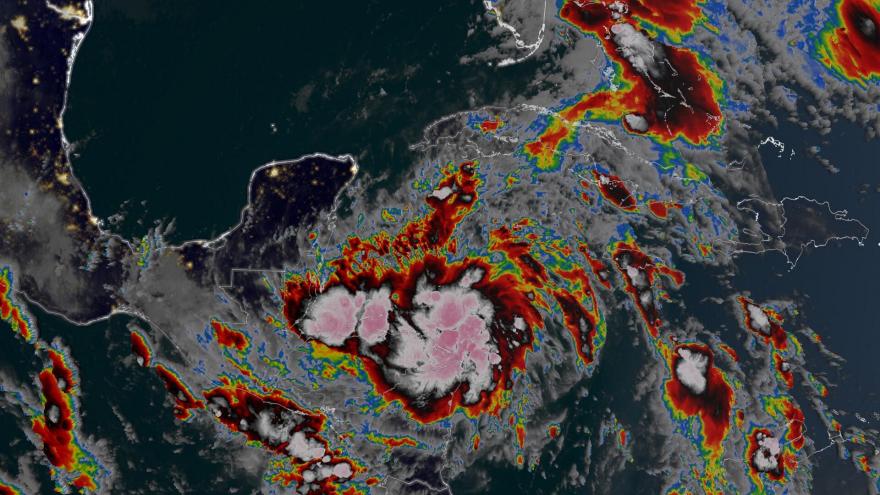 A satellite iamge of Tropical storm Zeta on Sunday morning

(CNN) -- A tropical depression east of Mexico strengthened Sunday morning into Tropical Storm Zeta and could reach the US Gulf Coast by midweek.

Zeta could be at or near hurricane strength when it approaches the northern Gulf Coast on Wednesday, and could bring storm surge, rainfall, and wind impacts to areas from Louisiana to the Florida Panhandle.

It is the 27th named storm of the 2020 Atlantic Hurricane season, tying a record set in 2005 for named storms, according to the National Weather Service.

If it makes landfall in Louisiana, Zeta would become the fifth named storm to do so this year, setting a record.

Zeta on Sunday morning had sustained winds of 40 mph and was moving north at only 1 mph. The storm was about 295 miles southeast of Cozumel.

It is forecast to strengthen and to become a hurricane by early Tuesday.

Zeta is forecast to make landfall Wednesday between central Louisiana to the Florida Panhandle as a strong tropical storm.

"While the current NHC forecast indicates that the system should weaken below hurricane strength before landfall, users are reminded that strong tropical storms can still produce significant storm surge, rainfall, and wind impacts along the northern Gulf Coast" the National Hurricane Center said Sunday.

"As we've seen this hurricane season, a tropical threat during the ongoing COVID-19 emergency is challenging, but something we can handle," Edwards said in a tweet.

"We must roll up our sleeves, like we always do, and prepare for a potential impact to Louisiana," Edwards said.

Zeta could be near or at hurricane strength when it approaches the Yucatan state in Mexico by late Monday morning.

A dangerous storm surge will raise water levels by as much as 1 to 3 feet above normal tide levels along the immediate coast in the Hurricane Watch area near and to the north of where the center makes landfall in the Yucatan Peninsula.

Could set record for Louisiana storms

If Zeta makes landfall in Louisiana, it would be the fifth named storm to do so this season. That would be a new record for that state for the most landfalls in a season.

The previous landfalls were Cristobal, Laura, Marco, and Delta.

Also, it would tie the record for most landfalls in any state for a season (Florida in 2005).

These stats only count for one landfall per storm per state.

Zeta also would be the 11th named storm to make landfall in the continental US this season, which is the most in one year. Previous storms were Bertha, Cristobal, Fay, Hanna, Isaias, Laura, Marco, Sally, Beta and Delta.

It is unusual for multiple storms to hit the same spot in the same season, but it happens.

For instance, Frances and Jeanne both hit the southern end of Hutchinson Island in Florida in 2004. Harvey hit Louisiana in 2017 relatively close to where Cindy had come ashore.

Two storms have made landfall within 30 miles of each other, including Hermine and Colin in 2016 in Florida, Ike and Edouard in 2008 in Texas, and Katrina and Cindy in 2005 in Louisiana.