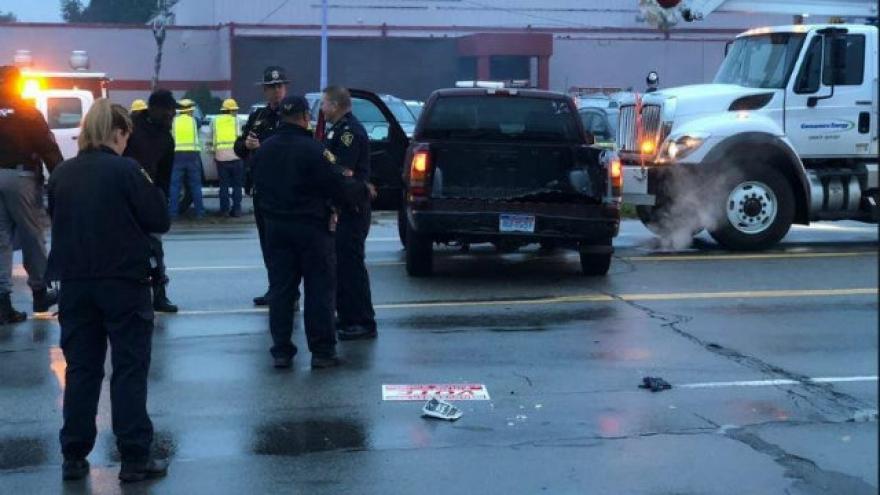 A truck plowed into a crowd of protesters, including the Democratic gubernatorial candidate and Flint mayor, outside a Flint restaurant. Photo courtesy WJRT

DETROIT (AP) — Several people were injured before dawn Tuesday when a pickup truck collided with a group of protesters calling for higher pay and the right to form unions in Michigan, in what police said appeared to be an accident.

Police Chief Tim Johnson said he doesn't believe the crash near a fast-food restaurant in Flint was intentional and that the driver "seemed pretty shaken up" afterward. Johnson initially said four or five people had non-life-threatening injuries, but later said eight were hospitalized.

"We just came from the hospital. Several people were getting released," Service Employees International Union President Mary Kay Henry told The Associated Press a few hours after the protest. "Three still are being observed."

Michigan Democratic gubernatorial candidate Gretchen Whitmer was among those participating in the protest. She wasn't injured and a post on her Twitter account says she's "incredibly sad that so many people were hurt." Whitmer and Michigan Attorney General Bill Schuette, a Republican, are battling for governor.

The protests are part of an effort to elect pro-union candidates in the November general election. Walkouts are planned in Milwaukee on Wednesday and Chicago on Thursday. On Thursday, higher education workers are expected to join fast food workers in a protest in Miami, Henry said.

The protesters had been walking along the street in the dark when some were struck. Johnson said the driver "acted like he didn't see them."

The protest was organized by Fight for $15, a national movement seeking to increase the minimum wage to $15 an hour for fast food, child care, airlines and other workers. The group also wants the right to start unions or join existing ones.

Michigan's Republican-led Legislature voted last month to gradually increase the state's $9.25 minimum wage to $12 by 2022 — keeping the initiative from the November ballot — but lawmakers could water down the law after the election.

Officeholders and those seeking election in November who are taking part in the protests "understand that there are too many overworked and underpaid Americans," said Henry.

And those workers are taking action after seeing minimum wages rise elsewhere. Henry said change can come at the ballot box.

"We are losing patience with an economy that continues to leave us out," she said.