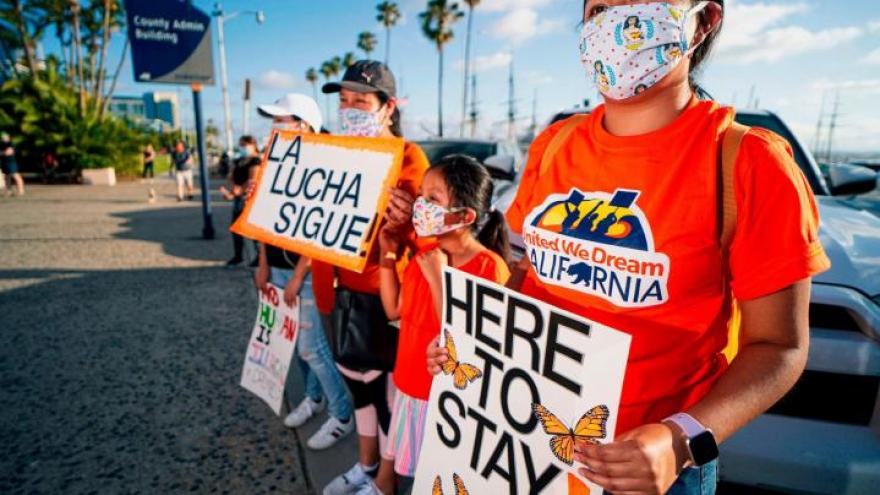 People hold signs during a rally in support of the Supreme Court's ruling in favor of the Deferred Action for Childhood Arrivals (DACA) program, in San Diego, California.

(CNN) -- After nearly three years of uncertainty, young undocumented immigrants received some reprieve from the Supreme Court Thursday, but President Donald Trump is ready to throw them into legal limbo yet again.

In a 5-4 ruling Thursday, the Supreme Court blocked the Trump administration's attempt to end an Obama-era program that protects undocumented immigrants who came to the US as children from deportation and allows them to work in the US. Trump had pledged to end the so-called Deferred Action for Childhood Arrivals program during his campaign and moved to do so in 2017.

Trump seems prepared to go down that path again. The core question before the Supreme Court was how the administration ended the program, not its legality. Chief Justice John Roberts took issue with the manner in which Trump tried to terminate DACA but left open the possibility for the administration to take another swing at it.

Later in the day, White House press secretary Kayleigh McEnany confirmed the White House is looking for a way forward. "We're looking at documents currently and we're going to move forward in a responsible way and cure some of the remedies and the unlawfulness that we see with the previous memo that brought DACA into place," she said.

The administration could reissue memos dismantling the program, like it did in 2017, but officials would have to prove that the process wasn't rushed and that all considerations were taken into account. Any new attempts would likely face legal challenges.

Meanwhile, a lawsuit brought by the state of Texas, which seeks to block DACA, is back in play after being put on hold pending the Supreme Court's decision. Hours after Thursday's ruling, US District Court Judge Andrew Hanen asked to hear from both the parties by mid-July. The case could also throw a wrench in how the administration proceeds.

Still, immigration hardliners are anticipating Trump will take another shot at ending DACA.

"This was a campaign promise and this is something he started, and the Supreme Court just said he could do it, so to just fold over and say it's too hard, that's just not going to happen. That's not leadership," said Jessica Vaughan, director of policy studies at the Center for Immigration Studies, a group that supports reduced immigration. "Even if it's legal, it's not good policy."

Others find the move disheartening.

"We're in the middle of this global pandemic, very serious issues that we're grappling with in terms of race and equality in this country and this is totally unnecessary," said Jorge Loweree, director of policy at the American Immigration Council. "It's a distraction. Our energy and effort is better dedicated to other things."

In the meantime, the Trump administration needs to grapple with Thursday's ruling and its implementation.

Ur Jaddou, director of DHS Watch, said that US Citizenship and Immigration Services, which is charged with processing applications, would review and interpret the decision upon receiving it to determine next steps. "It doesn't surprise me they're going slow, they're probably going to say we have to think about what this exactly means and how we operationally get it done," Jaddou, who previously served as USCIS chief counsel, said.

Jaddou and other immigration lawyers have said the ruling leaves the door open to new applications, which has not been allowed during litigation. Only renewals were being accepted.

USCIS has not yet clarified whether that's the case despite multiple requests for comment.

If that's the case, however, Jaddou argues it shouldn't be difficult to implement. "It's not like they're being ordered to do something new and different," she said. "They already know how to accept initial applications. The process is there. It's in place and they exercised it for years."

Hundreds of thousands of immigrants are estimated to be eligible for DACA but have been unable to join since initial applications were halted.

It's unclear, however, how many of those who are eligible to apply will decide to do so, given that they'd have to provide identifying information. That was a concern even during the Obama administration, since many DACA recipients live in mixed-status households, meaning some family members may be undocumented and others may be US citizens.

Over Trump's presidency, there's been a lack of trust between the immigrant community and the Trump administration amid a slew of policies designed to crack down on immigration. The President's tweet about a possible second attempt could also fuel hesitation.

Congress is the only body that can provide a permanent solution for DACA recipients through legislation. Last year, the House of Representatives introduced and passed the "Dream and Promise Act" that would, in part, provide a pathway to citizenship for beneficiaries of the DACA program. The Senate has not taken it up.

For years, Democratic and Republican lawmakers have tried -- and failed -- to pass legislation addressing this slice of the undocumented population.

In 2001, Sens. Orrin Hatch, a Republican from Utah, and Dick Durbin, a Democrat from Illinois, introduced the "Development, Relief, and Education for Alien Minors Act," also known as the DREAM Act. It sought to provide young undocumented immigrants a pathway to legal status and earned the group of undocumented immigrants brought to the US as children the moniker "Dreamers."

Since then, there have been several iterations of the measure that -- while different to some degree -- seek to put the group on a path toward legal status. But the give and take between Democrats and Republicans over "Dreamers" has made it difficult to achieve a bipartisan compromise.

"There's a reason why we haven't had this resolved in many years," Vaughan said. "It's because it's tough and there are great differences of opinion on it and the difference between both sides has only gotten more hardened in recent years."

Democrats have signaled they're unwilling to negotiate on policies that could put the undocumented families of DACA recipients at risk -- leaving little wiggle room for resolve.

"I think Congress knows it needs to do something but obviously with this administration, having tried to pass legislation, people know it's an uphill battle," said Kerri Talbot, director of federal advocacy at Immigration Hub.

A stalemate on how to move forward in the halls of Congress and lack of clarity on the administration's next moves leaves the future of hundreds of thousands of DACA recipients in limbo.