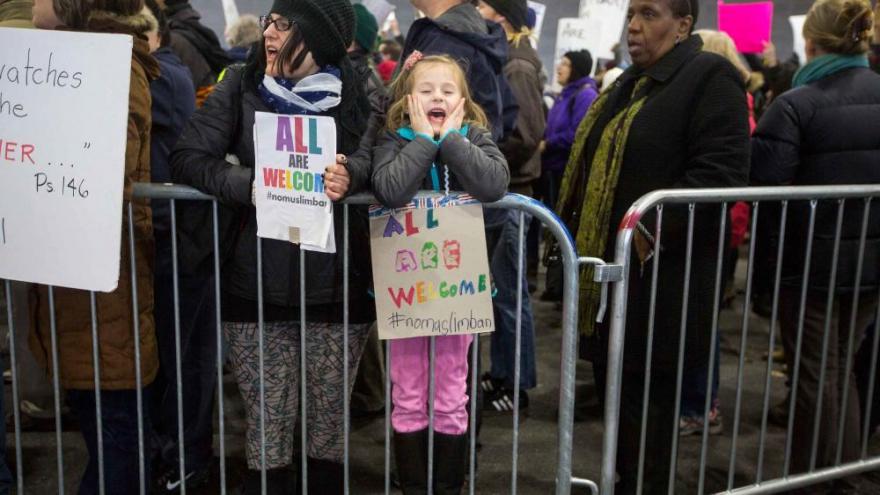 The Trump administration is expected to announce an expansion of the travel ban, a revision of one of the President's signature policies, which has been derided by critics as an attempt to ban Muslims from the US, according to sources familiar with the updated restrictions. Pictured here, demonstrators at Philadelphia International Airport protest against the travel ban on January 29, 2017.

(CNN) -- The Trump administration on Friday announced an expansion of the travel ban -- one of the President's signature policies, which has been derided by critics as an attempt to ban Muslims from the US -- to include six new countries.

Immigration restrictions will be imposed on: Nigeria, Eritrea, Tanzania, Sudan, Kyrgyzstan and Myanmar (known as Burma), with exceptions for immigrants who have helped the US.

The latest iteration comes three years after President Donald Trump -- in one of his first moves in office -- signed the first travel ban, which caused chaos at airports and eventually landed at the Supreme Court. The announcement also comes at the end of a major week for Trump with the signing of the USMCA trade deal and expected acquittal in the Senate impeachment trial.

The updated ban has already sparked controversy over its targeting of African countries with lawmakers and advocates calling the changes discriminatory and without merit.

The administration has argued that the travel ban is vital to national security and ensures countries meet US security needs, by requiring a certain level of identity management and information sharing requirements.

In 2018, the Supreme Court upheld the third version of the travel ban after the previous iterations were challenged in court. The current policy restricts entry from seven countries to varying degrees: Iran, Libya, Somalia, Syria and Yemen, along with Venezuela and North Korea.

Restrictions on those countries will remain in place, the official said. Chad was removed from the list last April after the White House said the country improved security measures.

Unlike the original ban, the new restrictions only include categories of immigration visa applicants. Specifically, all immigrants from Burma, Eritrea, Kyrgyzstan and Nigeria will be banned from the US. However, only green card lotteries will be restricted from Sudan and Tanzania, said a DHS official Friday.

Based on 2018 data, an estimated 12,398 people could be impacted by the new ban, according to the official. The restrictions apply to immigrant visas, but not students, other temporary visitors or refugee processing.

The proclamation, signed by President Donald Trump Friday, is expected to take effect on February 21.

"Travelers on their way to the United States will not be denied entry as a result of this proclamation," said the official. Nationals of the six countries already in the US or those with a valid visa to come to the US will "not be impacted," the official added.

According to the administration, the US decided to focus on immigrant visas for two reasons: these six countries have a "greater prospect" for improvement, additionally it is more challenging to deport someone who has emigrated to the US, rather than a tourist or visitor.

The official acknowledged that gaps and vulnerabilities could have an impact on all travelers to the US, but said that "we prioritized the initial focus on those categories that could have the greatest long term challenge." The administration did "not feel it would be proportionate to impose travel restrictions" on all travelers, the official said.

Immigrant groups derided the expansion of the program.

"The ban should be ended, not expanded. President Trump is doubling down on his signature anti-Muslim policy -- and using the ban as a way to put even more of his prejudices into practice by excluding more communities of color," ACLU's director of its Immigrants' Rights Project, Omar Jadwat, responded in a statement.

On a call with reporters Friday afternoon, Rep. Sheila Jackson Lee, D-Texas, and Rep. Joe Neguse, D-Colorado, criticized the latest incarnation of the ban in anticipation of its expansion. "It's pure discrimination and racism," Jackson Lee said.

Neguse said he has a personal connection with the news.

"I'm the son of immigrants. My parents are Eritrean Americans. They were born in Eritrea. They came to the United States as refugees nearly 40 years ago. Their ability to do that offered me and family tremendous freedoms and opportunities," he said.

Director of Immigration Studies Alex Nowrasteh at the libertarian Cato Institute said there is no national security justification for banning immigrants from these countries.

"The annual chance of being murdered by a foreign‐​born terrorist from those six countries on US soil is about 1 in 1.9 billion per year," he said in a statement.

The revisions also come as the US is grappling with how to handle the coronavirus outbreak. On Friday, the administration also announced it will deny entry to foreign nationals who have traveled in China in the last 14 days -- unrelated to the immigration restrictions.

DHS and other departments evaluate each countries compliance with the criteria, as well as risk of travel to the US from terrorists and criminals. "We are intrinsically more concerned" about the risk of terrorists traveling to the US, said the official.

The criteria desired by the US includes, electronic passports, reporting of loss or thefts of passports, sharing information to validate travelers and sharing share information on known or suspected terrorists and criminals, the official said.

For example, Burma's tracking of lost and stolen passports is "behind most of the world" and Eritrea doesn't meet the threshold for criminal and terrorist information sharing, said the official regarding examples of specific country issues. Although Nigeria does work with the US on counter terrorism issues, said the official, its identity management capabilities and reporting to Interpol could use "quite a bit of improvement."

Any country on either ban can have their restrictions removed at anytime by fixing the deficiencies, according to the DHS official, pointing to Chad being removed from the list for making improvements on lost and stolen passport reporting and deepened exchange of terrorist information.

In October, CNN reported that Trump administration officials were discussing adding more countries to the travel ban list, two sources said. At the time, fewer than five countries were under consideration, an official said. At one point, seven countries were under consideration. The goal, the official said, is to "bring governments into compliance by using the power of access to the United States."

Democratic lawmakers have continued to denounce the ban and pushed back against the administration's argument that the ban was for national security purposes.

Last year, Democrats introduced a bill known as the "No Ban Act" in the House and Senate to overturn the ban, but the measure is not expected to pass the GOP-controlled Senate.

This story has been updated with additional details of the travel ban.

CORRECTION: This story has been updated to correct the date that the travel ban goes into effect.