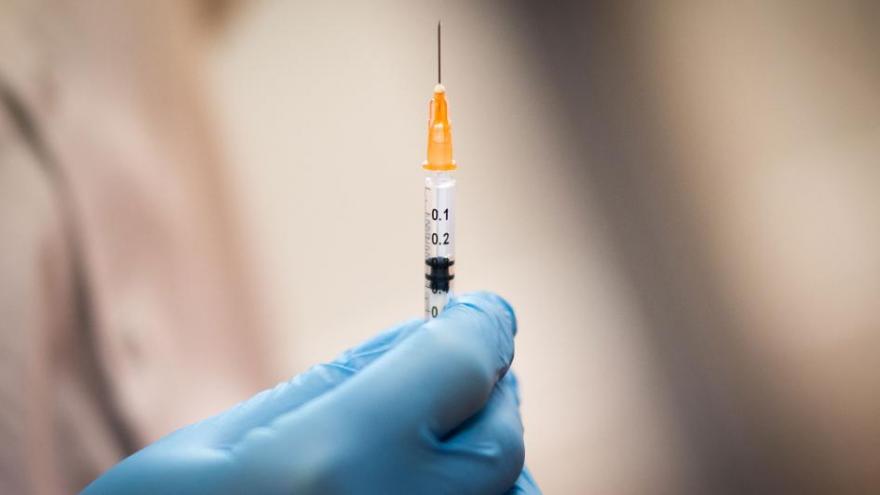 The Trump administration is expected to change its course on the vaccine distribution. Pictured here, a nurse prepares a syringe with a dose of the Pfizer-BioNTech Covid-19 vaccine on January 7, 2021, in Vannes, France.

(CNN) -- The Department of Health and Human Services is expected to announce sweeping changes Tuesday in vaccine rollout guidelines in an effort to boost the lagging number of vaccinations in the first month.

The Trump administration plans to release reserved second doses immediately, a senior administration official tells CNN -- a plan already announced by President-elect Joe Biden that was first reported by CNN. The official expects reserved doses to be distributed over the next two weeks.

The new plan would also change guidelines to allow vaccinations immediately for anyone older than 65 and would help states set up mass vaccination sites should they request assistance. The administration wants to shift focus away from hospitals and focus more on adding more accessible venues, such as pharmacies, the source said.

This will attempt to address a reoccurring issue states have faced in trying to administer the vaccine through hospitals and medical providers that have said they don't have the resources or personnel to serve as vaccination clinics.

The change in guidelines, which is expected to be announced at a noon briefing Tuesday by Operation Warp Speed, is a significant shift from the approach taken by the Trump administration which had previously balked at releasing all available doses. Both Pfizer/BioNTech and Moderna's vaccines require two rounds of injection, and while releasing nearly all vaccine doses on hand could quickly ratchet up availability, it also runs the risk of depleting resources that are necessary to make sure people are fully vaccinated.

The changes come after two Operation Warp Speed meetings held by HHS Secretary Alex Azar over the past 48 hours about how to speed up the lagging process, according to the official. Vaccine manufacturing has not ramped up as rapidly as many experts had hoped.

Appearing on ABC's "Good Morning America" Tuesday morning, Azar downplayed the significance of the shift, calling it "just a staging, moving to the next phase on the vaccine program."

But as recently as last week, Operation Warp Speed pushed back on the Biden team's plan to release all doses now.

"If President-Elect Biden is calling for the distribution of vaccines knowing that there would not be a second dose available, that decision is without science or data and is contrary to the FDA's approved label," OWS spokesman Michael Pratt said Friday in light of Biden's announcement. "If President-elect Biden is suggesting that the maximum number of doses should be made available, consistent with ensuring that a second dose of vaccine will be there when the patient shows up, then that is already happening."

Last week, two top officials from the FDA said anyone who receives those vaccines needs both doses, dismissing the idea of stretching the supply by allowing just one dose or cutting doses in half.

They also dismissed other ideas for stretching the vaccine supply and said people who are speculating about the possibility of making do with just one dose or cutting doses in half are misinterpreting the data.

"We have been following the discussions and news reports about reducing the number of doses, extending the length of time between doses, changing the dose (half-dose), or mixing and matching vaccines in order to immunize more people against COVID-19," FDA Commissioner Dr. Stephen Hahn and Dr. Peter Marks, who heads FDA's vaccine division, said in a statement at the time.

Nearly 9 million people have received their first doses of vaccine and nearly 25.5 million doses of vaccine have now been distributed, the US Centers for Disease Control and Prevention said Monday. But that's far behind initial administration estimates, which at one point predicted 20 million Americans would be vaccinated by the end of 2020.

Meanwhile, the coronavirus is surging across the United States. More than 200,000 new Covid-19 cases have been reported every single day over the past week, according to Johns Hopkins University, and the US has averaged more than 3,200 reported deaths each day over that period.