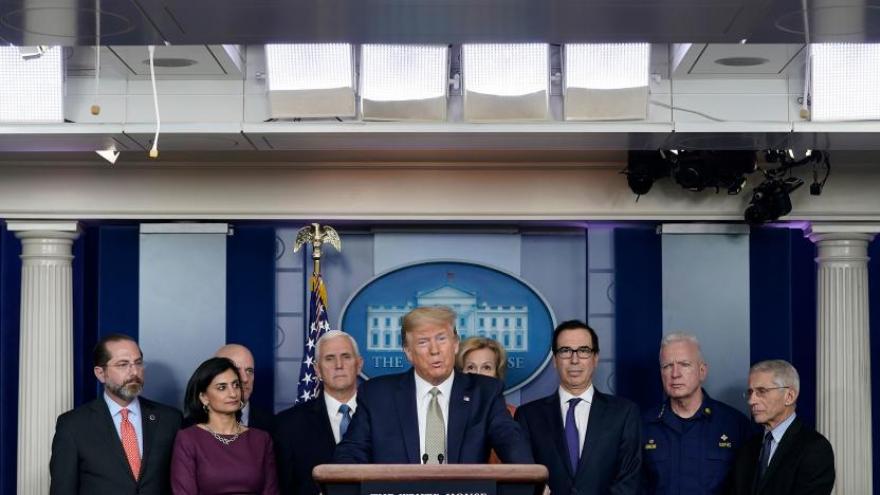 U.S. President Donald Trump, joined by members of the Coronavirus Task Force, speaks about the coronavirus in the press briefing room at the White House on March 17, 2020 in Washington, DC. The Trump administration is considering an $850 billion stimulus package to counter the economic fallout as the coronavirus spreads.

(CNN) -- President Donald Trump on Tuesday laid out new efforts his administration is undertaking as part of the federal response to the spread of novel coronavirus in the US.

Officials on the White House coronavirus task force indicated during a White House briefing on Tuesday with the President that they hope to "flatten the curve" of US diagnoses of coronavirus through self-imposed quarantine and isolation recommendations. They were also focused on other measures to alleviate the economic and infrastructural impact of its spread.

"The state is working on it very hard themselves, but we'll probably supplement what they're doing," he added.

He also offered praise for Cuomo after criticizing him on Twitter earlier Tuesday.

To deal with the economic impact of the virus, Treasury Secretary Steve Mnuchin said during the briefing that the administration was "looking at sending checks to Americans immediately."

Mnuchin was also emphatic that stock markets will remain open during the coronavirus pandemic, but suggested there was a possibility of shorter hours.

He also said the administration will allow Americans to defer up to $1 million in payments to the Internal Revenue Service for 90 days.

"All states can now authorize tests developed and used within their borders in addition to the FDA," Trump said.

The President also said the administration would be expanding accessibility to telehealth services for individuals using Medicare.

"Today we're also announcing a dramatic expansion of our telehealth services. Medicare patients can now visit any doctor by phone or video conference at no additional cost, including with commonly used services like FaceTime and Skype," Trump said. "In addition, states have the authority to cover telehealth services for their medical patients."

Centers for Medicare and Medicaid Services Administrator Seema Verma said during the briefing that Medicare beneficiaries who were previously limited to telehealth services based on their location "will be able to receive a wide range of services via telehealth without ever having to leave home."

Trump added that the administration "will not enforce applicable HIPAA penalties, so that doctors can greatly expand care for their patients using telehealth."

The Health and Human Services Office for Civil Rights is responsible for enforcing HIPPA violations, and the agency said Tuesday that that office wouldn't enforce violations.

Verma said the change will allow doctors to "provide telehealth with their own phones."

"We'll be using enforcement discretion when it comes to collecting copays so that costs won't be a barrier," she added.

Dr. Deborah Birx said during the briefing that the Trump administration was also evaluating conclusions made in a modeling study which indicated that 2.2 million people could die from the novel coronavirus if no action was taken by the government.

It's unclear when all these mitigation measures taken by the Trump administration, states and localities will have a visible effect, National Institute of Allergy and Infectious Diseases Director Dr. Antony Fauci said.

"It probably would be several weeks or maybe longer before we know whether we had an effect. And maybe, at the end of the day, we'll see a curve that would've been way, way up. But I wouldn't, like, put us to task every few days. 'Well wait a minute, it's going up, is it working or not?' That would be really misleading if we do that," he remarked.

CNN's Betsy Klein and Kevin Liptak contributed to this report.